New York women are celebrating 100 years of voting this November to kick off a 3-year commemoration of the ratification of the 19th Amendment. A series of centennial exhibits, special events, and suggested activities are listed by the New York State Women’s Suffrage Commission. 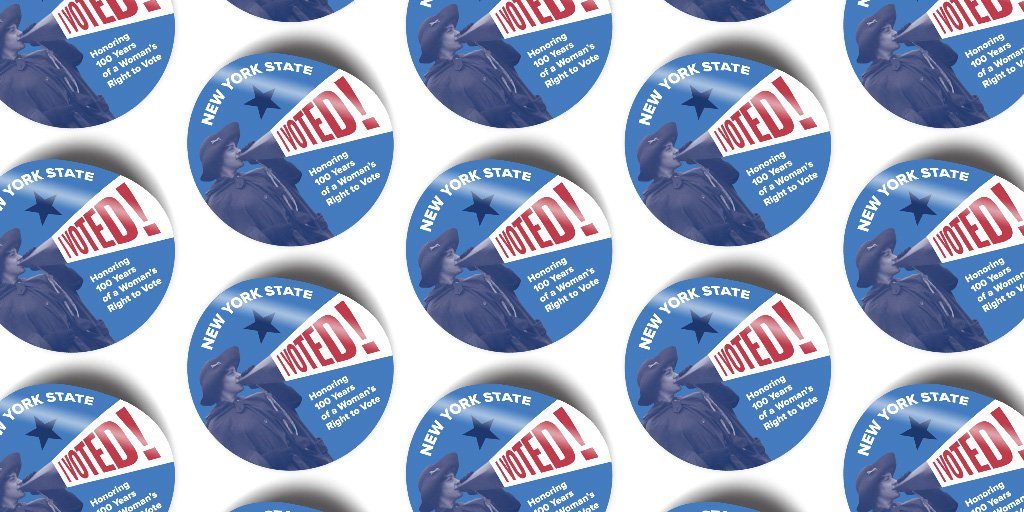 On election day, millions of New Yorkers were able to take home their very own special edition women’s suffrage centennial “I Voted” stickers produced to increase public awareness and education on this historic commemoration.

The fight for women’s suffrage did not come easy. The famous suffragettes were up against a political system developed by men to exclude women, disinvestment from fellow disenfranchised women, and a a barrage of cruel anti-suffragette cartoons widely circulated with other propaganda. 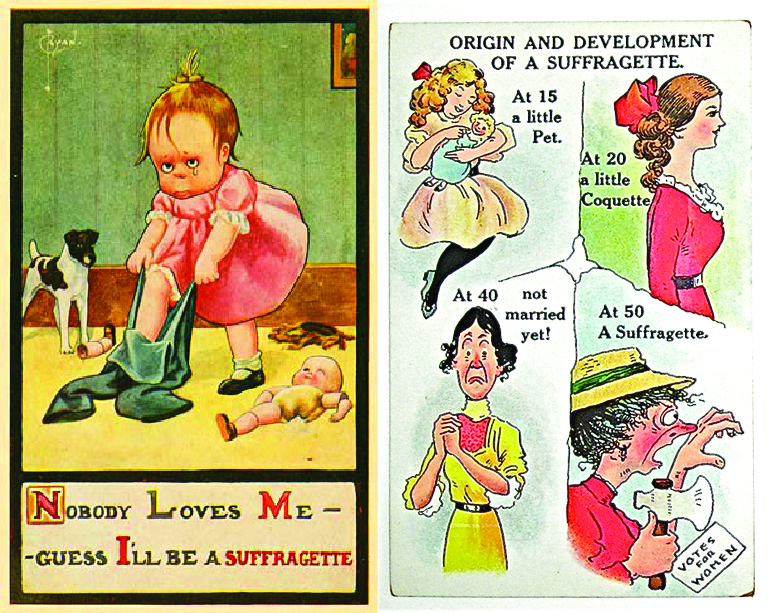 Standing on the steps of city hall with less than 24 hours left to educate voters, community organizers, local leaders, and engaged citizens stood side by side expressing their pride in 100 years of women voting while also urging voters to vote on ballot measures. 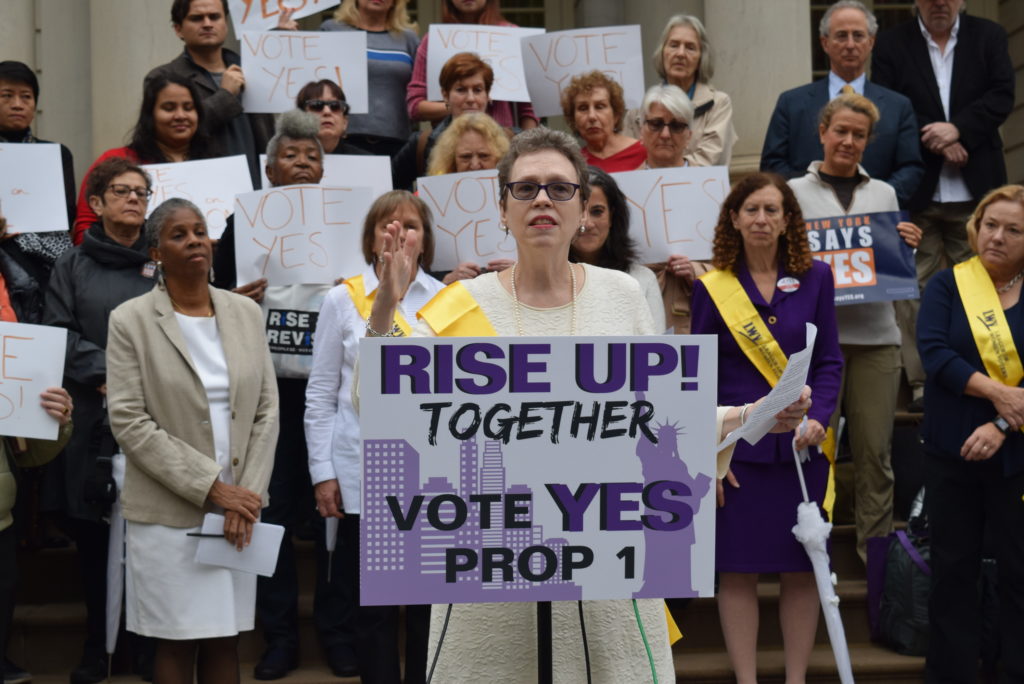 While most of the group’s participants were focused on their campaign in support of Proposition 1, some voices were taking a moment representing their communities’ and personal perspective on women’s right to vote. 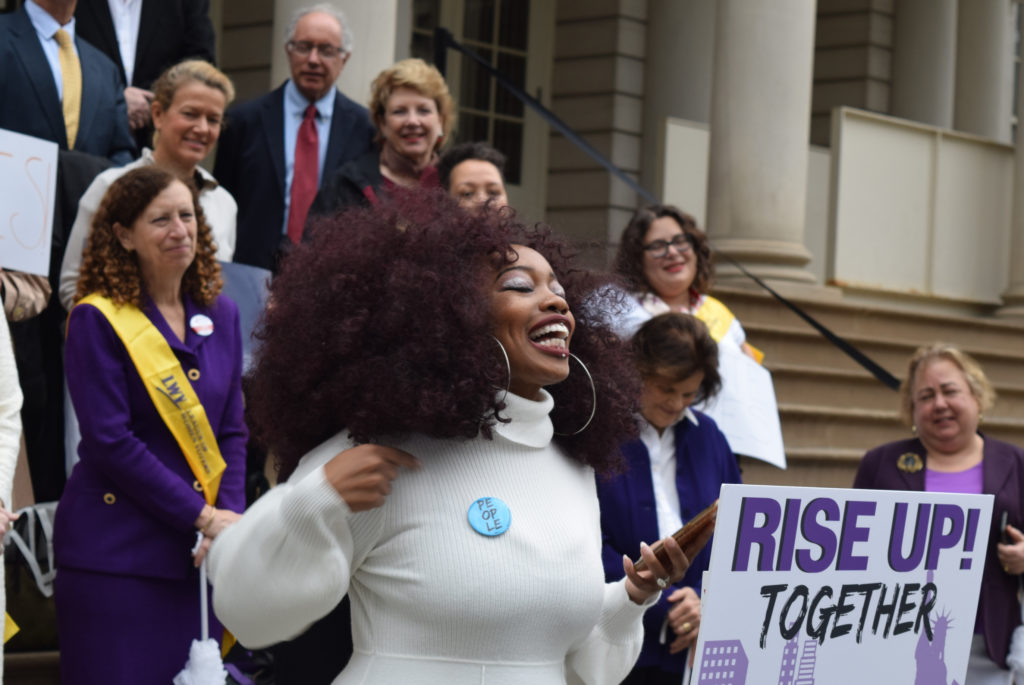 After an impassioned and poetic speech, the reality star and international educator Minista Jazz offered her thoughts on what this movement means not only for women, but also black women in America. “Without political agency, there is nothing in this country and for so long we’ve been oppressed because of that,” she says. Like many women, she is excited to see more women voting, running for office, and hopefully becoming president one day. Voting is one step to a more equitable world, but Jazz also emphasized the need for stronger education to fix intergenerational problems and systemic issues. “The racist systems that are in place are more cleverly disguised and because we have access to certain things, it feels as though we are free, but the mental slavery that is happening right now is debilitating,” she says.

Some organizations are working to educate and empower youth to build the next generation of informed women voters. Jewel Cadet of the Center for Anti-Violence Education also wanted to represent the forgotten voices of the suffragist movement. 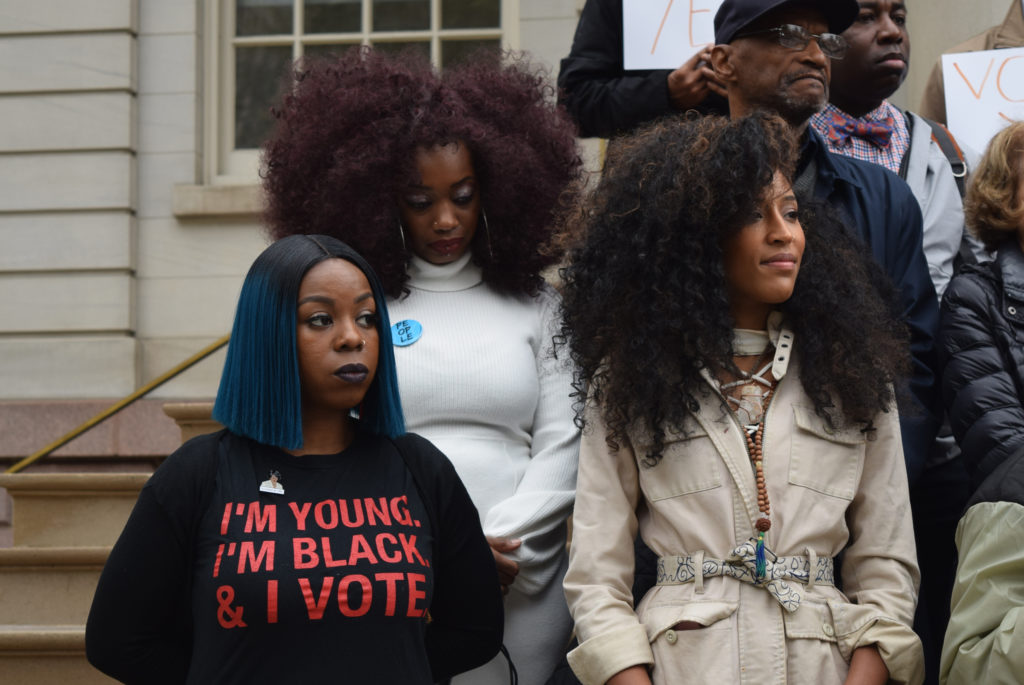 “We’re here celebrating 100 years of New Yorkers, women who were able to vote, but that was really white, cisgender, straight women,” says Cadet. “There was not one black woman who was involved in the Seneca Falls convention. We have to highlight that.” Focused on celebrating the work of black women’s rights pioneers like Sojourner Truth, Ida B. Wells-Barnett, and Shirley Chisholm, Cadet wants this centennial to discuss those who were erased from the history books. “When we talk about women’s rights, we really have to be intersectional,” she says. “Yes, there’s progress but we still have more work to do.”

Later that evening, Governor Andrew Cuomo and Lieutenant Governor Kathy Hochul announced that statues of Sojourner Truth and Rosalie Jones will be erected on two separate state properties as a reminder of their tireless battle for women. In a series of resolutions marking the “first day of the next 100 years,” Hochul encouraged women to rise up. “We will transform leadership in the corridors of power. Whether it’s in board rooms, the top of capitol hill, the state capitol, or in our city, we are going to change the balance of power. We will lead with strength and inclusion and most importantly, we will lead with integrity.” 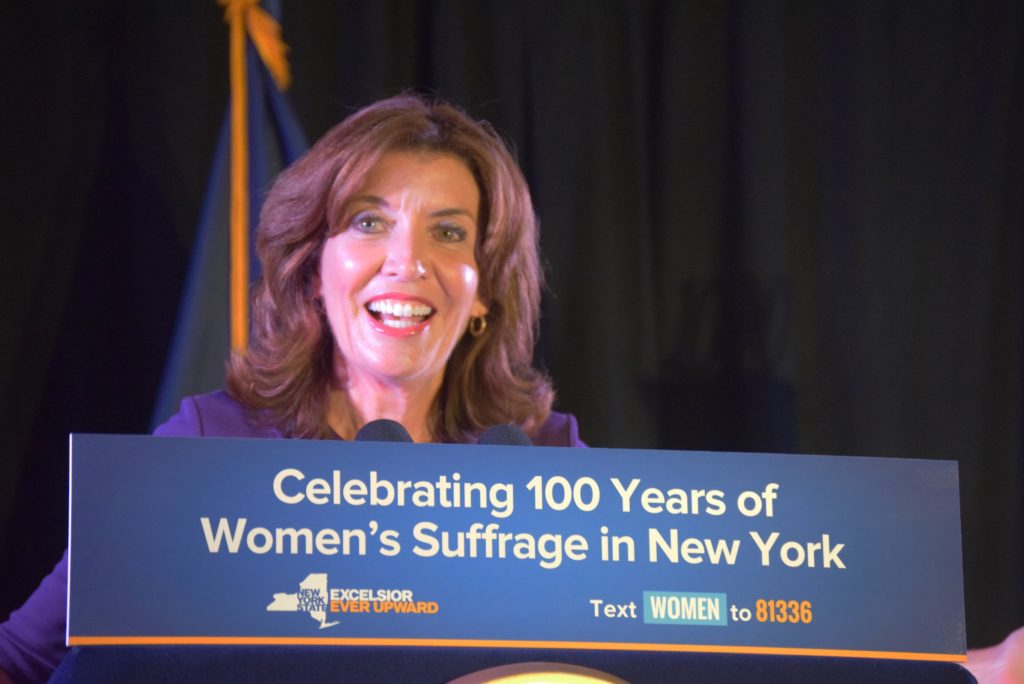 A few dozen men were sprinkled in a sea of hundreds of women celebrating at a special event with speeches and video testimonials from the Lieutenant Governor, Minority Leader Nancy Pelosi, US Representative Carolyn Maloney, and many more prominent female politicians.

With messages of pride, empowerment, and feminist support, the underlying message was clear: when women vote, women win.

“As someone who works with women who barely have a right to their own body, I think we take a lot for granted and shouldn’t take the right to vote for granted,” says event attendee Alex Hladick. “We should participate in government, vote, and be engaged politically because it matters.”

Marjan is a graduate student at the NYU Journalism Institute. She is interested in the storytelling of marginalized voices from a transnational perspective invoking notions of interconnectedness, intersectional feminism, and global citizenship.
View all posts by Marjan Riazi →
Tags: centennial, representation, suffrage, Voting, voting rights, Women, women's rights