Now that tattoos have gone mainstream, with some polls finding that 47 percent of millennials have at least one tattoo, it is common to see a wide variety of different types of people with tats.  However, the ones giving the tattoos are still very much a boys club reflecting a tattoo parlor culture that has a history deeply-seated in misogyny, according to those close to the industry.  Triple Diamond Tattoo in Gowanus, Brooklyn exemplifies how tattooing culture is starting to evolve but experts say there is still a very long way to go.

“I always had a rule that I would only work at a tattoo parlor if there was already another woman working there,” says Hillary Blair on her job search process. She found what she was looking for at Triple Diamond who is co-owned by Shannon Moran and Jon Lane, an entrepreneurial tattoo power couple.

Tattoos were first embraced into the American mainstream by sailors amid World War II before becoming a symbol of counter-culture in the 60’s and 70’s when biker gangs took to tattoos to brand their members. Dr. Beverly Thompson is a Sociology professor at Sienna College and author of Covered in Ink: Tattoos, Women and the Politics of the Body.  She says that is from these “masculine subcultures” where the prejudice in the industry stems from which has led to the “male-dominated industry we see today.”

Before becoming a tattooist, artists must complete an apprenticeship which can last anywhere between one to five years.  It is during this process where gender inequities are most evident.  David C. Lane is a sociology professor at the University of South Dakota and claims to teach the only collegiate-level course on tattooing in the entire United States.  He’s done extensive research on the tattoo industry for his upcoming book The Other End of the Needle: Continuity and Change Among Tattoo Workers.  “How many times have I interviewed female tattooist and the only way to get an apprenticeship was to essentially by having sex with the right person in power,” says Lane on his research.

The barriers for women in the tattooing world are stark. “The thing about the tattoo industry is that it’s very resistant to change,” notes Blair.  Her sentiment is echoed by Professor Lane, who says his research has taught him “tattooist really value the idea of tradition, doing things like they’ve always been done. Because they adhere to such traditions, women are de facto excluded from mechanisms to get the kind of training where they might be legitimated amongst their male counterparts.”

Dr. Thompson estimates that only 20% of tattooists are female but there is hope among the community that this will change soon. A Harris Poll from 2015 estimated that 31% of females in the US have tattoos compared to 28% of males. Blair believes that this is forcing traditionalist, misogynist tattoo parlor owners to reconsider their recruitment policies.  “So many women get tattoos in the rib area or in places where they’d have to take off clothing and it just feels so much safer if it’s another woman doing the tattoo for you,” says Blair.

The nature of the industry also gives hope to Dr. Thompson that female tattooists will be fairly represented sooner rather than later.  Thompson notes that the industry “has a huge rate of turnover so people who aren’t very good are just going to be spit out real quick. Women have a lot of chances to get into this industry and prove themselves.”

Triple Diamond Tattoo has one apprentice who, while not female, the hire is still opening doors in other ways.  Fyodor Pavlov is a 31-year-old Russian immigrant one year into his apprenticeship at Triple Diamond.  Pavlov is also trans and bi-sexual.   “Triple Diamond has just been fantastic in how I’ve been treated here,” says Pavlov. “They have faith in my talent and that one day I can be an artist that other non-cisgender, non-heterosexual people can come get a tattoo and be comfortable with, because a tattoo is not just art, it’s a very intimate experience and you want to make sure the person doing that with you is going to be on the same level.” 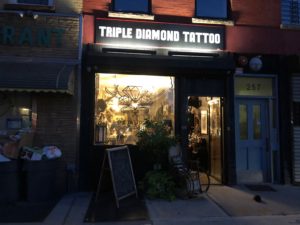 When a tornado rips through Alex’s native Kansas, he and his trusty dog Boning are whisked away to the magical land of 20 Cooper Square. There, they follow the Yellow Brick Road to meet the Wizard: Cora Daniels. On the way, they befriend Sabena the Scarecrow, Louise the Lion, and Ebrima the tin man. They are confronted by Alex’s arch-nemesis, Yue the Wicked of the West and her thugs Laura, Emily, Lauren and Ziyu the flying monkeys. Love wins in the end and now Alex is in journalism school. Berto was there too.
View all posts by Alex Tabet →