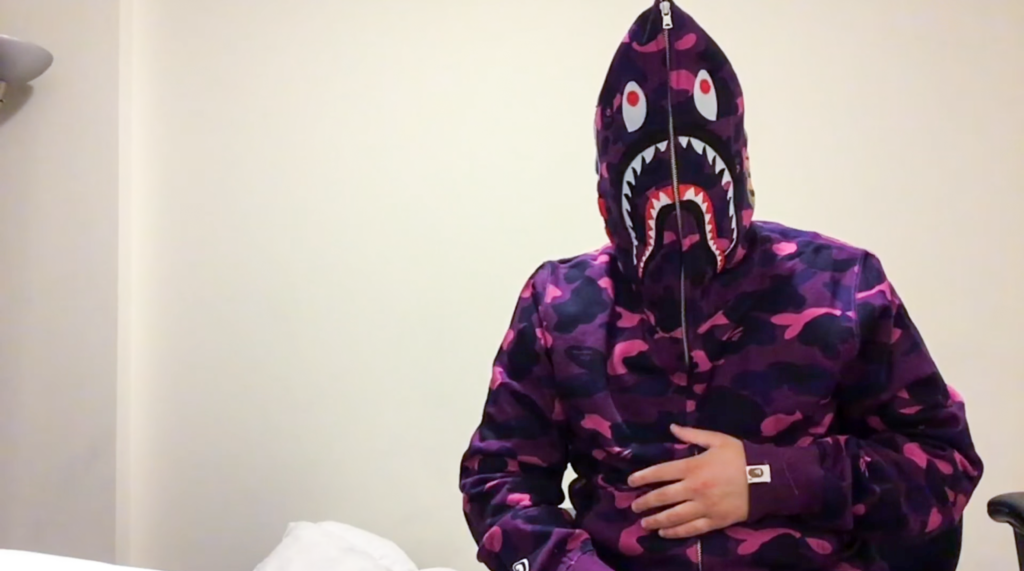 Bsis wearing his Bathing Ape Full-Zip hoodie that he received from his replica haul.

AJ Bsis is tired but anxious as he plops down on the edge of his bed. His hands caressed a 4.5kg package just recently delivered from the post office. Inside of it, clothing and accessories from premium streetwear brands like Supreme, Bathing Ape and Ray Ban. Usually, high-end designer clothing brands like these cost hundreds or thousands of dollars in stores or online. They are highly sought after because of their limited release and status symbol recognition. But for Bsis and many young adults like him, who relish the exclusivity of premium clothing brands but cannot afford the high prices, take an alternate route, by buying counterfeit clothing items from sellers in China and have them shipped to the United States for a quarter of the price.

“I’ve found the main reason I’m into replicas is a combination of the money and the scarcity,” said Bsis. “But if someone has the money they can buy anything, so in reality money is the main factor.”

Bsis, 18, originally got involved in streetwear from a friend and soon thereafter learned about the replica market and its enticing prices from Reddit, a community-driven forum. Like Bsis, many streetwear replica regulars start out trying to buy the real thing online, but usually fall short when the product sells out in seconds. Resale items can double and triple in price just as fast leaving young budget conscious fashionistos with little choice. “I was actually copping some legit pieces before I got into replicas,” said Bsis, who also regularly reviews his replica clothing hauls on his YouTube channel.

Counterfeit clothing is not a new phenomenon. In 2016, the global trade of fake goods was worth half a trillion dollars, according to The Organisation for Economic Co-operation and Development. Although fake Coach bags and Rolex watches may seem commonplace in the United States, a whole new grey market has arisen in response to the high prices of streetwear fashion. Supreme, a New York skateboarding fashion brand that started in 1994, sells box logo sweatshirts that retail at $148. On some websites like Grailed, a community marketplace that focuses on men’s fashion, Supreme box logo sweatshirts can resell for $500 to over $1000 depending on limited availability and seasonal release. Bathing Ape, another recognizable New York streetwear brand has similar prices, with popular full-zip hoodies retailing between $200-$400 and reselling for upwards of $600.

Because of intellectual property and copyright laws in the United States, replicas are rarely produced state-side. Sellers in China dominate the market and sell their shoes and clothing on websites like Taobao (a Chinese e-commerce site similar to eBay) or through messaging services like WhatsApp and WeChat.

Bsis, who mostly browses the fashion replica subreddit, finds W2C (an acronym used in the community that stands for ‘where to cop?’) links to Taobao for the replica products that he desires. He will then send these links to a third-party agent in China that will order the items and ship them to a warehouse in Shenzhen or Hong Kong. When the third party agent receives the clothing, they will take photographs of each item individually and send them to Bsis to check the quality and to see if the items are 1:1 (measurement slang in the community for how close the replica looks to retail). After looking at the photographs, Bsis can then decide to return the item to the seller or to ship the item anywhere in the world.

Shipping counterfeit items to the United States is risky as United States Customs and Border Protection ban materials that resemble or are of similar nature to any copyrighted material. To avoid seizures, replica buyers split their hauls into smaller packages and declare smaller dollar amounts on their packages in order to avoid duty taxes.

Gong Haixing is the CEO of Superbuy, one of the most popular and most widely used agents for users on the replica subreddits. The company was formed in 2012 when Haixing began exploring the worldwide market. But for Haixing, the replica market is not the majority of his business, where millions of customers are served millions of packages per year, according to Haixing.

“I think most of our customers are buying non-replica items, they like the good quality and low price of today’s Chinese products,” says Haixing. “Superbuy does not support or encourage replica business. As a shopping agent, we help people to buy items being sold on Taobao.” 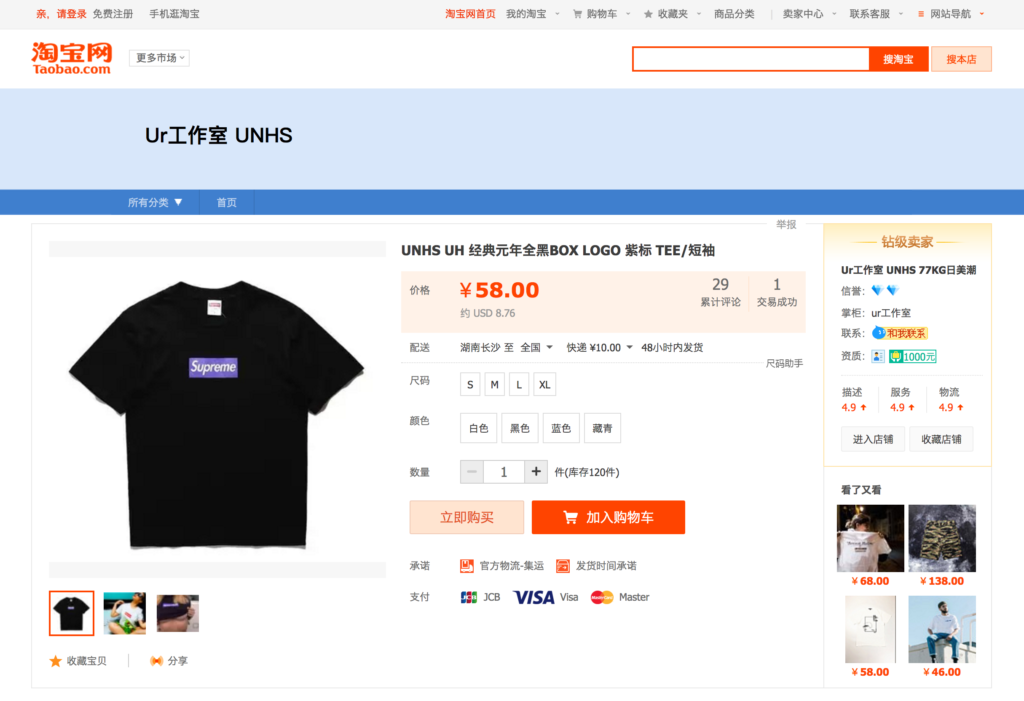 For Haixing, Taobao is to blame for replicas being shipped overseas and he argues that Superbuy can do very little to stop the influx of replica orders.

“We can’t control the behavior of Taobao and the sellers on Taobao, so we have to trust that Taobao will do what they should do to forbid counterfeit items,” said Haixing. “It is Taobao’s responsibility for the legality of all the items selling on its platform, not only in export market but also should be done in local market of China”.

Toabao disallows the selling of counterfeit or replica items on their platform, and regularly purges sellers’ accounts that are found to be fraudulently selling replica clothing.

Although Superbuy semi-excludes replicas from being shipped through their agent center from Taobao, the website does include an expert service option, where users can have an agent contact a seller to buy directly over a messaging service like WeChat or through Yupoo, a Chinese image-sharing website where sellers have unofficial stores.

But for many who wish to avoid the hassle of shipping through a third party agent, users will attempt to buy directly from sellers and middlemen. Chan, a popular sneaker middleman in the community, buys shoes in bulk from different factories around China and re-sells them to US and Chinese buyers. Many times, US-buyers will avoid buying directly from factories like that of PK (PerfectKickz), because of their prices and lack of customer support.

Superbuy gives replica buyers protection against scammers, as they are able to check the items before shipping internationally to their homes. When buying directly, sometimes issues can arise.

Sometimes sellers attempt to bait-and-switch items, advertising a product and providing high quality pictures to only quickly swap out the product for a lesser-quality item, according to Bsis. Some US buyers, who are weary of inputting their credit card information on replica websites, will use services like Privacy.com, a website where users can link their bank account to create burner cards and limit their exposure to identity theft.

For Bsis, the replica market doesn’t dissuade him from buying legitimate items, but makes things affordable to a population that doesn’t have the opportunity to purchase items they see the rich and famous owning.

“The average consumer doesn’t have $750 more to spend and they certainly should not miss out on cool brand names and decent quality because the top 1-percent can afford something as mundane as a Supreme hoodie,” said Bsis. “I don’t feel any different after purchasing what I have purchased and that’s how it should be, it shouldn’t affect your life drastically. They’re items, materials, mundane things that you can go without.”

Nicholas Perrone is a multimedia journalist with a passion for visual storytelling. He has an interest in tech, political, and breaking news reporting.
View all posts by Nicholas Perrone →
Tags: bape, counterfeit, fake, market, reddit, replica, supreme, taobao, yeezy