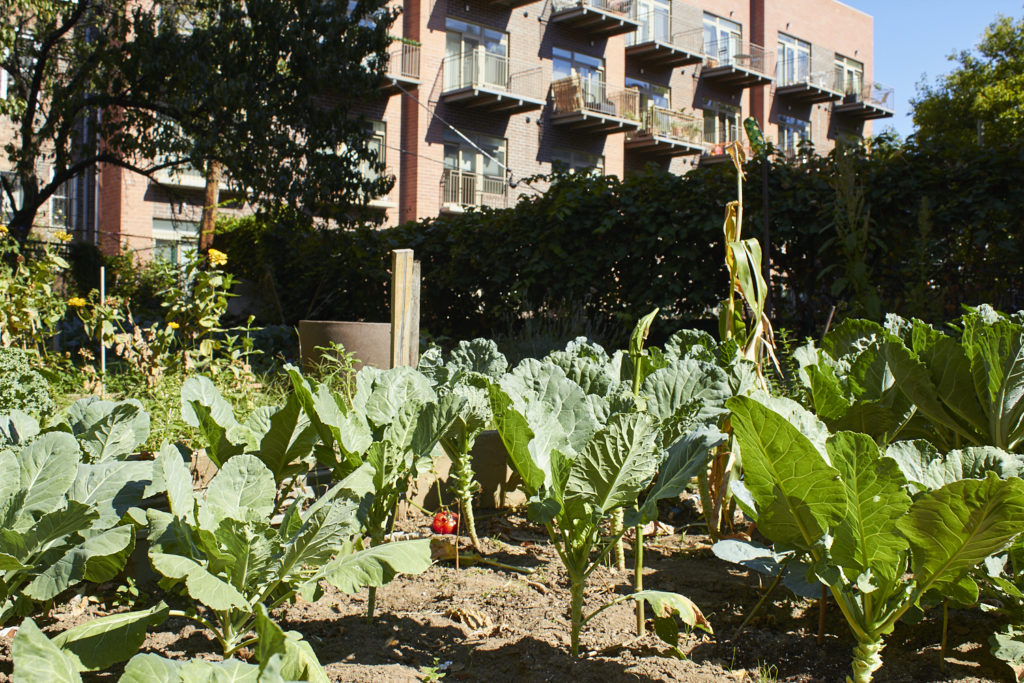 In a city where a vacant lot can be worth millions, city-owned community gardens in Bedford-Stuyvesant face the constant risk of losing their land.  For New Harvest Community Farm on Vernon Ave, it looked like that was about to become a reality.

After more than 20 years in the community, garden facilitator Abdul Muhammad got a call 6 months ago and was notified that this year would be their last year.  The city would bulldoze the garden to make way for affordable housing.  “I don’t like it… we’ve had this garden, we’ve raised the trees since they were babies,” Muhammad said.  “We went to meetings and stuff about affordable housing, but when they say affordable, it’s not going to be affordable for anyone in the community.

Northeast Brooklyn Housing Development corporation was awarded the contract back in 2016 to construct housing on the four lots New Harvest is currently using.  However, no plans have yet been announced for the site.  NEBHDco did not respond to multiple requests for comment, but according to former City Council candidate Ede Fox, “NEBHDco doesn’t know what they’re going to do with the lot yet.” However, Muhammad said that the city has been threatening to take the land off and on for the last 15 years, “so who knows, we may be gardening again next year.”

The experience at New Harvest isn’t unique. In the late nineties, the Giuliani administration began selling tax lien debt against many of the city’s community gardens to private banks to foreclose on.  As the gardens started to disappear, two private land trusts stepped in to to save the gardens that remained.  The New York Restoration Project, founded by Bette Midler, purchased 52 and the Trust for Public land, bought another 64 of them– these gardens are largely safe from development barring imminent domain. Gardens that are currently in city ownership today are more tenuous in their continued year to year operations.  While the Parks Department owns a majority of city gardens, the Housing Preservation Department also owns a number of vacant lots in the city, many of which have been turned into gardens.  These gardens have a year to year lease with the department, as was the case for New Harvest Community Farm.

“The city can come at any day and take the garden back,” said Demetrice Mills, Board President of the Brooklyn Queens Land Trust.

But the most jeopardized gardens are privately owned. “Those gardens were sitting on private land.  They’re vacant lots for a number of years, and the community residents took the properties over and cleaned them up and started gardening on them,” said Mills. “With this real estate market the way it is today, every property is valuable.”

Just this scenario happened to Weeksville’s Imani Community Garden on Schenectady Ave.  Imani sits on three individual lots, all of which were believed to be owned by the New York Restoration Project.  However, gardeners at Imani recently learned that NYRP only owned 2 of the 3 lots.  Unbeknownst to the gardeners, the third lot was foreclosed on due to a $12,000 tax lien. In April of 2016 that lot, home to an 80-year-old willow tree, was sold to developer Mandy Deutsch for $500,000. “The guy who bought this, if he has his way, he’d build 7 apartments here,” said Greg Todd garden facilitator. Todd and NYRP hope to meet with Deutsch and arrange to swap lots in order to save the tree.  “If that meeting doesn’t happen, then it’s time to start chaining ourselves to trees,” said Todd. 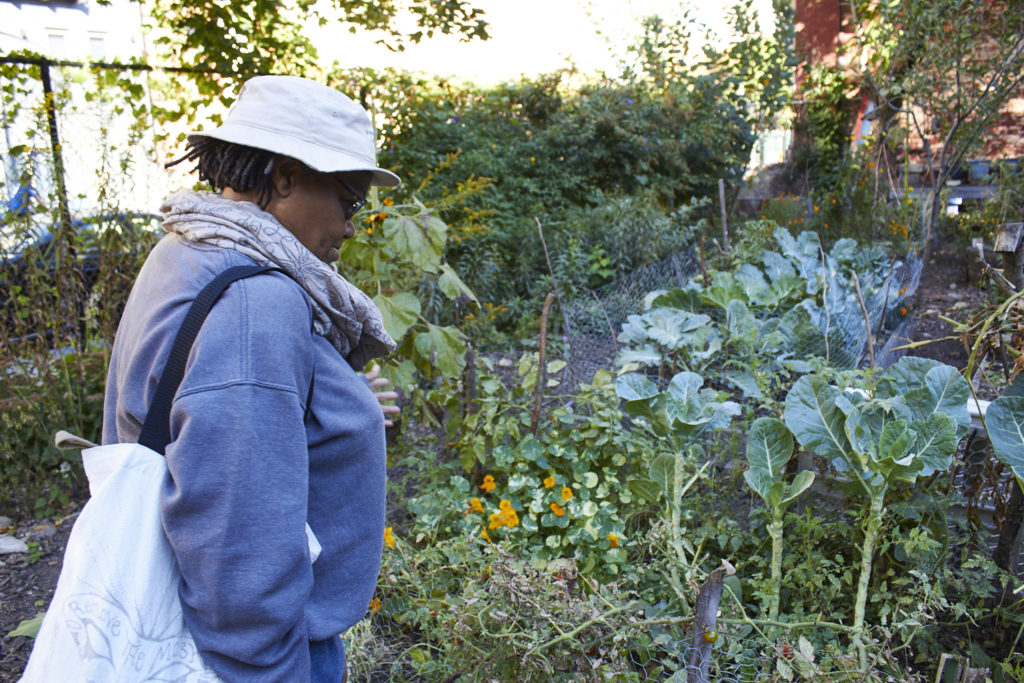 Eda McPherson shows off the collard greens at Tranquility Farm

Another city-owned garden, Tranquility Farm on Willoughby Ave recently won a battle to keep their land. “We were on the selling block a year ago,” said Eda McPherson, lead gardener.  “We had to advocate for a whole year.  The community went to bat for us. We were successful, but we were the biggest.  We could have held 3 buildings.”  After making their case to the city, Tranquility Farm was conveyed from the Department of Housing Preservation to the Parks Department and is now largely safe from future development of affordable housing. But, McPherson believes the farm is contributing to the neighborhood in other ways. She estimates that Tranquility Farm has donated more than 500 pounds of food to low income individuals in the last 4 years.

In addition to helping feed the community, local elementary school classes come to the farm to learn about healthy eating and of course to play with the chickens. Tranquility Farm and other gardens in the area have partnered with nearby Lyons Community School, a neighborhood school that focuses on experiential learning. “They use woodwork to teach the kids to think critically,” said McPherson. Students from the Lyon’s school spend the semester building a gazebo for each garden. Every semester 16 students take on the project, and after 7 years of the program, the kids have built 14 of them. “The big take home [for students] is that school is meaningful, learning is meaningful, math is meaningful— all those things can make a difference, and the kids can make a difference,” said Dan Vitali, lead teacher at Lyons. 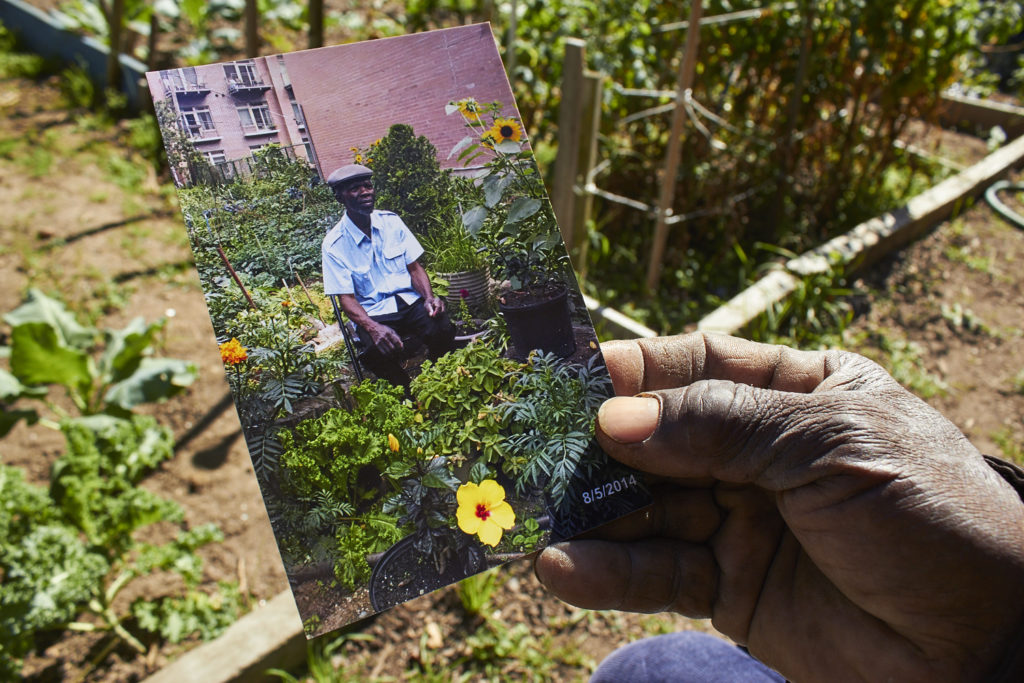 Just a few blocks away, Cedar Tree Garden one Greene St. is flourishing despite the rising cost of real estate. A vacant lot just across the street is selling for $2 million. But Cecil Prince, facilitator at Cedar Tree Garden, has three lots that size. “Lots of developers are coming to New York now, and I feel one day sooner or later the city is going to say ‘we need to have this lot, because we need to put up affordable housing,’” said Prince. “That’s the only thing I’m afraid of.”

Forty years ago, he and his father put up a fence to keep out the neighborhood kids, because they kept breaking his windows while playing ball. “We thought, well we could put a garden here,” said Prince. “I noticed there were a lot of single parents in these homes in Brooklyn, in my community. And I noticed people were going to bed hungry right here, so we started the garden so we could give back to people in the community.”  Prince estimates that he gives away food to more than 70 of his neighbors over the course of the season, and enough food to last a family about four days. “I give them a little of everything from the garden,” said Prince. “Everyday I give away something.”

Despite the risk to city-owned gardens, these urban farmers are hopeful that they will continue to serve the community in the coming years. “I figure we work for the community,” said McPherson. “They help us, they encourage us, and we know they’re rooting for us.  At the end of the day, it’s a beautiful thing.”