Bringing Activists Together through Yoga 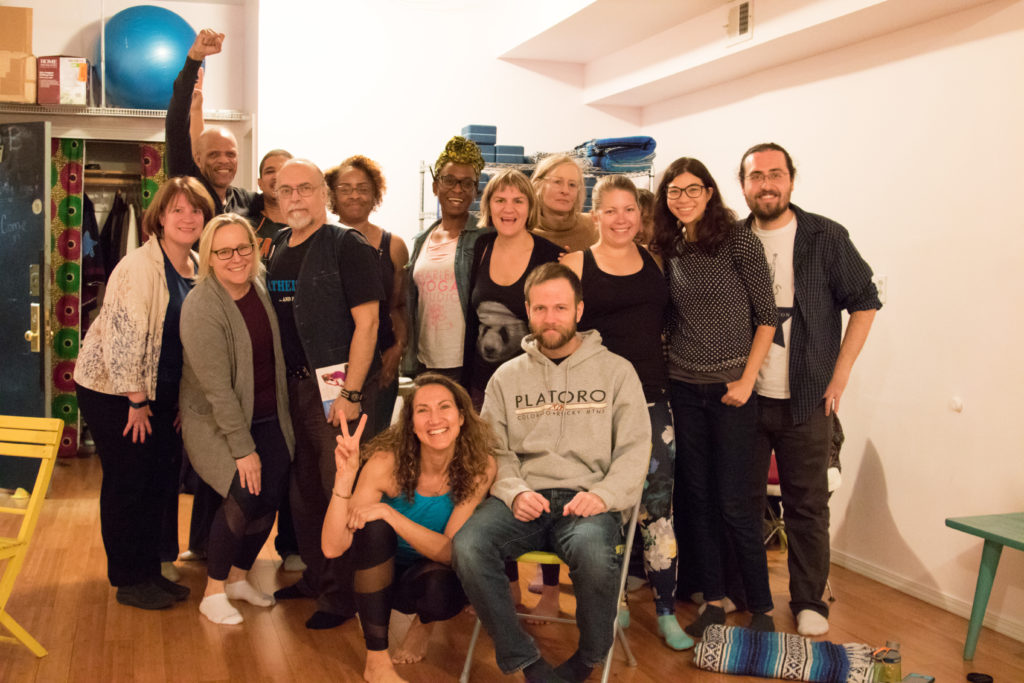 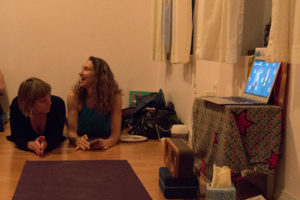 At the top of two sets of narrow stairs off 125th street, 23 people sat on yoga mats, folded blankets, and chairs in a room usually reserved for yoga. Tonight, however, there was no lotus poses or downward dog sightings, instead, the room was filled with men and women of all ages and races who sat waiting to learn about voter suppression and how they could stop it.

It was the October 1st session of Harlem Yoga Studio’s monthly Mindful Community in Action event series, which picks a different local or federal issue each month and brings community members together to find ways to take action. This month, the studio partnered with the ACLU’s grassroots organization PeoplePower to broadcast a livestream of their Let People Vote campaign launch.

“One person can’t be well unless the community, unless we’re all well,” said Erica Barth, co-owner of Harlem Yoga Studio. That thought is the driving force behind using the studio to promote wellness beyond yoga.

“Sometimes it just gets so frustrating,” said event attendee Martha Baratz, speaking about trying to drive change through political activism. She had never been to Harlem Yoga Studio before, but she learned about the event because she is actively involved with PeoplePower.

That frustration is the reason Barth believes that yoga studios are uniquely equipped to help people become politically active without overexerting themselves or getting overwhelmed. “We were like since we’re a yoga studio let’s do a thing where you can be in your body, you can relax, you can not be as activated,” she said.

Harlem Yoga Studio did not start as a place to promote political activism, but it has always aimed to bring the community together. “As the neighborhood was gentrifying I felt that the neighborhood needed there to be more yoga and places where the community could gather in helpful ways,” said studio founder Laurel Katz-Bowen. Her goal was to create “a place that was dedicated to keeping the classes accessible and affordable before a bunch of overpriced studios that weren’t committed to that opened up.”

In this vein the studio offers many beginning classes as well as classes that serve specific communities including pre-natal yoga, full-figured yoga, trauma informed yoga, and classes for children, all which the studio is committed to keeping on the schedule even if turnout is too small to make money, said Barth. A drop-in class at Harlem Yoga Studio is $14, but they also have five donation-based community classes a week where the suggested donation rate is $8. At nearby Unity Yoga, a drop-in class is $30.

Harlem Yoga Studio’s first foray into political activism was New York’s Fight for $15 campaign, which sought to raise the minimum wage. When that went over well with the community, Barth helped run a series of meetings titled Yoga Vote, where people could come to the studio and “learn about the voting, go through the polls, really have discussions about it,” she said. During the 2012 election, they hosted calling parties in support of Obama. “It was like super fun and people were really engaged,” said Barth.

However, regular events did not start until after the 2016 presidential election. “Right after the election, we were pretty devastated,” said Barth, speaking about what sparked the idea for the event series. “Everyone was at home feeling miserable and alone, trying to make phone calls. We were like let’s give people somewhere to gather.”

The October Mindful Community in Action event marked another shift for the studio’s activism. Because they hosted the event with PeoplePower instead of alone, the ACLU marketed the event and brought new community members into the yoga studio.

Daniel Sanchez, who lives in the western part of Harlem, said that he had never been to the studio before but found out about the event through an email through the ACLU. “I wanted to learn more about voting,” he said, so he came.

Even though the content of the event was led by PeoplePower, Barth and Katz-Bowen found a way to incorporate yoga and mindfulness. Barth led an hour of yoga catered towards all levels at 6:00pm, before the official PeoplePower event started. The ACLU’s marketing had listed the event time as 7:00pm, so more people showed up after the yoga portion of the evening. While waiting for the livestream to start, Barth explained Harlem Yoga Studio’s Mindful Community in Action Series. The group then meditated together before grabbing snacks and watching the livestream of PeoplePower’s “Let People Vote” campaign launch, which discussed voter suppression laws and how as a community they could fight to change state laws.

When asked why he was at the studio, longtime Spanish Harlem resident Michael Mitchell said, “Most of my activism is behind me, but it’s time.”

The Harlem Yoga Studio staff shares the sentiment that now is the time to take action, although they’re still playing with the structure of what that action should look like. “We figured if we were with a bunch of people we might figure out what was the most effective thing to do,” said Katz-Bowen. “I still feel like I’m struggling with what to do.”