Take the 7 train, look up the events calendar, check out must-see destinations on the interactive map, enjoy cuisines categorized by regions, and find a historian as tour guide. The newly launched Flushing Fantastic website (http://www.flushingfantastic.nyc) wants to give tourists an easy trip-planning experience, and it bigger goal is to change people’s long-lasting impression of Flushing as more than just “Chinatown”. 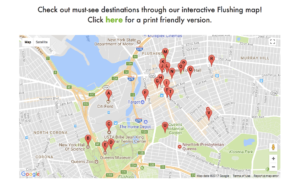 The interactive map on Flushingfantastic.nyc

“There are a number of perceptions that are superficial or not valid when you actually live in Flushing,” said John Choe, Executive Director of the Greater Flushing Chamber of Commerce. Regarding Flushing as only “Chinatown” is one of those perceptions.

John Choe considered it “a certain level of ignorance about (other) community.” He explained that there are many other ethnic groups in Flushing, and even in the Chinese community, there are people from different regions with different cultures and histories. For instance, there is a large Chinese Korean population in Flushing. Their citizenship is Chinese, but in terms of language they speak and cultural identity, they consider themselves Korean. In this case, calling them Chinese is incorrect to some extent.

According to John Choe, the website was launched by Asian Americans for Equality (AAFE) and the Greater Flushing Chamber of Commerce, as a component of the Flushing Fantastic district marketing campaign, targeting neighborhoods in Queens and other boroughs.

There is a block named “Local Spotlight” on the website, featuring Flushing-based film production “Sixty-First Production”. They just posted their first short documentary on local chef Helen You, owner of Tian Jian Dumpling House and Dumpling Galaxy. In the documentary, the chef talks about how she got to Flushing and her affection for this neighborhood.

“We want to profile the people and individuals in the community, more than how successful they are as business people.” said Daniel Nalladurai, co-producer of Sixty-First Production.

The first episode of documentary series entitled “Last Stop on the 7”, produced by Sixty-first Productions.

Chinese chef Helen You is just the first episode of this documentary series. Nalladurai wants to develop the theme of this series into female entrepreneurs in Flushing. He and his colleagues are working on following episodes about an Indian root tea business owner, and a Korean immigrant who owns a Taekwondo studio.

Nalladurai was born and raised in Flushing. He said he didn’t realize there were so many great food and events in Flushing, until he got more involved in the community. Although Sixty-first production has its own website and Facebook account, there is a large population of small businesses in Flushing that don’t know how to utilize social media and the Internet. He believes the website “gives voice to voiceless almost”.

According to the Chamber of Commerce, there are 6000 firms in Flushing, among which 80%-90% are small businesses with less than ten workers. Although local business owners aren’t the target readers of the website, they are very likely to benefit from this marketing portal.

As Councilman Peter Koo said, “a centralized marketing portal will capture, promote and weave together the many threads of Flushing’s small business community, service providers, and more so that all can enjoy the distinctive appeal that makes this community truly fantastic.”