An iPhone’s route back to China from Flushing 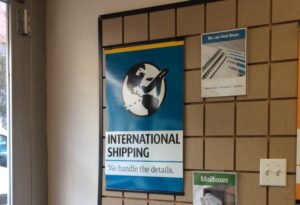 Ready for the upcoming iPhone X? The moment you are hesitating over the steep price — the $999 price tag makes it the most expensive new iPhone ever — another customer in China is ready to pay double for it. To avoid the competitive market in China which includes frantic Apple fans and aggressive scalpers, many Chinese customers turn to the overseas market to get Apple goods easier. As a result, the international shipping industry in Flushing, one of country’s largest Chinatown’s, is flourishing.

The market for buying and shipping overseas is vibrant. Chinese customers are used to buying products directly from America because US companies often release their products here earlier.  Even though China has been listed as one of the first release countries for the iPhone X many customers are keeping to the tradition of shipping from overseas because of the price.  Even adding tax and shipping fees buying iPhones in America is still often cheaper. In the case of iPhone X, 64GB, the price in China comes to 8388 RMB or $1264. 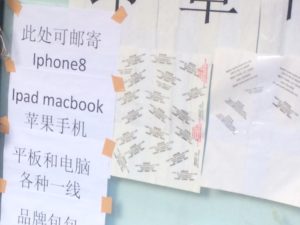 In this industry chain, people like Luo Qi who purchase commodities overseas for Chinese customers is called as Daigou. Generally, they are the most frequent customers for those Chinese shipping companies in Flushing. Luo’s business mainly concentrates on health care products, clothes, and shoes. Recently, as the new iPhone came out, some of her customers are asking her to buy one for them. She refused, however. “I went to a shipping company the other day and they told me the shipping price for an iPhone is $110. In this case, there is not much room for me to earn a profit.” Moreover, some of her packages were once lost during shipping and she did not want to risk losing something as expensive as an iPhone.

It is true that the shipping companies are not always reliable. Losing packages during shipping is not a rare circumstance and some times even the shipping company itself disappears all of a sudden. Last year, one of the biggest Chinese international shipping company, DCS Global Import & Export Inc., was shut down without notice. According to a Chinese news website, the manager of DCS was captured in China because of legal issues concerning smuggling. Thousands of packages waiting to be shipped back to China still remain in some unknown warehouse collecting dust.

Mark Wang, an employee at NExpress Station on 41st Street Flushing, told us there are more than 100 Chinese shipping companies in Flushing and he had witnessed more than one sudden shut down of one of his competitors. It is also not unusual in this industry, that some shipping company accidentally lose packages, according to Wang. When asked if such lost packages are confiscated by customs or lost by the company Wang replies: “I don’t have the answer. Only gods will know who will ‘receive’ the package. It is you who make the choice.”

Wang said their company used to ship iPhones for customs before the Chinese Customs told them not to ship Apple products this year. It might be the result of increasing iPhones smuggling cases in China. Last year within days of Apple’s release of the iPhone 7, Shenzhen Customs officers caught over 60 people trying to smuggle in the phones in just one day. According to the China Custom Regulations, if a package contains stuff that is not for personal use but for commercial purpose without declaring to the customs, it can be deemed as smuggling. If the shipping content is for personal use, generally it is tax-free if its value is under 1000 yuan or $150. Some exceptions for personal packages exceeding the value of $150 will be made by the Customs, but there is no fixed standard for that.

Wang said for one iPhone they used to charge their customers $100 shipping fees plus a 2 percent product value’s shipping insurance.  “All shipping fees and customs tariff are included. Our company will declare content for every package to Chinese customs and pay the tariff. If you bought the insurance, either it is confiscated by the custom, or broken or lost during the shipping, our company will be 100 percent responsible,” he said.

At CG Express, another shipping store on 41st Avenue, an employee offered the same $100 price for shipping with automatic custom clearance but also had a cheaper $60-dollars  option that came without customs clearance.  “If your package is selected to be examined by the customs, you will need to pay the tariff. But I am not sure how much rate you will be charged. And if not, you save the money,” said the CG employee who refused to give her name.

Harry Qian, the universal problem solver in the UPS Store in Flushing, also has no idea of how Chinese customs make the decision. But they will always ask the customers to be honest with the content of their package. In iPhone’s case, UPS will transparently mark it on the package “Gift, iPhone”, and he added that generally custom won’t charge you for one gift. But if they decide to levy a tax on the package, they will notify the customers and ask them to pay the tariff online. According to the UPS website, the estimated shipping price for a $999  iPhone is $149.60 (with an estimated package size of 10*6*6, 1lbs), excluding “taxes, duties and other charges that may apply to the shipment”.

“In past three weeks, they have shipped 2-3 iPhones,” Qian said of the UPS store. “Our price is higher than some local Flushing Chinese shipping companies, but we are 100 percent transparent and accurate, and also definitely faster and safer.”

As long as there are profits, there are people willing to take the risk. When browsing Chinese scalper websites, the estimated price for an iPhone X 64G is said to be 19999 RMB (or $2984) or higher. However prohibitive the price is, at least thousands of customers will scramble to buy one. For those who want to join the revelry in Flushing, the hardest decision may be to make the right choice for shipping.