100 Bogart is Bushwick’s newest co-working space development, towering over adjacent businesses. Touting the common perks of a co-working space – offices, conference rooms, kitchen amenities, and open work spaces – the facility opened its doors in late August and has garnered 40 sign ups to fill some of its 500 offices across five floors. Open to the public, its first floor gallery serves as a multipurpose room for educational events. The art, dance and performance that takes place there makes a lasting impression on pedestrians who walk by and that’s just how the owners like it.

“We wanted to make this a destination building and in order to have that, there must be value and reason to come here, make memories and have a space to learn, grow and challenge ideas,” says Diana Morgan, 100 Bogart’s Community Manager, about the programs and culture offered at 100 Bogart.

Co-working spaces have become a niche in the real estate industry, appealing to millennials across professions, mostly entrepreneurs, freelancers, designers and filmmakers. Converting vacant buildings into modish workspaces or rebuilding them from scratch, companies like 100 Bogart are pioneering what looks like the future of corporate America in less commercial parts of the city.

“A lot of corporate brands are going through a shift right now. They’re trying to be modern and progressive and have been inspired by the co-working industry because they want to have the perks of being in a smaller space where people work independently,” says Morgan. 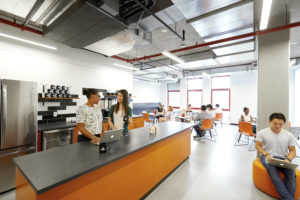 Since 2010, many smaller co-working spaces have trailed behind the market’s biggest contender, WeWork. In a mere seven years, the company became worth $20 billion and continues expanding over international waters. Offering memberships that start from $220, WeWork also manages 37 buildings in Manhattan, two in Queens and four in Brooklyn.

Smaller co-working companies older than 100 Bogart, like Brooklyn Desks, have been doing their best to fill the void in Bushwick since late 2014. It’s easier to challenge giants like WeWork in outer boroughs where customers want to find a more unique and flexible space on a tighter budget.

Nigella Miller runs her earthy hair salon from one of Brooklyn Desks 50 cubicles, where an array of businesses set up shop. “Only certain people are attracted to my salon; I didn’t want to have a space where anyone could just walk in and I didn’t want to be in a workspace [among] salons. That’s not my style. It’s a bit cheesy and too competitive. Four years ago this was the only affordable co-working space in Bushwick,” she says.

Although finance is an important deciding factor for members, people choose independent work spaces for different reasons. A few cubicles away, Alexis Castro helps run skateboard magazine, Jenkem, and argues that the mission of a co-working space is a lot different than what Jenkem uses it for.

“I think co-working spaces are designed to be collaborative environments where like-minded companies can cross paths and work on things together. I don’t see that happening a lot [for us] here. I think, because [Jenkem] is so niche, we keep to ourselves. [Brooklyn Desks] is a place to do our work so we’re not sitting at home distracted,” he says.

Co-working spaces are often better known for their culture and personalities like WorkAround, a workspace for parents and families. One of the oldest workspaces in Bushwick, Bat Haus is also known as a cozy and organic workspace in the area. Reconstructed in a garage formerly owned by a local plumber, Bat Haus came to existence about five years ago when founder Cody Sullivan says he “quit a full time job to go into freelance and got really sick of cafes and working from home.”

Housing a maximum of 60 people, Bat Haus has a garden, two lofted rooms, and long communal wooden tables. Some people join if they have a part-time job or if they’re starting a business. Sullivan has also noticed modest surges during recessions, but most people leave once they’ve found stable work or if they travel a lot.

According to the 2017 Global Co-working Survey, co-working space projections are stable and not much different from last year’s, but they show great potential, particularly on a global scale. An increase in members, income and events are anticipated to foster a stronger sense of community by roughly 81 percent. By the end of this year, over one million people will have worked in a co-working space and 14,000 spaces will be active worldwide.

In smaller co-working spaces like Bat Haus, occupancy fluctuation is noticeable, but profits have remained stable, says Sullivan. To maintain a steadier revenue stream, he rents out the space to locals for events like Quinceaneras and Bar Mitzvahs. “Bat Haus is a fabulous venue. My wife and I had our wedding there, and it could not have been more perfect,” says Michael C. in a Yelp review of the place.

Although Brooklyn’s co-working spaces can now be popular spots for work or schmoozing, they weren’t always successful space-shifting businesses.  “When we opened [Bat Haus] we thought we were taking a big risk,” Sullivan remembers. “We never thought there’d be other places out here [like ours].”

Rebecca Blandón is a native New Yorker driven by curiosity and compassion in her reporting. She has an affinity for stories on music, food studies, visual art, human rights, urban life, pop science, and identity politics.
View all posts by Rebecca Blandon →