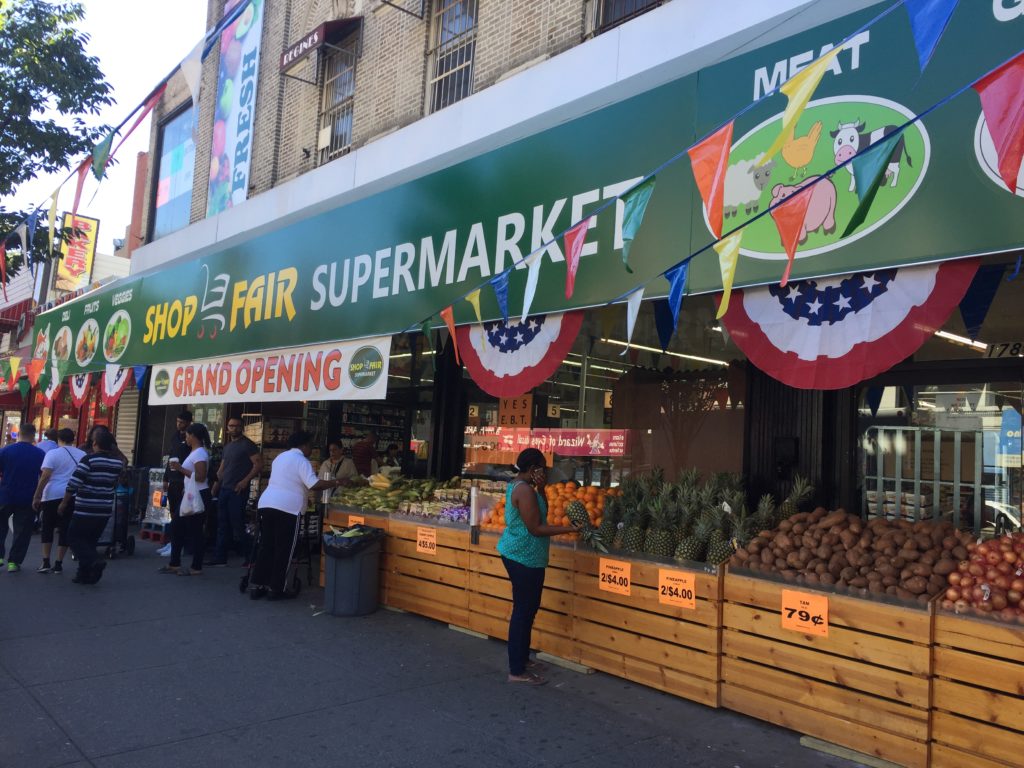 Outside the Shop Fair store in East Harlem, colorful banners fly above the sidewalk, fruit displays line the walls, and a “Grand Opening” sign hangs above the doorway, creating a celebratory atmosphere. Inside, customers have access to something their neighborhood has been missing for over a year: a full-service supermarket.

The new Shop Fair, which opened on August 19th and sits on 116th street between 3rd Ave and Lexington, is a welcome addition to a neighborhood that is often considered a “food desert.”

“It’s the only place locally,” said shopper Billy Pedlow, calling the store’s opening “pretty exciting.” He moved to the area about a year and a half ago, but this is the first time he has been able to do his grocery shopping close to home. “We were going all over the city trying to find different places to shop,” he said. “We were going to the Lower East Side Trader Joe’s. We were getting Amazon Fresh.”

Access to fresh, healthy food in East Harlem has long been a problem and has been compounded in recent years as other supermarkets in the area have been forced to close.

City Fresh Market, which was on East 116th Street near the new Shop Fair location, closed a year ago. “Losing yet another supermarket, to a landlord that refuses to extend a lease, will leave families traveling long distances to provide affordable food for their families,” wrote City Council Speaker Melissa Mark-Viverito and State Senator Adriano Espaillat in a joint letter released on asking Walgreens to help the City Fresh Market stay open.

“We realize that East Harlem is a huge food desert, especially with the closing of Pathmark,” said Anne Kadamani, Legislative Coordinator at New York State Assembly Representative Robert Rodriguez’ office. The Pathmark on 125th Street and Lexington closed in 2015, but the neighborhood is still feeling the impact of its loss despite a Whole Foods that opened this July just blocks away from the now vacant Pathmark building. Kadamani questioned whether the neighborhood’s residents, who come predominantly from low to moderate income households, can easily afford to shop there.

“East Harlem has enough food stores but they sell too much cheap, unhealthy food and not enough healthy, affordable food,” said Nicholas Freudenberg, Director of the CUNY Urban Food Policy Institute and Distinguished Professor of Public Health. He also said that the term “food desert” is “going out of favor among food policy scholars, as it looks mainly at access. Now, they “think quality and affordably are just as important.”

Shop Fair provides the community around East 116th street with access to a wide variety of healthy options. Although shelves of Oreos and Chips-a-hoy cookies sit to the left of the store’s entrance, bananas and peaches are displayed to the right. Turn the corner, and the store opens up to an expanse of fresh fruit and vegetables. While the store does not appear to carry organic produce or meats, there are organic selections available for other foods, including eggs, milk, and canned soups.

But, affordability may still be a question. “It’s overpriced,” said Alonso, another Shop Fair customer who asked not to give his last name but has lived in the neighborhood for years. “There’s nothing much to compare it to because it’s the only place here, but it’s not cheap. It’s bearable. It’s not Pathmark.”

Shop Fair’s prices are comparable to those at the Whole Foods on 125th Street, but Shop Fair customer Fabian Johnson, who has lived in East Harlem for ten years, called the prices at Shop Fair “really low” and “pretty cheap for the neighborhood.” His family had been traveling to the Western Beef at East 139th and Morris Avenue in the Bronx to do their weekly shopping and are now trying Shop Fair.

However, one supermarket cannot solve an entire neighborhood’s problems. “It’s great,” said Kadamni, “but it doesn’t help the people north of 116th street. Their options are still smaller grocery stores and bodegas.”