Eric He could not remember what America was like. The only thing he knew is that he was born in some hospital in Brooklyn and brought back to Fuzhou, China 6 months after birth by some relatives because his parents were too busy working to take care of them. It took over 10 years for him and his older sister Cindy, to set foot again in New York, alienated and afraid.

Eric and his sister are just two examples of the thousands of “Satellite Babies”, who were born in the U.S. and raised in China by other relatives and sent back to the U.S. again when they reached school age. Eric’s sister Cindy is 2 years older than him and experienced the same route after being born in the U.S. They spent their childhood with their grandparents in China and occasionally saw their parents via video chat.

It has been 2593 days since Eric and his sister landed in Flushing but he remembered clearly the moment he arrived in the foreign land. After being apart for a decade, he didn’t smile nor cry but was just expressionless when he met his parents in the airport.

He also remembered how challenging it was for a ten-year-old adapting to a new environment with a different language, lifestyle and food.  “For most of the time my sister took care of me and comforted me. She is the one closest to me in the earth,” said Eric, who is now 17, speaking in Chinese. Although he and his sister have Chinese names they refer to each other as Eric and Cindy.

When Eric and his sister first arrived his father was a private bus driver who worked the night shift most of the time. Eric remembers once his father took him and his sister to work. It was a long night sitting in the bus next to his father. The ten-year-old boy and his sister kept falling asleep and waking up the entire night until dawn when his father finally finished his shift. Now Eric’s father runs his own business but work still occupies most of his time.

“We still don’t get very close to our parents,” said Eric’s sister Cindy in Chinese.  Cindy, who turns 19 this March recently moved out to attend Hunter College in Manhattan. “We encountered many difficulties in adapting to our new life here, but our parents did not help at all.”

Attempts to interview Eric and Cindy’s parents were unsuccessful. Eric apologized that they were too busy working.

Lucy Huang, a graduate student studying social documentary at School of Visual Arts, is trying to do her thesis film on satellite babies but is having trouble finding parents who will participate. “It wasn’t easy for them to speak,” Huang said of the families. “They have a deep private feeling they don’t want to review in front of the camera.” 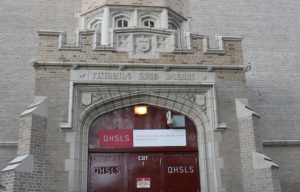 The parents-children bond is one of the most valued relationships rooted in Chinese people’s mind, and being absent in their children’s childhood is absolutely not a subject for parents to touch on. Huang thinks these cultural beliefs has made getting people to participate with her film difficult.

Eric now studies at Queens High School for Language Studies. According to the school website, this public high school consists of 50 percent of native English speaker and 50 percent native Mandarin Chinese speakers, under the NYC Department of Education guidelines. Stella Chan, the Director of Community Relations for Peter Koo, the councilman in Flushing, said he has always paid close attention to “satellite babies”.  In May Koo participated in a book signing for Satellite Baby a new book written by some of these children who are now in middle school, said Chan. The public schools here have limited seats for the newcomers and Koo’s office worked to increase the budget to gain more seats for the growing satellite baby population.

Despite the lack of closeness with his parents, Eric is still positive about his life in NY. He has made many new friends speaks both fluent English and Chinese now. “So far I felt everything is good,” he said. “Sometimes I missed my grandparents, but overall I think I have get used to living here now.”

And what does life look like back in Fuzhou now? That might be a new question for him.