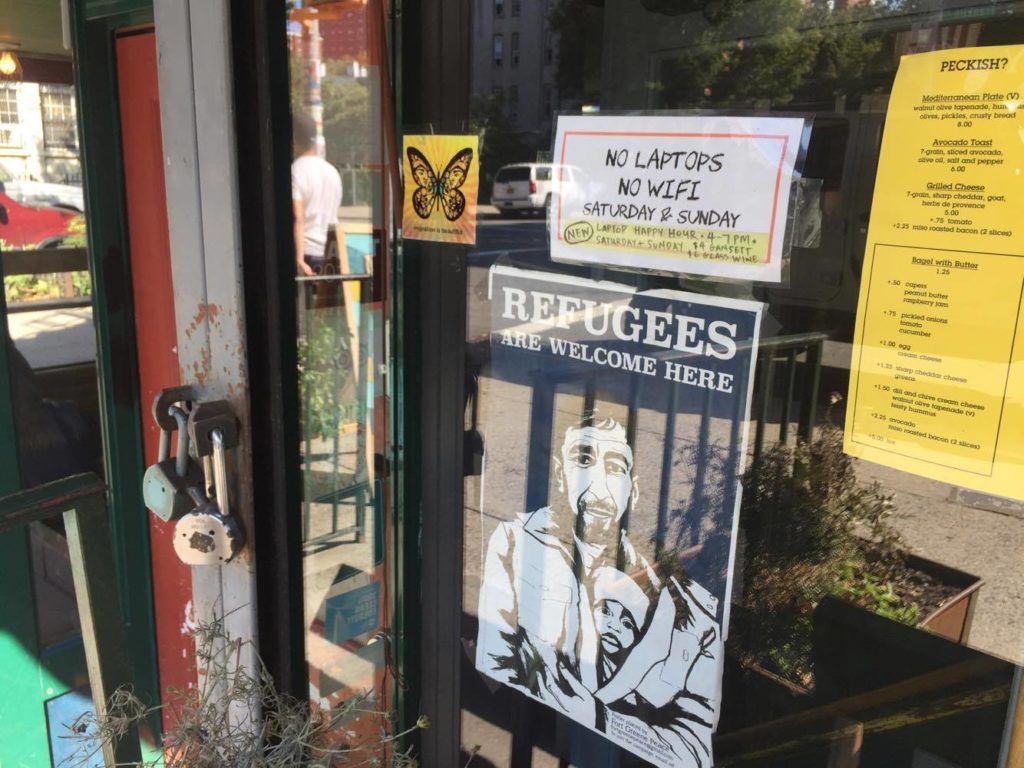 A ‘Welcome Here’ poster displayed on a storefront in Bed-Stuy.

Some new posters appeared on storefronts across Fort Greene, Clinton Hill, and Bed-Stuy earlier this week. These posters weren’t trying to sell a product but rather an ideology. “Refugees and immigrants are welcome here,” they read. This recent batch of ‘Welcome Here’ posters was put up in reaction to the Trump administration’s recent updates to the controversial travel ban.

However, this is certainly not the first time that the posters have been seen around Brooklyn. Fort Greene Peace (FGP), a community group that works in these three neighborhoods, have been putting up versions of the image since February last year. “We see this as important because it connects many peace and social justice issues,” says Ed Goldman of FGP.

Goldman estimates that over 200 posters have been put up around the neighborhood to show solidarity.

Businesses in the neighborhood have been supportive of the campaign. Many storefronts still display now-faded posters that were put up last year. “Virtually no businesses have refused because they disagreed with the sentiment of the poster,” Goldman says. “Some have said they don’t hang posters. [Or] many go up and then are taken down as windows get cleaned or they get frayed,” he adds.

The posters were originally created by Bay Area-based artist Micah Bazant for an organization called Jewish Voices for Peace. The artist made the image available for free download online for non-commercial use. They have since spread nationwide including many popping up aacross New York City.

Some may question who these posters are really being targeted towards. Between Oct. 1, 2015 and Sept. 30, 2016, over 5,028 refugees resettled in New York State, as per Office of Temporary and Disability Assistance (OTDA) data. Only 283 resettled in all of New York City and Long Island in Federal Fiscal Year 2016, the OTDA data further indicates.

“The signs are in English,” Reverend Robert Vitaglione, a member of FGP points out, “many refugees and immigrants cannot read them.”

The posters are more about the community lending its support rather than inviting refugees and immigrants to stores, FGP members suggest.

Everyday distractions may also keep people from seeing the signs. “People don’t notice much anyway; they’re usually on their phones,” says Madeline McGarrity, who works at one of the shops displaying the sign.

But given recent developments to the immigration policies the importance of the sign is clear to some.

“It’s crazy what’s happening in the country,” says New York-born George Elitz, some of whose family is of Cuban and Israeli origin. He is happy to have the English-language sign on the display window of the store he works at. “If there was a universal symbol to say, ‘You’re welcome here’ we would put that up,” he says. “It used to be the [U.S.] flag, but that’s not the case anymore.”