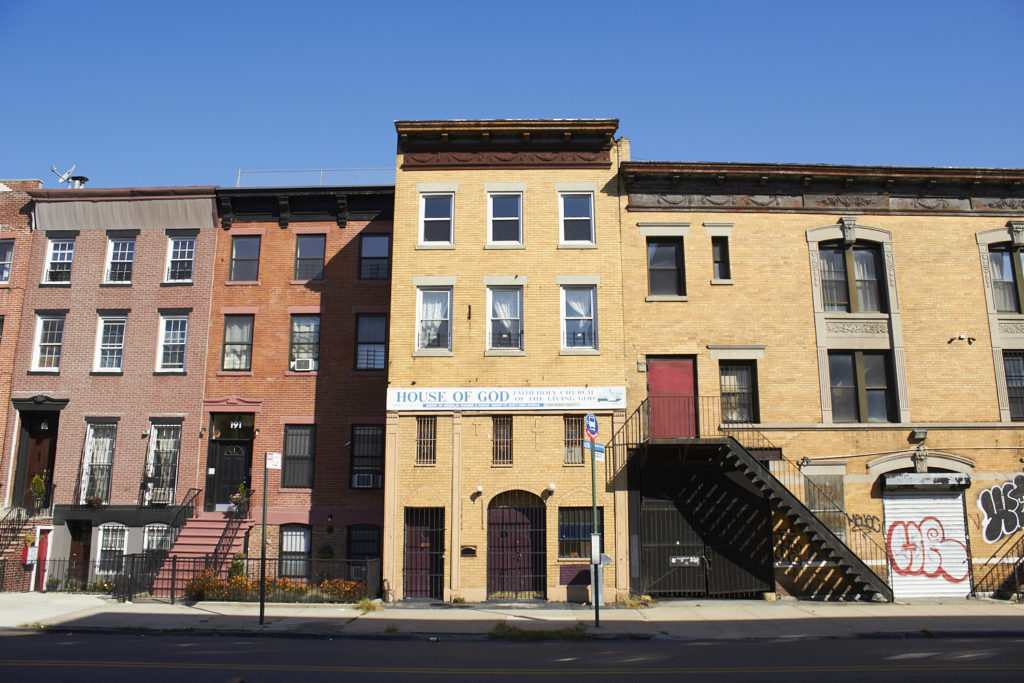 Music spilled onto Herkimer street from the Friendship Baptist Church in Bedford-Stuyvesant Sunday morning.  The church’s stained glass windows were open allowing a balmy breeze to float across the cathedral and flutter glitter-covered crosses that were suspended from the mezzanine with fishing line. But the mezzanine was empty. Just over 100 people sat scattered across pews in a church that could have held more than five hundred people.

Bed-Stuy is changing. Though neighborhood growth has outpaced the New York average, one population is on the decline. In 2000 Blacks accounted for 69 percent of the population, but in 2016 that number had dropped to just 49 percent, according to U.S. Census data. A number of local businesses have shut down and been replaced in the process. But local churches, Bed-Stuy is home to 77 of them, are doing everything they can to hold onto their congregations.

“We’re seeing across the board declining attendance,” said Father Kingsley of St. Martin de Porres Parish. In 2007 the parish was formed after the Diocese decided to merge 3 Catholic churches in the neighborhood: Our Lady of Victory, St. Peter Claver, and Holy Rosary. Though all three churches have retained their physical locations, costs and staff could be reduced to account for diminishing attendance.

“About 5-6 years ago, they had a lot more people come [to church],” said Stanley Dorville an usher at Our Lady of Victory on Throop Ave. “A lot of people moved out, but the new people, they don’t know about the church yet.” As a number of black residents in Bed-Stuy have moved out in pursuit of affordable rent, church attendance has gone with them. According to a Pew Study, 83 percent of blacks say they go to church at least a few times a year. Yet the most rapidly growing population in the neighborhood, whites, only 66 percent say they attend church.

The average rent in Bed-Stuy has increased by 36 percent in the last 25 years according to a study from NYU’s Furman Center. Individuals that have lived in Bed-Stuy for years are finding that they cannot afford the neighborhood any longer. “We have a large membership of older members,” said Daisy Wilder Executive Secretary for Beulah Church of God on Marcy Ave. “A lot of them have moved outside of Bed-Stuy into senior living facilities and affordable housing because of the rent. Our older members have become pros at scheduling Access-A-Ride to drop them off for church.”

A few churches in the area are doing what they can to keep attendance high, despite the changing neighborhood. “We get a lot of visitors,” said Reverend Sheila Glenn of Friendship Baptist Church. With the increase in use of home-sharing sites like Airbnb, Bed-Stuy has seen a dramatic increase in tourism. According to the Share Better Coalition, Bed-Stuy and Crown Heights are home to 4,842 Airbnb listings between the two neighborhoods. Glenn and the other staff have worked to build a community that invites vacationers to attend services and hold frequent fundraising drives to cover church upkeep. “A lot of churches have sold and rented the air rights above them,” Glenn said. “We want to stay the course.” Right now, the church needs millions to install handicap accessible ramps and a new sprinkler system to meet city codes, but Glenn is hopeful.

Funding is an unresolved issue for many churches in Bed-Stuy that rely solely on tithing to cover the cost of operations and upkeep. Church congregations continue to tithe, but fundraising within the surrounding community has slowed to a trickle. “We had people that would stop by and just give a donation, but those people are being priced out of the neighborhood,” said Michael Evans, Sr. Pastor of Faith Holy Church of the Living God on Putnam Ave. “And the new people in the community don’t do that.  That’s a major difference — a major difference.”

While churches are losing one revenue source, many developers have begun to make offers to purchase church property. “I had to beat them off with a stick,” said Wilder.  Her experience is a common one in the neighborhood. Many of Bed-Stuy’s churches own a considerable amount of property, and with the rapid increase in rental prices, many developers have tried to broker deals to buy-out churches. “Developers have come by and offered cash money for the church buildings.  And obviously our answer is a firm and categorical ‘no,”’ said Father Kingsley.  “There’s still a vibrant and living faith community here, so no, we’re not selling.