Attention attached to homelessness by community activists in Forest Hills, Queens has made long-standing frictions resurface.

It is just a snapshot of the city that witnessed the number of homeless people living on the streets surge by 39 percent to 3,892 this year, according to statistics of the Homeless Outreach Population Estimate in February.

“Everyone has the right to have a home,” said Felder, who is also a labor lawyer.

The member of Queens Community Board 6 brought the issue to the floor at the community board meeting on September 14, pointing out that harassment and violence by the homeless people should not be overlooked.

However, violence can go both ways. In December of 2016, a 40-year-old homeless man pushed a 54-year-old woman down a flight of stairs at the Forest Hills subway station, resulting in elbow and spine fractures. The problem has caused fear in some residents.

“It’s pretty scary … when I saw them yelling and screaming,” said Brian Spaulding who moved to this neighborhood in 1966. He added that if people simply feel threatened by the homeless without knowing whether they have weapons, police may not come, which aggravates pedestrians’ fear. 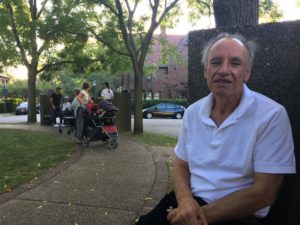 Brian Spaulding sits on a bench in the Forest Hills Garden

Difference on how to solve the problem has once again arisen after the community board rejected Mayor Bill de Blasio’s zoning change plans in 2015 – “Mandatory Inclusionary Housing” and “Zoning for Quality and Affordability,” which aim to create and preserve 200,000 affordable homes.

While Felder suggested affordable housing – based on the neighborhood median income instead of New York city’s Area Median Income – be a solution to ease the crisis, Spaulding expressed concerns if homeless people live in this neighborhood, such as crimes and depreciation of house values.

“Picture this. The homeless are here and walk around, and you want to sell your house,” Spaulding explained, “[the buyers] may not purchase your house.”

“There’s a strong vocal contingent that [thinks they know] what’s best for the community and push back against any sort of effort to change things in any way,” Felder said. “Keeping Forest Hills great is their mentality.”

Echoing Felder, community activist Peter Beadle recalled how the mayor’s two proposals once divided the neighborhood in November 2015. “I was disappointed that one of the community board member voting against mayor’s two proposals stated he did not want ‘those people dumbing down Forest Hills,’” Beadle said on Friday, without referring to the member’s name.

Frank P. Gulluscio, district manager of Queens Community Board 6, confirmed on Friday that there has been no affordable housing in Forest Hills so far. Karen Koslowitz, city council member for District 29 that includes Forest Hills and Rego Park, could not be reached for comment on Thursday and Friday because of the Jewish New Year.

“I’m sure every neighborhood has the same feeling [that they do not want the homeless as their neighbors,]” Spaulding said.

Indeed, this time last year residents in neighboring Maspeth, Queens protested against Mayor Bill de Blasio’s plan to provide shelters to some homeless families in a Holiday Inn in the neighborhood, shining a spotlight of media attention on the frictions between residents and people who are homeless.

Felder, therefore, hopes that calling for public attention is the first step to better approach the issue.