Live From A Shipping Container

Somewhere in Bushwick, Sheri Barclay is inviting a stranger to host a show on KPISS, her local independent radio station airing on the internet from a tiny shipping container in a place called Punk Alley. Barclay estimates that only 15-20,000 people know about the alley, so even fewer people know about KPISS, unless they live in Bushwick.

From an obscure place under the elevated JMZ train tracks, KPISS is engendering connections that may not have existed otherwise. Since its nascence in 2015, the station has grown to host 70 shows by a total of 140 DJs over time. On kpiss.fm, shows are archived and when live, a digital chatroom, averaging 10 people, facilitates conversation between listeners and the DJ.

“People [I meet through KPISS] turn into my friends,” says Barclay. 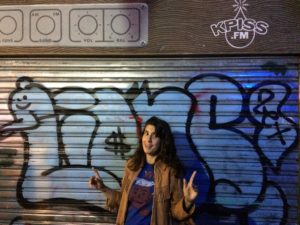 Sheri Barclay, founder of KPISS FM, stands outside the radio studio in Bushwick.

Bushwick’s local radio stations are serving communities on a smaller scale by disclosing unconventional stories and sounds. While some, like KPISS, focus on underground music, others like Heritage Radio discuss issues specific to the neighborhood. Hidden behind one of Brooklyn’s famous pizza parlors, Roberta’s, Heritage Radio hosts shows on food policy, cultural appropriation and gentrification.

KPISS is not just a radio station, it’s a Do-It-Yourself project. Lined with pink walls and adorned with trinkets galore – from an escaped mental patient barbie doll hiding in a plant to a 3D picture of poodles – KPISS was built by Barclay and the people she has met along the way. The KPISS engraved wooden box which encases radio equipment was crafted by her neighbor; the desk, by an acquaintance at Home Depot, and the rest by Barclay and friends.

KPISS’s shows are completely freeform and only require that the host pay $35 a month to use the studio which competes with other local stations like Radio Free Brooklyn and Heritage Radio to name a few. The content of these radio stations is more serious than Barclay’s creation, which departs from traditional local radio. KPISS is an alternative place to experiment and play, oozing 70s mentality.

“KPISS’s silly [vibe] is like dad jokes mixed with acid,” says Barclay about the station’s culture.

The station’s avant-garde personality lives in its programming. Yum Cha is a hip-hop-heavy show hosted by two Asian Americans who met while working at a Dim Sum restaurant whereas Swell Season is hosted by a passionate year-round city surfer.

A Spotify engineer from nine to five, host Thor Kell, 35, discovered KPISS through a friend who had his own show. “I was looking for a place to DJ that was not recording sets in my living room and it’s nice to have the alleyway as a bit of Weird New York,” he says.

By day, some hosts work at Comedy Central, Etsy, Instagram and GIPHY. Barclay, who has worked a number of odd jobs in the past year, is markedly devoted to growing KPISS’s listenership as well. Last August, she held the station’s second anniversary for which she booked rock band, Fletcher C Johnson and a local Puerto Rican salsa band that rehearses down the block. Bizarre awards were jokingly given to programs like punk show Torture Chamber and fresh music show, Best Deli Radio.

Everyone is welcome at KPISS and the people involved matter the most to Barclay. Each time she visits Milly’s, a nearby pizza place, she’s humbled by the people that greet her. They remind her of KPISS’s beginnings when the station took temporary shelter at Milly’s while the shipping container was renovated.

Encouraging local dwellers of all backgrounds to spread the word, Barclay hopes to someday grow beyond her core audience to listeners in other states. But for now, she continues to seek out potential collaborators, hipsters aside – and even though she fears that some will retire their DJ spot sooner rather than later, she believes “someone cool is just around the corner.”

Rebecca Blandón is a native New Yorker driven by curiosity and compassion in her reporting. She has an affinity for stories on music, food studies, visual art, human rights, urban life, pop science, and identity politics.
View all posts by Rebecca Blandon →