Every Sunday morning the New Brown Memorial Baptist Church in Red Hook, Brooklyn, is filled with the joyful sound of gospel hymns. Among the church-goers, Saadia Austin, 35, who has lived in the neighborhood her whole life, always has a fear for her life in the back of her mind.

“It was the longest night ever,” said Austin, member of the courtesy ministry, of the night the neighborhood was slammed by Superstorm Sandy in October 2012. Red Hook Houses, the largest housing project in Brooklyn and home to over 6000 people, including Austin, was left without power and water for more than two weeks.

“We saw what a mighty force water can be and the same thing could happen again,” she said. “I have to try not to think about my fear in order to get my work done every day.”

There have been certain changes in the neighborhood since Sandy but not nearly enough to ease the fears of local residents like Austin. The New York City Housing Authority just started to replace the damaged roofs on the 28 residential buildings the second week of September. The Disaster Recovery reports from NYCHA on Red Hook Houses have remained exactly the same for the past two years, other than the estimated construction start date, which has shifted from “Quarter 3 2016” to “Quarter 3 2017”. 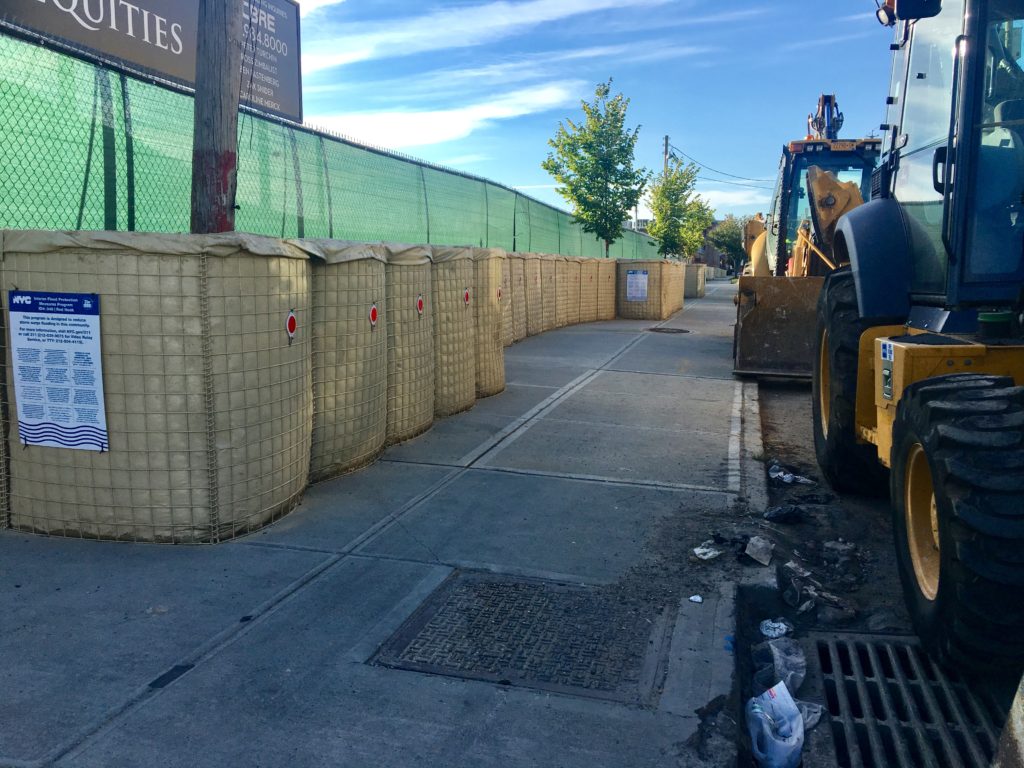 A four-foot surge protector wall was installed along Beard Street, which is by the waterfront, at the end of August 2017. Though unable to withstand a Sandy-scale hurricane, the temporary wall will provide protection against mild storm surges for another five years as the city keeps trying to come up with its permanent plan-the Integrated Flood Protection System Project-which is proposed to combine permanent walls, deployable gates and street elevations to protect against coastal flooding.

The IFPS Project, started in 2015, is an important part of Mayor Bill de Blasio’s $20 billion resiliency plan for the city. And yet the latest report from the Mayor’s Office of Recovery and Resiliency shows that the project is still in the conceptual stage, pending approval.

“We are just as vulnerable to flooding as we were 5 years ago,” said Austin. “I expect the officials to fix the situation but I also know they’d take a long time. One thing I know about the government is that they always drag their feet in red tape.”

Residents’ complaints are not unheard by the authorities, quite the opposite. “The frustration among the residents is absolutely understandable but capital projects of such scale always take years. This is the expectation,” said David Estrada, Communications Director of the office of City Council Member Carlos Menchaca. Having won the New York City 2017 primary election, Menchaca is on his way to a second term in District 38, which includes Red Hook, Sunset Park, and Windsor Terrace.

When capital projects like protection infrastructure installment take place it affects different stakeholders, the federal government, the state, the city and private owners and there’re different jurisdiction processes controlling each type of property. “It takes years to negotiate,” added Estrada. “And it’s always a battle to get funds.”

According to the Mayor’s Office of Recovery and Resiliency, a total of $100 million will be used for environmental review, permitting, design, engineering, and construction to complete the IFPS project. Half of the funding is supposed to come from the Federal Emergency Management Agency (FEMA). However, the Trump administration’s proclamation on cutting funds to FEMA, as shown in the 2018 “Budget Blueprint to Make America Great Again” from the Executive Office of the President, has made it uncertain when or if the fund would ever arrive.

“They’re likely to do great harm, not just the FEMA, the Environmental Protection Agency and Department of Housing and Urban Development could all affect the recovery and resiliency project if they cut or relocate their funds,” said Estrada. “The state and federal government sometimes promise more than they actually deliver, or they deliver slower.”

Recovery from severe natural disasters requires cooperation among different departments of different hierarchies. It is the residents in the affected areas, however, who are feeling left behind by New York, at state with a $1.5 billion GDP making it the third largest economy in the country.  “When Sandy happened I felt like we’re in a third-world country,” said Austin. “While we are actually part of New York, the Big Apple.”

The native New Yorker added: “I do want to move to another place in the future, where I’m not in constant risk.”