Taste of China, made in the USA

There is a question posted on “Quora”, an online platform for sharing knowledge through Q&As, asking, “Where is the best place to buy mooncake in New York City?” The top answer writes, “Flushing, Queens is now the center of all things Chinese…Of course, you want to stick to bakeries which are Chinese.”

With the approaching of the traditional Chinese Mid-Autumn Festival, mooncakes, the typical food for this festival, have been put on the most eye-catching racks of every supermarket and bakery in Flushing.

“Hong Kong mooncakes!” “Macao mooncakes!” “Taiwan mooncakes!” saleswomen call out repeatedly at the Flushing New World Mall. Customers can find the most famous Chinese mooncake brands such as Maxims and ShengKee, with prices ranging from $19.99 to over $50 each box. The prices are similar to those back in China, and the packages look just like the traditional ones, yet these mooncakes are all made in the USA. 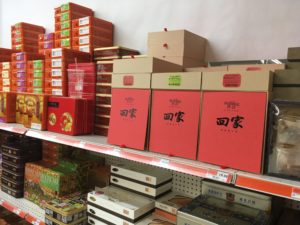 Mooncake boxes with words “go home” on them, at Flushing New World Mall. Photo by Jiangxin

The saleswoman explained that they didn’t import mooncakes because mooncakes couldn’t be reserved for long. There is another more essential reason: China is not eligible to export meat or egg products, including salted egg yolk, the most popular fillings of mooncakes, to the United States, according to the US Food Safety and Inspection Bureau of the Department of Agriculture.

Nevertheless, Chinese bakeries have their way to remain as traditional as possible.

On Yelp, Yeh’s Bakery ranks the highest and owns the most reviews among bakeries in Flushing. In the around 170 square feet storefront, four workers are busy answering phone calls, working at the checking counter, and introducing products to new customers. Bakers put out newly baked cakes about every ten minutes. This is their “craziest” month of the whole year, the month before Mid-Autumn Festival, said employees.

According to employee Yuting Cao, besides individual customers, large companies such as the World Journal, order hundreds of boxes of mooncakes every year. They began preparing for the festival three weeks ago, opening from 7 a.m. to 7 p.m., 7 days a week, with bakers start working from 3 a.m. every day.

Different from other bakeries that crowded around the most populous Flushing Main Street Station, Yeh’s is located a 20-minutes-walk away. It opened there thirty years ago.

Mrs. Xie, a citizen in Flushing who came from Hong Kong, takes two buses to get to Yeh’s and buys two boxes of mooncakes as gifts for friends. She doesn’t consider herself the most loyal customer because “some customers take two hours to come here to buy mooncakes,” according to a saleswoman. 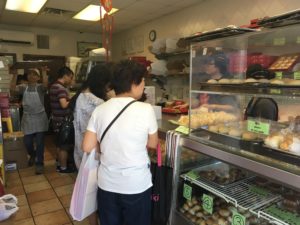 Customers waiting at Yeh’s Bakery, and a baker taking out newly baked mooncakes. Photo by Jiangxin

According to Yuting Cao, their mooncakes are not very sweet so does not quite appeal to American customers. But when asked if there were any plans to modify the flavor to broaden the customer base beyond Chinese customers, the answer was a firm No. Almost all bakers there are from Taiwan. “我们一直保持传统的味道。 (We always stick to the traditional Taiwan flavor.)”

It’s more than 6,000 miles between Flushing and China, yet at this time of the year, a box of home-flavored mooncakes, no matter if made in China or made in the USA, makes people feel close to home.