Profits, Taxes and worries: meet the vendors of the Bronx

The Bronx: Everyday, by 6 in the morning, Ercan Kamil Ulger, originally from Turkey, sets his licensed fruit stall along 170th street and Jerome Avenue in the Bronx. He works at the stall untill 8 in the evening. This is the business by which he pays taxes and sustains a life in America.

“This business was started 16 years ago by my friend and I joined him about a year ago,” said Ulger, weighting strawberries as the customer stood by. “Today, in one hour I had about 15 customers because on the last day of the month people buy more but generally a little less than this,” he added. 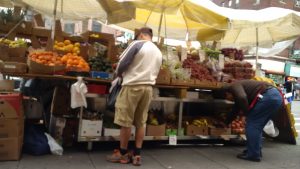 Street vending businesses such as this one have long played an important role in the area’s economy and sustainability despite the fact that the City Council has limited the permits to 3000 food vendors and 853 general vendors. Those limits have not budged since 1981.

Vendors pay federal taxes as well as sales tax for the items they buy from the wholesalers. They also pay for the general vendor license fee that is required to be renewed each year costing $100 to $200 depending on the time of the year the application is submitted. A 2015 study titled ‘Upwardly Mobile’ released by the charity group ‘Institute of justice’ found that New York’s vendors contributed almost $293 million to the city’s economy and generated an estimated $71.2 million in local, state and federal taxes.

Apart from financial and employment benefits to the individual sellers the stalls also provide an alternative buying option in terms of price and variety to a large number of the residents.

“These are good fruits and their fruit is better than store fruit, its cheaper and easy to buy,” said Janice Martien, a regular customer at the fruit stall.

A few steps from here is a stall similar in size with mobile phone covers, watches and headphones on the display. “I have been here almost 40 years now and I know how much the rents have gone up. Some big shops are closing because of the high rents,” said Thomas Brown pointing towards a closed shutter in the opposite direction across the street. How much the vendors pay for the space is also determined by the stall location “The stalls that are here beside the street and away from the walls do not have to pay extra money to the building and property owners. The business seems good enough, with the earning, people are able to support their family and pay bills,” added Brown.

As the vendors on Jerome Avenue work hard to keep their stalls going they are worried by future changes that may hinder their business. Recently, the Department of City Planning (DCP) as part of the Mayor’s affordable housing plan to promote residential and commercial sectors has bought forward a rezoning strategy for the 73-block stretch of Jerome Avenue under which structural changes to the location is expected.

“What will happen to small businesses like this if the government is always concentrated on developing commercial buildings,” said Kenneth Shoy. “We also need jobs and how will we manage if the land is privatized and the rents for space become more expensive”.