Hip-Hop today, root to uprooted in The Bronx

BRONX: In 2007, 1520 Sedgwick Avenue located in the Morris Heights section of the Bronx was officially recognized by the New York State office of Parks, Recreation and Historic Preservation as the birth place of Hip-Hop. It was here that Clive Campbell aka DJ Kool Herc helmed over the popular birthday party that became the reference point for the birth of Hip-Hop.

Hip-Hop production and recruitments shifted to other boroughs in later years, especially in Manhattan, Harlem provided better opportunities for the emerging artists with many places to perform at and the role the Bronx played in nurturing the culture reduced over time.

“I remember the clothes we used to wear, Hip-Hop was all about style, attitude and real talents. In that sense we were the true bad boys,” said Jabir Davis in his late 40s now, born before 1973, the year when DJ Kool Herc’s birthday party marking his and the building’s name in the history of Hip-Hop. “Today Hip-Hop is not what it used to be and it lacks the cultural essence that makes it what it is.” 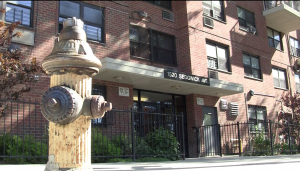 A view of1520 Sedgwick Avenue, landmarked to be the birth place of Hip-Hop. (Tsering Wangmo).

In the 70s and 80s it was block parties in the Bronx where DJs established themselves amongst the local population. Hip Hop as a sub cultural movement was not only limited to DJing but also to B-Boying, Rapping, and Graffiti Art. “I was raised here in these streets,” said Davis, gazing at the long never ending stretch of the Avenue. “Artists used to sample and make their cassettes right on the streets to sell it right there. It was all street credibility but once Hip-Hop became commercialized it stopped being what it was and I began loosing interest in the new releases.”
Hip-Hop got its name in the 1970s, but the term was made popular by Steven Hager’s article in the Village Voice titled “Afrika Bambaataa’s Hip-Hop”. In the Bronx, inspiration for the genre dates back to the time when the music was not even labelled.

“We are talking about 50 years ago, a lot of things change. It was the free concert during the block parties that many artists were known in this area but for me Hip-Hop is black culture, the beat and the sound is inspired from African drum rhythm,” said Louis B. while listening to Jazz music on the radio.

Walking passed the 174th street apartment today, surrounded by the quiet residential area it is hard to imagine that this was once a happening place in Hip-Hop. In the park close to the building a few senior citizens were talking amongst themselves and on the next bench are three young men, all born in the early 1990s, setting up a chess board. “I think with the coming of computers and technology music has changed. Here, Hip-Hop music is played in some house parties and there really is no bar or events dedicated solely to Hip-Hop music but Hip-Hop in general has evolved to a different musical style,” said Terrell Fitzgerald, of the trio, referring to the lyrical content of the early and later songs. “I am not particularly into Hip-Hop” admitted Fitzgerald.

For those who have witnessed the success stories of artists from the Bronx and changes in Hip-Hop music, Hip-Hop’s origins remained a memory. “In the early years, Hip-Hop was positive, it was much more about unity but now, it is more about money and everything that is bad is glorified, a negative representation of the culture. Hip-Hop has lost the real culture,” said Rickiey Sosa, a former break dancer and a resident of the area, referring to some of the earliest artists from the Bronx such as Grand master Flash, Kool Herc, the Cold Crush Brothers and the like. “I would say that Kool Herc was an important figure, he knew how to bring people together but I mean, he was not the only forerunner in Hip-Hop”.