The underground life of Brighton Beach 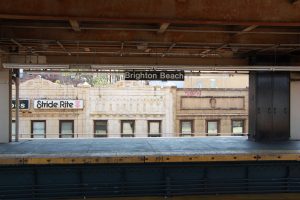 When the B train makes its last stop in Brighton Beach and the doors of the subway car open up, New York is already far away.

Home to one of the largest Russian-speaking communities, this Oceanside neighborhood located at the tip of Brooklyn has been known for decades as the Little Odessa of the East Coast. Today, however, something is changing in the bowels of Brighton Beach.

According to the U.S. Census Bureau, in the last decade the Latino community living in the area increased exponentially and today represents 14.6 percent of the neighborhood’s population or an increase of 36 percent. Forced by their lower-incomes to live in basement apartments, the Spanish speaking population is the new, hidden, heart of Little Odessa.

It’s 3pm on a drowsy Thursday in Brighton Beach, an old Mexican couple appears on the doorstep of Tacos El Rey. The woman holds in her hands a bunch of fresh-cut flowers that she arranges at the foot of the Virgin statue, in the right corner of the hall. Maria Cantharero, the owner, meets them with a sweet smile. She was one of the first to settle down here, 35 years ago, and her restaurant, at the top of Coney Island avenue, is for the Latino community a landmark on Brighton Beach’s map. “I saw this neighborhood changing over the years and even if it’s still called Little Russia, today Brighton is much more multi-cultural than what’s expected,” says Cantharero.

Today, the Latino community often represents the poorest social strata of Brighton Beach. “When they arrived in America, Russian people took advantage from the capitalist system. They were ambitious, hard-working and they did it well,” explains Pat Singer, director and founder of Brighton Beach association. “The Hispanics, instead, are still struggling to reach the quality of life they had in their own country.”

In the neighborhood the gap between these two communities is quite visible and is reflected in the geography of Brighton Beach. Far from the waterfront luxury buildings, Latin people live between Ocean Parkway and Neptune Avenue paying around $800 for a basement apartment sidewalk view.

Most of the Hispanics living here love the limitless horizon of Brighton Beach and were attracted to the neighborhood for its closeness to the ocean. Nonetheless in October 2012, when Sandy hit, they were the first victims of the Atlantic Ocean’s ruthless waters. The basement apartments that most of the community occupies flooded under almost 9 feet of water and for the first time the underground life of Brighton beach came out from the oblivion. “I remember those days,” says José Vida, whose family arrived from Mexico almost 30 years ago. “We had no food, no home and it was cold. The community helped us a lot.”

Regardless of everything, for some Brighton beach is now home. Sonia Lemus, who arrived in the United States 10 months ago from El Salvador, found here a place to rebuild her life after her elder daughter was kidnapped by some gang bangers. “When we arrived, I was scared about the language barrier but then I found out that in Brighton beach the Spanish community was growing and I was able to work in a restaurant without speaking English or…Russian!”.

Of course, Brighton Beach can’t make everyone fully comfortable. “It’s never like home,” explains Antonio, who declined to give his last name because of his illegal immigration status. He plans to “retire” from his American dream next year.

Singer, who has been running the Brighton Beach association for over 30 years, is trying to adapt her work to the new identity of the neighborhood. “They call me the mother of Brighton Beach because I help people with any sorts of problems, form food stamps to housing,” she explains. For her, it doesn’t matter if in 20 years Brighton Beach will no longer speak Russian. “When I was a kid I loved this eclectic taste of freedom that came form the sea and spread everywhere in the neighborhood. And that is what we should preserve.”