The Heat of Deep Freeze

Some people will do everything to stay beautiful and beat old age, even sitting for 3 minutes in a deep freezer.

On the outside, the fitness center CryologyLI, owned by Alexa Frisch and her brother, doesn’t look any different from other sports centers. But the heavy mist leaking out of the fitness room tells its secret: you can “freeze” yourself in lower than the lowest temperature on earth here, from -100°C to -144°C.

The practice is a therapy called whole-body-cryotherapy (WBC). Cryo is a Greek word for “cold”. WBC refers to the practice of immersing one’s whole body in the extremely cold dry air for 2-4 minutes.

It became popular first among professional athletes, as a tool to decrease muscle inflammation. In recent years, it has gradually spread to the general public because of athlete endorsements. Also, cryotherapy centers advertise that the practice has other benefits, such as improving sleep, anti-aging, and weight loss.

“The scientific research about WBC effects is just starting and is dedicated to very specific population such as elite athletes. These advertisements take shortcuts with science and these advertised benefits are very short-term and transient. We have no idea of the persistence of these effects neither the chronic effect of the use of WBC,” explained Dr. Francois Bienzen, project coordinator of French National Institute of Sport, Expertise and Performance and one of the leading experts conducting research on WBC benefits.

The lack of scientific proof hasn’t stopped WBC from gaining popularity with the public. “Even though there is no science behind it, and the FDA has not yet approved it, people see their life changing and they feel better after taking WBC,”said Frisch. Frisch, her brother and father all indulge in regular WBC sessions weekly.

In CryologyLI, Katherine Klann just took her first WBC. Klann is a reporter who suffers depression. “The experience is so unique. I feel very happy immediately, and also talkative and floating. The increase of endorphins is really so addictive, like cocaine. It totally exceeds my expectation,” said Klann. She made her trip to the center the second day after seeing an athlete endorsement of WBC on TV.

Anthony Libroia, (21), a young basketball player, has been doing the WBC for a month in CryologyLI. “As an athlete, pain relief and recovery is very important. I have tried various ways to relieve pains on my knees and back, but it comes back after several hours. But with this cryotherapy, the pain never comes back,” explained Libroia who has a monthly package.

WBC has a nickname “legal dose”, which refers to the fact that people can become easily addicted to it. When individuals go into the cold chamber, the nerve system is activated and blood vessels constrict. It can help reduce inflammation by pulling the blood back into the body’s core. At the same time, the endorphins and opioids will be released so people feel euphoria.

“WBC is popular also because it’s really for everyone. Basically everyone older than 14 years old can do that,” explained Frisch, who has clients aged from 25-75.

The first WBC chamber was built in Japan in 1978 for relieving pain for patients with rheumatoid arthritis. The technology was spread to Europe in the 1980s. However, the therapy did not come to the US until 2008.

“We are going to open four new shops around New York in the coming four months,” said Joanna Fryben over the phone, the owner of Kryolife, the first WBC center in the New York City. Fryben opened beta-Kryolife in 2012, and now her shop has 95 clients per day, half athletes, half general public.

The recent WBC mania is not only reflected in the retail sector but also in the sales from WBC equipment manufacturers.

“Between 2008 and 2014, there were only 110-120 WBC units sold in the US. But last year, our company alone has sold that amount of units all over the US. Every week there is a new WBC center open in the US,” said Richard Otto, the president of Impact Cryotherapy, one of the largest WBC manufacturers in the US. Impact was newly established in 2014.

Although a liquid nitrogen WBC unit costs $50,000, the large influx of clients, low maintenance and liquid nitrogen fee can help recover the cost normally in only 4-5 months. New centers such as CryologyLI can have 20-30 clients per day, and older center such as Kryolife can have 95. The price of each session of 3 minutes is $65-95. A tank of liquid nitrogen costs only $80 can be used for 15-25 sessions. And both Kryolife and CryologyLI have only one unit in their centers so far, enough to serve a big amount of clients.

Currently, there are two major types of WBC equipments in the market. The more common one uses liquid nitrogen to cool off the chamber, while the other one uses electricity. Both sides have raised doubt on each other’s safety or effectiveness.

“Liquid nitrogen equipment is a knock off equipment with no clinical support and unsafe. And inhalation of large quantity of liquid nitrogen vapor can be potentially lethal,” criticized Kevin Kramer, owner of US Crytherapy, the first and only manufacturer in the US offering WBC electronic walk-in chamber. “All of the clinical study work, every single study on the National Institute of Health, has been done in our equipment,” added Kramer. 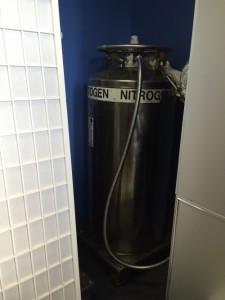 But Fryben from Kryolife can’t accept the criticism. Kryolife imports all their liquid nitrogen equipment from Poland, because “there are not yet good equipment in the US. That’s why we choose to import the European certified equipment. We only use liquid nitrogen to cool off the unit and the air inside chamber is not nitrogen. What US Cryotherapy claims is just a marketing tool”. Fryben also emphasized the high cost ($250,000-500,000/system) and relatively weak cooling effects of electric air-cooling WBC equipment are the main reasons that they don’t choose it.

Although the market is still young, WBC’s popularity continues to grow.

“My message is it is ok that you can use WBC, but be sure to have it done the right [way] with other recovery therapies before going in the cold chamber,” advises Dr. Bienzen.

And in Frisch’s icy blue colored center, athlete Libroia came out of his regular WBC session, felt energized, and smiled, “It’s really scaring that it works so well.”