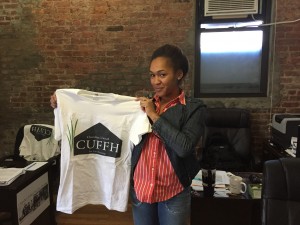 Housing advocate, Stephanie Cancel, in her office for Churches Unite for Fair Housing.

It’s a fact: there is a shortage of affordable housing in America. It’s also a fact that “affordable” means different things to different people.

The U.S. Department of Housing and Urban Development (HUD) determines the area median income (AMI) for all regions across the country. This number is the midpoint household gross income of a metropolitan area. It serves as the basis for what is deemed affordable for renters and who gets to benefit from housing subsidy programs. For 2015, New York City’s AMI is $86,300 for a family of four. The problem with this number, housing advocates say, is that it is causing New York City’s lowest income earners to be overlooked by the very programs they need to attain affordable housing.

According to the National Low Income Housing Coalition (NLIHC), a New Yorker earning minimum wage would need to work 98 hours a week in order to be able to afford a one-bedroom apartment at Fair Market Rent ($1,111). The minimum wage is currently $8.75 an hour and even with the recent push to increase minimum wage to $15.00 an hour that additional income still wouldn’t make housing affordable to the lowest earners who would need to earn at least $22.21 an hour.

Lifelong Bushwick resident, Stephanie Cancel, 23, grew up witnessing the unfair housing treatment that low income earners received. Her mom worked as a housekeeper and, as a single parent, provided a comfortable life for them both. At that time they were living in a rent-stabilized, three-bedroom apartment for $600 per month. That changed when her landlord sold the building and was replaced by one whose goal was to either get more money from the existing tenants or replace them with ones who could pay more. It was then that Cancel experienced what she now knows to be harassment tactics that landlords use to ensure they get their asking price.

“We went without heat; we went without hot water. We had mice; we had roaches. They weren’t sending extermination. They knew that would ultimately force us out. We lived like that for about six years until he offered us a few thousand dollars to move out,” she said.

Cancel and her mom got a section 8 voucher and moved to another Bushwick apartment that was rent-stabilized, however, it was a one-bedroom for $1,300 per month: a much smaller space at a much higher price. That experience fueled Cancel to make a difference. She is now a staff member for Churches United for Fair Housing (CUFFH), a grassroots organization that provides affordable housing information to low- and extremely low income earners.

According to the NYU Furman Center, Bedford Stuyvesant and Bushwick had median household incomes of $37,011 and $38,780, respectively, in 2013 while the AMI for New York City was $63,000. When the AMI is determined for New York City, Rockland and Westchester county median incomes are included which were $104,200 and $105,400 respectively thereby misrepresenting what is actually affordable by the majority of residents in the area being measured.

HUD Public Affairs Specialist, Charles McNally, stands behind the AMI methodology noting that regardless of affordability, demand for housing is much higher than what’s available. “Eliminating higher income areas would lower the AMI, but that probably wouldn’t change the reality that demand for subsidized housing vastly outstrips supply,” he said.

Mayor Bill de Blasio’s Five-Borough, Ten-Year Plan highlights the affordability disparity, noting that the existing affordable housing programs mostly benefit residents who earn 50-60 percent of the AMI, which in 2013 was $31,500 to $37,800 for a family of four, leaving out the likes of minimum wage workers who make well below the median income. The 50 percent minimum and 60 maximum is a general standard set by the HUD-created Low-Income Housing Tax Credit which is a financial tool that promises investors dollar-for-dollar tax credit to build affordable housing.

In his plan, de Blasio suggests widening the range of residents included in affordable benefits by providing deeper subsidies for extremely low income earners (households earning 30 percent of the AMI) and cross subsidize that population with mixed-income housing programs that target households earning up to 165 percent of the AMI.
There are some affordable housing advocates who have their doubts about the mayor’s plan because introducing higher income earners into poor communities may lead to an appeasing of the high-wage earners to ensure they stay and continue paying the high rents.

Cancel says that the impact of gentrification on affordability is taking its toll on long-term residents: “Now we’re uncomfortable in our own space because we were expecting to see change that would benefit us but these new developments don’t help us.” She continued, “now you’re seeing brand new organic markets and things of that nature but we can barely afford housing so how can we afford Starbucks?”

She also charges that developers make promises that they’re going to include affordable housing in the new buildings as well as fund schools and community centers but often don’t come through on those promises. Case in point, when in 2014 Read Properties bought the abandoned Rheingold Brewery site in a multi-million dollar deal to build high-rises, promising to include affordable housing in their plans. However, according to City Limits, Read sold off the site to two new developers: Joel Goldman who, as of September 30th, would not take the community’s affordable housing coalition’s calls and the other, Simon Dushinsky’s Rabsky Group, who refuses to put the promise of affordable housing, specifications or otherwise, in writing.

For advocates, it seems the issue of affordability isn’t going anywhere any time soon. That, coupled with an unwillingness to include more affordable units in new developments, is leaving a number of New Yorkers who need affordable housing in the cold. This inspires advocates like Cancel to keep working at what they do.

“We fight,” she said. “We just continue to fight and keep [the community] informed of what’s going on.”