Yuqiao Cen, a graduate engineering student at NYU, makes sure to shower before 10pm every night, otherwise she is criticized for making too much noise in her apartment. She lives with her landlord and his family of five in a 3-bedroom apartment on 11th Avenue in Brooklyn.

Similar to Cen, Yanjun Wu, a newly admitted graduate student at Fordham University, barely stays in his living room because she feels uneasy wearing pajamas while her male roommates are around. She lives with  4 roommates in a 4-bedroom apartment on the Upper West Side.

Cen and Wu are not the only ones forced to share an apartment. Many of their classmates and friends living in New York are also doing the same thing. In fact, a recent study conducted by the New York City Comptroller Office suggested that NYC has become much more crowded in the past 10 years with the crowding rate being more than two and a half times the national average.

The study “Hidden Households” was conducted by Scott Stringer, New York City Comptroller, highlighting the growing crowding rate in housing in NYC. According to the study, New York City’s crowding rate has rose from 7.6 percent in 2005 to 8.8 percent in 2013. The number of crowded housing units grew from 228,925 in 2005 to 272,533 in 2013, representing an increase of 19 percent.

The increase in the crowding rate is city-wide. The Comptroller’s study indicates that the proportion of crowded dwelling units increased in all of the five boroughs except Staten Island during this time period. Brooklyn has the largest increase with 28.1 percent, Queens has 12.5 percent and 12.3 percent in the Bronx.

Brooklyn has the largest number and the largest increase in crowded dwelling units among the five boroughs (source: NYC Comptroller’s Office)

What defines a crowded unit? According to “Hidden Household”, the New York City Department of housing Preservation and Development (HPD) uses a persons-per-room (PPR) standard to measure crowding within the City’s housing types. Dwelling units occupied by more than one persons per room are defined as “crowded”, and more than one and a half persons per room is classified as “severely crowded”.

The family that Cen lives with consists of a young Chinese couple with two small kids – ages 2 and 4, and a grandmother. She found the apartment through her cousin. Cen pays only $500 and she even gives the landlord $200 more a month, so that she won’t have to cook after class. “It is an advantage to live with a family, [in] that you don’t have to worry about what you have to cook everyday,” said Cen. “But that is the disadvantage as well, you can’t choose what you want to eat.”

Living with a big family sometimes gives Cen a sense of crowding and restraint. Even when she is under deadline at school she still needs to look after her landlord’s kids if they ask her for help. And she cannot invite friends to stay with her overnight, because the couple worry that it may cause danger.

“Fundamentally, this is a story about supply and demand,” said David Reiss, professor of Law in Brooklyn Law School, and research director of Center for Urban Business Entrepreneurship. “The increase of the housing supply has been very slow, while the increase of the population was very fast, and that is the recipe for crowding. Because people can’t afford to live where they want to live, their choices would be continuing to live where they want to live and be crowded, or to switch to location with more space for your dollar.”

The data confirm Reiss’s observation. According to the U.S. Census Bureau, NYC’s population in 2013 was 8.43 million, increasing from t8.2 million in 2005. However, the 2014 Housing Supply Report, conducted by New York City Rent Guidelines Board, also indicates that the number of permits issued for new construction of residential units had reached its peak – 34,000 in 2008, but the number decreased greatly to 6,000 in 2009. Although the number kept gradually going up, and reached to 18,000 in 2013, the market is no longer as hot as before the financial crisis of 2008.

In the beginning of apartment hunting, Wu and her roommates wanted to rent a five-bedroom apartment so that everyone could have their own private space. “The market is too busy in New York,” said Wu. “Once we were going to pay the [lease] for an apartment on Roosevelt Island, but someone was ahead of us by just a few minutes.”

After weeks of apartment hunting, Wu and her roommates decided to make a compromise – two of them would have to share a bedroom, in order to get a decent apartment at an acceptable price – $4,900 per month, with neither an elevator nor a laundry room.

“Land is very expensive, and there is not much left for residential development but a tremendous number of people want to live in New York,” said Albert Goldson, Executive Director of Indo-Brazilian Associates LLC, A NYC-based global advisory firm. “Real estate prices started to go up, so you have people who are middle class or who have modest salaries who can no longer afford [to pay a] mortgage. And what many of them would have done, either single people or a family, was ‘double up’. Like single people who bring in a roommate, now have several roommates in a unit.” 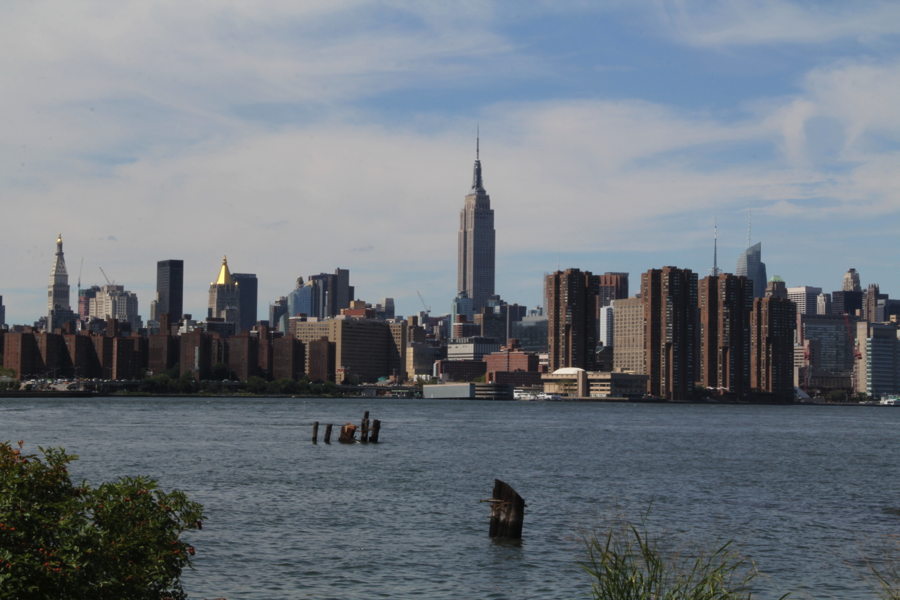 New York City is famous for its vertical landscape. While its affordability is still under questioning, its crowding rate continues to grow. (Photo taken by Ying Lu)

Most experts in the urban planning industry believe that the underlying cause of the growing crowding rate is the affordability of housing. Goldson argues that the city needs to be more available for middle-class people who are actually working here and potentially leaving the city if it is too small or uncomfortable to live here anymore.

From Reiss’ perspective, the way to solve affordability of housing is to amend its zoning code to encourage the construction of housing. Vertical construction is a trend and a solution to the crowding situation. But in the meantime, with more people living in taller buildings, the density would definitely increase. “If the city is really committed to increasing the affordability of housing, you have to be committed to increase the housing density as well,” said Reiss.