Located on the southwest of Brooklyn, Red Hook is beyond the reach of subway but has an incomparable waterscape. There are year-round ferries from Manhattan, which are free on weekends and the B61 bus line cris-crosses the neighborhood. But people can still feel a little isolated in this area. For artists, though, this is not necessarily a bad thing.
“Red Hook is a little bit isolated but I really like it,” said Deborah Ugoretz, an artist who just moved to Red Hook from New Jersey. “I guess that is the reason why so many artists like the neighborhood.” 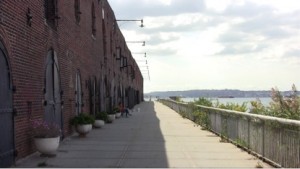 In 2015, Brooklyn Art Fund, an arts council focused on helping artists and art events in Brooklyn, distributed approximately $200,000 to 94 projects of Brooklyn based artists. Many artists like Ugoretz have moved to Red Hook to open studios or art galleries. The most obvious reason is the rent. According to Maryam Daghmoumi, Salesperson of Reality Collective, the price for apartments and studios is a little bit higher than Bushwick, but still much lower than neighborhoods like Dumbo and downtown Brooklyn.
A West Chelsea Gallery of 2,300 square feet and 1,200 square feet office is currently listed for $22,041.70 per month for rent while a 3,000 square feet Art showroom in Dumbo will cost $11,000 per month. But a 5,500 square feet space in Red Hook is going for just $9,000 per month.
“Everything in Chelsea is getting crazy, the galleries are too much commercial and too big,” said Anna Kustera, a gallery owner who just moved her gallery from Chelsea to Red Hook. “Here I can do something more experimental.”
The art market is also booming in the US. According to TEFAF art report, the global art market reached a total of just over $53.9 billion in 2014, an increase of 7 percent year on year and its highest ever recorded level. The distribution of sales by value in the global art market was dominated by the three major art markets of the US (39 percent), China (22 percent) and the UK (22 percent).
Now the neighborhood is getting set to transform again as the lucrative art business attracts the attention of real estate investors pushing up rents and potentially driving out the artists that initiated the neighborhood’s turnaround. EST4TE FOUR, an international group famous for transforming former industrial buildings into creative office complex, purchased three sites, totaling over 1 million square feet on 62 Ferris Street. The project includes a manufacturing center, a Marine Educational School, a hotel, public space and retail stores. Real Estate developer the O’Connell Organization has rehabilitated dozens of residential and commercial properties in the Red Hook, including a luxury apartment building at the waterfront on Van Brunt Street.
This September, the NYC Economic Development Corporation made the first presentation on the location of commuter ferry stop. Although the stop is still under discussion, a new ferry line is sure to be popular making it easier for people to get to Red Hook. Realtors like Daghmoumi, are already expecting the rents in Red Hook to rise with the development of the new buildings and transportation projects.
“When I moved here more than 20 years ago, my friend said I was crazy,” said Florence Neal, Director of Kentler International Drawing Space. “Now they want to move here but there is no place.”