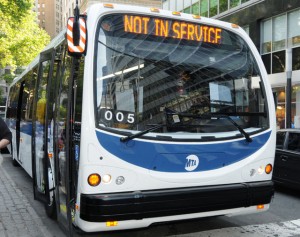 Staten Island, home to nearly 475,000 residents of which 70,000 travel daily to and from Manhattan via the Staten Island Ferry, experiences frequent delays in its bus service causing grave inconvenience to commuters.

“I have experienced delayed buses for years now. It doesn’t happen all the time but when it does, that means you are inevitably at least half an hour later to Manhattan because the Ferry leaves sharp on time,” said Ian Kasthuriarachchi, a daily commuter to Manhattan. Kasthuriarachchi, 27, is a student who works part-time in the city is one of the many travelers that have been inconvenienced more than once due to bus delays.

There are over 10 bus lines with service to the St. Georges Ferry terminal. The schedules are designed to ensure the arrival of the bus at the terminal minutes before the departure of the ferry.

According to the official web page of the Staten Island Ferry, five boats are used to commute an estimated 70,000 passengers each day within 109 trips, running 24 hours every day.

“If the bus is delayed even by a few minutes that results in me missing the ferry and the entire day is delayed causing a lot of stress and inconvenience,” Kasthuriarachchi said.

The World Population review in a census released in 2014 estimated the population of Staten Island to be at 475,000 people. The Island which spans 59 Square miles is the least populated Borough of the five Boroughs of the New York city, although it is the third largest in terms of land.

The issue of delayed bus service, however, doesn’t seem to have affected islanders who live and work on the island. “I haven’t faced such a dilemma. I travel to the city only over the weekend and I haven’t noticed any irregularity. Of course, there is the odd day but it is not common,” said Ayantha Jayasundera, a laborer who lives and works on Staten Island.

Still for many residents delays are a part of life.

The details of the audit published in April this year on silivenew.com (Staten Island Live News), drew a barrage of comments from commuters of the island detailing their experience of the bus service. Many of the comments criticized the bus service and called for reform of the service, following the release of the audit report.

“The MTA is too large of a bureaucracy.  It should be broken apart into separate municipalities by region so scheduling, finances and accountability can be better managed.  Tell me who’s job is at risk for the non-service to the commuters?  No one because when you’re a government entity, you don’t need to fear consequences for lack of performance.(sic)” WangoZeTango wrote on the comments section of the story. The comment was one of the few which identified the institutional issues resulting in the poor bus service.

Staten Island, like the rest of the city, has three different bus service lines ranging from express, normal and limited.  All of which are scheduled to work 24 hours a day. The delays in the bus service which is the focal issue of many commuters to and from Staten island continuesdespite the Island being provided with a tracking system of the bus service.

The MTA’s Bus Trek software has been installed in each bus stop to enable commuters to obtain ‘real time’ information regarding the buses which are scheduled to pass the stop, via text meesage.  in each bus stop

However, when New York University attempted to verify the accuracy of the system by sending the bus stop number 201962 to the listed MTA number 511123, it provided inaccurate information .

When  contacted via the MTA hotline 511 for comment, NYU was directed to several automated voice recordings which did not provide automation for a response from the MTA.

“We need a systematic bus service,” said Kasthuriarachchi. “It ensures smooth and efficient functioning of our day and it is paramount that this issue be addressed immediately.”