“The Importance of Méxican Products in Jackson Heights, Queens” 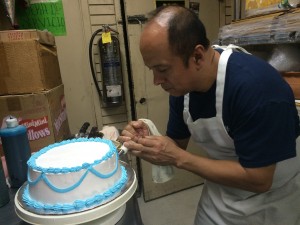 Sergio Ruiz, 50, owner of Méxicana Bakery, frosting a cake inside his bakery in Jackson Heights, Queens.

Located in the heart of Jackson Heights, Queens, on the corner of Roosevelt Avenue and 88th street, is Méxicana Bakery. Sergio Ruiz, 50, native of México and owner of the bakery stands in the back frosting a cake. He starts to write the words “Felicidades José Luis,” or “Congratulations José Luis,” in blue frosting. He brings me a stool.

“You sit here. I will work, and you can ask the questions,” says Ruiz, in Spanish.

Mr. Ruiz was born in the State of México, a free and sovereign state located near Michoacán and Puebla. He migrated to the United States in January 2000 in search of a new and prosperous life. All of his family still lives in México and he sends money back to them once a week. Despite living in the United States for 15 years he still does not speak English.

Originally, Mr. Ruiz started working at Méxicana Bakery as a baker. “My job was to bake bread and cakes,” Mr. Ruiz said. He suffered from alcoholism during that time. “I used to ask for my salary 5 weeks in advance, and when I ran out of that I would ask for more,” he said. “They would tell me ‘why should I lend you more money when now you owe me money?’ I would tell them, ‘I need it to drink, of course.’”

Mr. Ruiz realized he needed to make a change in his life. “I would wake up, drink and fall asleep. That was my life. That was no way to live,” he said. He quit drinking in 2003 and started to save money. After he built a savings, which took him years, he bought the bakery in 2009. “After I quit drinking I noticed I wasn’t spending money on alcohol, so I started saving all that money,” says Mr. Ruiz. “And, I became the owner of the bakery.”

The Méxicana Bakery only sell products from México and to this Mr. Ruiz owes all of his success. “This is a Méxican store and there are only Méxican products sold here,” Mr. Ruiz says proudly. “Even the Americans and the Colombians come here specifically looking for Méxican products. Méxican people like buying things from México because it makes them feel at home.” The bakery’s popular sellers include pan dulce, molé sauces, juices and sodas pertaining to different regions of Mexico.

On weekends as customers flock from all areas of New York, and even from Connecticut, to purchase these products to get their sweet Méxican fix.

“I have customers that come from all areas to come here,” Mr. Ruiz said. “They purchase the pan dulce and candies that they can’t find anywhere else.” The Méxicana Bakery has been around on Roosevelt Ave. in some form under several different owners for 25-years.  “When this bakery first opened, some time in the 80s, there was always a line of customers waiting to pay and the line went all the way to the back,” Mr. Ruiz explains. “I think my customers remember those times and still come back.”

Stephanie Mellado is a 23-years-old Méxican-American woman living in Jackson Heights who works as a cashier at El Popo Mini Mexican Market, a business two doors down from Méxicana Bakery. Her parents are both from México. Ms. Mellado has two young sons and feels it is extremely important to have products from México in Queens in order to teach her children about their culture. “My kids were born here and it’s good for them to see products and foods that are from México, and not just products from America,” Ms. Mellado says. “I always tell my sons that they aren’t just American, they are also Méxican, and I remind them to never ever forget that.” She explains that being able to buy products from México is also important for her parents.“My parents don’t have it all but at least they can have a little piece of home,” she said.

Queens is considered to be the most racially and ethnically heterogeneous of the city’s boroughs. It is easy to see this diversity by simply looking up and down Roosevelt Avenue. Queens is also the most diverse county in the United States, according to the census. Latino-Americans make up 31 percent of the foreign-born population; even the number 7-subway line, that connects Times Square, Manhattan to Queens, is known to locals as “the International Express.” The blend of cultures in Jackson Heights is what makes this neighborhood so distinct and why so many Méxican immigrants settled here.

Jackson’s Height’s Méxican presence is proving to be a comfort to other Spanish speaking immigrants too. Maria, a cashier at Méxicana Bakery, who did not want her last name printed for personal reasons, is originally from Bolivia before moving to Queens with her family. “When I first worked here, I didn’t know anything about Méxican food,” Maria says in Spanish. “But then I started learning and now I like it. There is some food from Bolivia around here, but not much, so I like learning about Méxican food.”

For many of his customers Mr. Ruiz’s success as an entrepreneur is living the American Dream. Although his Méxicana Bakery is making its business to help immigrants make America their home too, there is still one thing missing for Mr. Ruiz. “The only way I would live the American Dream is if I had my entire family, my complete family, here,” he says. “That is the true American Dream.”