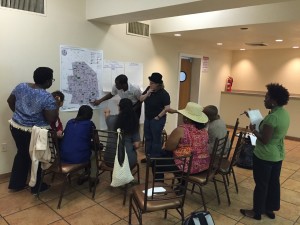 This past Saturday morning members of the Bedford-Stuyvesant community walked into the community board room of Restoration Plaza with the intent to have their voices heard.

They came to take part in the first of a series of participatory budget meetings held in the 36th district, which would allow them to come up with ideas and vote on how the city should spend $1 million of its infrastructure budget to directly impact the quality of life for its residents. After Councilman Robert Cornegy opened the meeting, his staff took over to inform the attendees that they would brainstorm ideas to present to the group, which would then be captured and voted on later in the process.

Participants were eager to share their ideas. Some residents wanted a modern recreation center for the youth, some residents wanted more lighting and security cameras in the city parks, some wanted more bus shelters and seating for the elderly. However, as it became clear that a lot of their ideas pertained to fixing what had been broken for some time, some questioned how the district had let its infrastructure get so run-down in the first place.

“We would like to transform Marcus Garvey Boulevard into a historical cultural extravaganza [with historical markers, murals, and statues] so anyone who drove or walked down the strip would be able to learn about the many aspects of Garvey’s mission,” said educator, activist, and lifelong resident of Bedford-Stuyvesant, Jeffery Kazembe Batts. He was one of the residents who worked to change the street’s name, formerly known as Sumner Avenue, back in 1987.

On the other hand, Reginald Swiney, owner of R.S. Painting Co., Inc. of Bed-Stuy, urged participants to question where the district’s money is already going before submitting ideas. Swiney who also ran for City Council in 2013, but lost to Councilman Cornegy, feels that urban city governments are generally poorly run and that residents should hold the politicians they vote for more accountable for bringing about visible change.

“Even though gentrification is what it is, it’s a quality-of-life that we have not [ever] had the opportunity to enjoy. He said of longtime Bed-Stuy residents. “Now, we have new folks coming into the neighborhood with new ideas and new initiatives and asking the questions ‘why is this like this?’” Instead he argued that what residents need to know is: “So for years how has this money been being spent?”.

In response to participant concern over city spending, district Chief of Staff, Stefani Zinerman, noted that the district posts the projects they fund every year on their website as well as in their newsletter. She also notes that fund allocation is not as straightforward as residents may think and hopes that this participatory process gives them a glimpse into what council members have to go through on a regular basis.

“What’s difficult is that it’s not an endless pool [of money]. For as much as the city has a big budget, that money is split up 51 ways. So, every council member gets their portion of the budget and it’s a drop in the bucket when you’re talking about some of the large infrastructure projects that we really want to see happen in our district.”

When asked about having to use the $1 million to possibly supplement the work that has not been addressed by city agencies, lifelong Bed-Stuy resident and meeting participant Shatia Strother sees the many facets to the process but feels that more good than bad can come out of it.

“If you want things to get done you can’t always rely on city government or the federal government,” she said. “Sometimes you do have to take charge and say ‘listen these are the things that need to get done and since you aren’t doing them, we are going to step in and allocate that money.’ So yeah, I can see it as a complaint but I also see it as an opportunity to reclaim power.”