A New Trend of Work Space In Red Hook

Like a typical New York commuter, Paul Coughlin, an architect, wishes to stay at home and avoid squeezing into a bus or subway during rush hour. But the size of his apartment does not allow him to work at home and he prefers company while working. After three years of working in a traditional office building, Coughlin finally found another option: co-working space. “I like the location a lot,” said Coughlin. “I really enjoy the feeling when I travel in the opposite direction in the morning.”

Co-working spaces allow people to work independently on their own desk or in a private room but still have a social environment. Now, SHARED Brooklyn, a new co-working space, which opened formally last November, brings the trend to Red Hook.

“There is nothing like this in Red Hook,” said Allison Reeves, owner and founder of SHARED Brooklyn. “This is not the only co-working space, this is a growing trend.”

Reeves, who lives in Red Hook, a year ago was working at home as an architect. She found it was fun at first but realized she could not get anything done. “There was no structure of work at home,” Reeves said. She wanted to work for herself but she did not want to lose the benefits of the office like copy machines, free coffee, and larger space. So she started to design a co-working office.

Located on the south of Louis Valentino Junior Park, SHARED Brooklyn offers good views of the waterfront, the Manhattan skyline and a free vista of the Statue of Liberty. Furnished with natural wood materials, the office also took advantage of natural light from French windows. Apart from shared desks, there are also four private office rooms.

Although the view is fantastic, for the first 6 months it was hard for Reeves to find people to sign on for the shared workspace. The isolation of Red Hook from public transportation added to the initial recruitment problem, she thinks. (Coughlin takes a subway and a bus from Fort Greene.) But that isolation turned into business advantage as more people living in Red Hook began to join the office not wanting to commute outside the neighborhood.

“I was almost broke at first,” admits Reeves. “Now I finally meet my cost and cover all the expenses.”

“In cities like New York, where real estate is expensive, the trend of sharing space is very important,” said Donna Goodman, an architect and part-time professor of New York School of Interior Design. “The designer should also try to find a way for the small businesses or individuals to express their own identities.”

Based on different career needs, some co-working offices began to design the office for specific type of work, like Brooklyn Writers Space, for writers, or IFP’s Made in New York Media Center, which targets people in tech, media, artists, entrepreneurs, and creative professionals devoted to stortytelling.

SHARED Brooklyn now provides four membership plans from $225 to $750 per month based on the different choices of working space and desk types. A day pass of $30 and conference room rental service are also available. “I think the price is affordable,” Coughlin said. People who would like to be on-duty for guest reception and other affairs once a week can also enjoy a work-share discount. Now, there are 11 people who have permanent desks in the office.

Although Reeves designed four private office rooms, people tend to prefer to work on separate tables in the public area. Most people are attracted to the cheaper cost of the public area and the opportunity for inspiration from company.

“I love having people working around me,” said Mary Ann, a property manger who lives in Red Hook and works for herself.

The working environment in SHARED Brooklyn is also different from ordinary office buildings in some aspects. The most obvious one is the presence of pets. None of the people working in the office have opposition to animals, so Reeves and another architect bring their dogs to work every day. There is also no dress code in the office. A formal suit is more bizarre than a T-shirt and a pair of jeans.

In order to attract more people, SHARED Brooklyn hold parties and small events via email invitations or Facebook Events. Reeves sometimes sets up a table during the neighborhood holiday event to advertise.

Introduced by a friend, Coughlin has been working in SHARED Brooklyn for about one month. He is satisfied with the new working space now. “I am still getting used to this place,” said Coughlin. “But maybe we can cooperate in the future (with other architects). 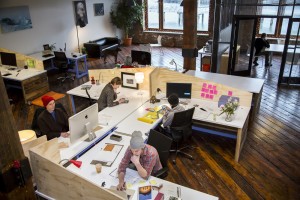