The Nostalgia of Food

Since it opened in 1999, the Le Baobab Restaurant has been providing New York with more than just a taste of authentic Senegalese food, for the growing number of Senegalese immigrants living today in West Harlem, it also provides the smells that give them a much needed link to their Senegalese heritage. 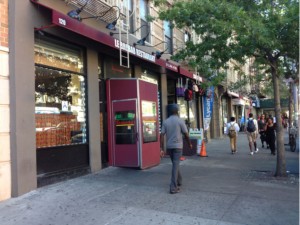 “The food helps people to be attached to their country,” said chef Ndioga Cisse, speaking in French, who has been working at Le Baobab since 2014.

Data collected by the New York Government for a 2011 Census found that there are approximately 9,537 West African immigrants living in Manhattan, a 2,486 increase from the year 2000. Although many come here with an ambition to make a clean break and assimilate to the culture of their new home, for many, a graduated or partial assimilation is preferable.

There are six restaurants that have sprung up so far within the area of Harlem known as Little Senegal in an effort to help immigrants find the familiar scents and tastes of their nativelands.

The ability to smell, it’s such an integral factor to the way we perceive our world that the very words we use to describe smells often transcend their original usages to become everyday expressions for things that don’t even involve our olfactory organ.

And it’s no coincidence that our ‘smell’vocabulary is such a big component of our daily self-expression. “A substantial body of empirical and theoretical evidence suggests that scent is among the most powerful triggers of nostalgic memories,” writes Dr. Ulrich R. Orth and Dr. Aurelie Boorain in their 2007 study on scent and nostalgia

Because olfactory sense data is so strong in its linkage to memories, many people go to restaurants that serve dishes from their native cultures. These dishes provide the smells that allow immigrants to, for a moment, experience a return to the traditions they have left behind.

In West African village life, cooking is often an endeavor that serves to bring families and communities closer together. “In Senegal we cook everything together,” Cisse said.

A meal is usually prepared by the family before they go off to work for the day and then enjoyed together after it has been allowed to cook all day long. However, this factor, the necessity to let a dish cook for several hours creates lots of problems for people trying to adapt to living here in New York. Tiebu Djen for example, is prepared by heating fish and various other ingredients for several hours, before finally pouring the mixture over rice and sweet potatoes.

But where there is a problem there is usually also an opportunity. This opportunity has been taken up by restaurants like Le Baobab Restaurant. And, not only does it provide the nostalgic tastes and scents of home to the many appreciative individuals who have immigrated here from Senegal, it also plays a central role in helping families teach younger generations who have been born here in the U.S. a little bit about their ancestral culture.

“The immigrants bring in their children and babies to provide them with a link to the past,” Cisse said.