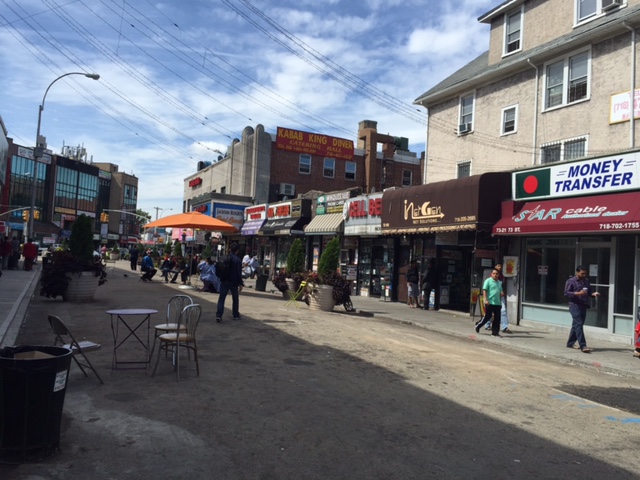 As Diversity Plaza in Jackson Heights, Queens, gears up for a second stage of restoration that is costing the Department of Transportation $2.5 million, issues surrounding the public safety and inherent value of pedestrian plazas in the city have emerged.

The Diversity Plaza was created in 2011 by shutting down one part of 37th avenue between 73rd and 74th streets in Jackson Heights after a study on traffic done by the NYC Department of Transportation determined that this intersection had the highest number of car accidents in the area. The pedestrian plaza was added in the venue as part of a citywide campaign to create more engaged, open public spaces. Currently, the plaza is little more than a closed off road with a few scattered chairs and tables.

“Jackson Heights suffers from a very severe shortage of open space, in terms of parks space. Citywide, it is ranked at the bottom,” says Len Maniace, President of the Jackson Heights Beautification Group (JHBG), which has been active in its advocacy for transforming the space.

In August, however, during the height of the “Painted Ladies” controversy when New York Mayor Bill de Blasio was under pressure to resolve uproar over topless women soliciting money in Times Square, NYPD Police Chief Bill Bratton put the future of such pedestrian plazas into question when he made the controversial suggestion that the Time Square plaza, a hallmark of the Bloomberg administration, should be removed. The comments were met with swift criticism from urban planners and alternative transportation advocates, as wells NYC Council Speaker Melissa Mark-Viverito who tweeted against the move. De Blasio has since commissioned a task force to determine the next steps with the Times Square plaza, whose recommendations will come out on October 1st.

While the topless women may be something unique to the Times Square plaza, Maniace of the JHBG admits that there are problems with Jackson Heights’ Diversity Plaza as well, specifically with “issues with the homeless and mentally ill there,” but notes that part of the solution would be to have “an increased police presence.” Security has in fact been stepped up since multiple complaints last year. Two police officers are supposed to be on duty at the plaza from 2PM through 6AM. However, local businesses maintain that the police aren’t quick to respond to complaints, and little police presence was visible on recent visits to the plaza.

But much of the onus has been put on locals to maintain the plaza. The Jackson Heights Beautification group president believes that the local business owners should take more ownership by sweeping the street and making the space amenable for visitors to sit outdoors.

In fact, an organization named Sukhi, which stands for “Social Upliftment through Knowledge Initiatives” has been started by businessman Agha Saleh, a local sponsor of the plaza, to ensure the maintenance of the Diversity Plaza. But funding from a single promoter is not enough, so the Neighborhood Plaza Partnership, a project of the Horticultural Society, whose goal is to help neighborhoods transform public spaces, has provided additional funding to take on some of the costs of plaza maintenance.

Not all local businesses are pleased with the plaza however, or inclined to support it. Padma Kamdar, one of the owners of the “Noble One” store directly overlooking it declares that the plaza “is the worst” and because of it, business has gone down. Furthermore, she says that because the plaza is a congregating spot for “drunkards and the homeless,” it is a public menace.

Perhaps part of the reason behind the local lack of effort in maintaining the area is because this plaza was created directly by the Department of Transportation, unlike others in the city where local organizations had to file a petition for one. Kamdar says, “Nobody consulted us. One fine day, we saw that the road was closed.”

Named to honor the ethnic diversity of Jackson Heights, the plaza aims to be a space for different communities to interact and come together in a public place. Jackson Heights is known for its mix of several immigrant communities, the Hispanic and Asian communities being the largest. According to the 2010 U.S. Census figures the local population is 57.2 percent Hispanic, 20.5 percent Asian of which 4.7 percent is Asian Indian, and 3.1 percent African-American. The plaza is in fact located between what is known as Little India and Little Pakistan, perhaps apt for a neighborhood reputed for its dense South Asian population. A wide array of cultural events have taken place in the plaza since 2011, from film festivals to reading marathons as well as cultural gatherings and protests from the various immigrant communities.

The construction, which is set to begin in spring 2016, will involve improved landscaping as well as infrastructure. But will it be enough?

“You don’t want these planning initiatives to just be cosmetic, the built infrastructure isn’t necessarily going to solve all the problems that are going on in the community,” cautions Melissa Checker, Urban Studies Professor at Queens College, CUNY. She notes that issues faced by pedestrian plazas in less affluent neighborhoods often persist despite the influx of resources into the space. “If you’re not addressing issues of housing affordability and jobs, sure you’re going to run into problems.”

But for now, many Jackson Heights community leaders remain optimistic about the eventual transformation of the space. The Beautification group’s Maniace compares the plaza to many of New York City’s parks and remarks, “If every other place has been able to get better, why can’t this place get better? I don’t think it makes any sense that of all the places in New York, this is the one place that cannot improve.”