The six-month temporary contract of the controversial Pan American homeless shelter is expiring in December. Residents in Elmhurst have protested three times as they waited  to see the city’s next move: make it permanent or shut it down? To their dismay, after waiting for four months without word, the city has just decided to seek a long-term contract for the shelter, according to the Department of Homeless Services. DHS will hold a public hearing on Nov.13th before finalizing the decision. A draft of the proposed contract will be available at DHS’ offices for public review prior to the hearing.

The decision of making the shelter permanent is not an answer that the community has been waiting for.

“We’ll continue to fight,” said Jennifer Chu, a resident who lives one block away from the shelter, also a community activist who helped arrange the summer protests against the shelter. Chu expressed her frustration at hearing the news. She hopes that the public hearing will be a “real dialogue with the community”, something that was missing when the shelter first opened in June without the consent of local residents or elected officials.

Despite the city’s decision, the community and homeless people in Pan Am have identified a common goal – move residents from the shelter to stable housing. This goal falls in line with Mayor Bill de Blasio’s strategy of fighting homelessness, but with many existing problems to overcome, shelters like Pan Am is still deemed as necessary by the city. In the last year, five shelters opened in Queens – which holds only nine percent of the shelters citywide. And more are planned to open in Glendale, Rockaway and Bayside, each triggering huge objection from the community. The controversy and awkward situation of Pan Am and new shelters across Queens has shed light on the city’s dilemma and struggles of combating homelessness. 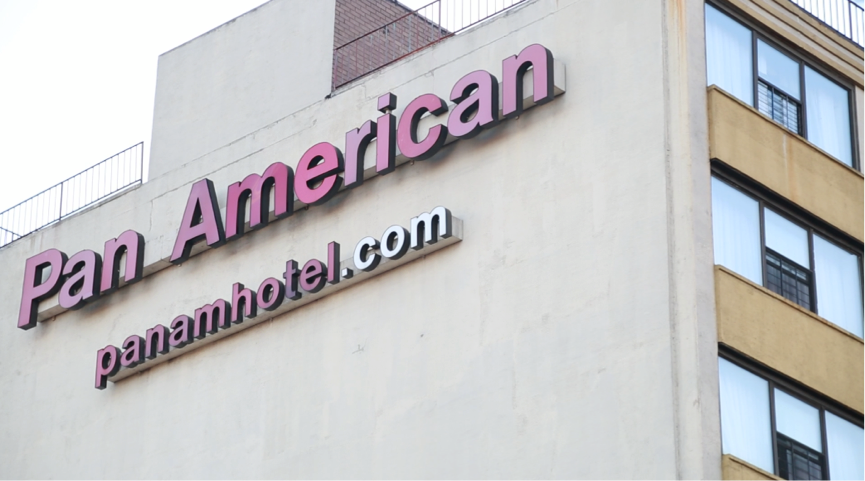 The community argues the conditions of the former hotel are inadequate to house the 180 homeless families in single rooms, even temporarily.   “We don’t believe homeless people should be put into shelters like that, ” said Rosemarie Dario, president of the civic group COMET which played a major role in community’s protests. “How does the child do their homework? How does a child go to sleep if the parents are still awake? These children are raised not knowing what a regular household looks like.”

Many homeless people from Pan Am agree that the shelter is anything but a “home”. In late August, the homeless residents carried out their own protest – against the shelter demanding better housing. “Having several bunk beds in a hotel room is not a home,” said an active member from Picture the Homeless (PTH) known as Ms. K. PTH is an NGO run by homeless or formerly homeless people which helped arranged the protest of the homeless families in Pan Am.

As a bridge between the community and the homeless, PTH helps to present the common goal of the two sides to DHS. “In one of our discussions with community members, they indicated there are many empty homes in the area; the rent will be a lot cheaper than what government pays for the shelter,” said Ms. K. 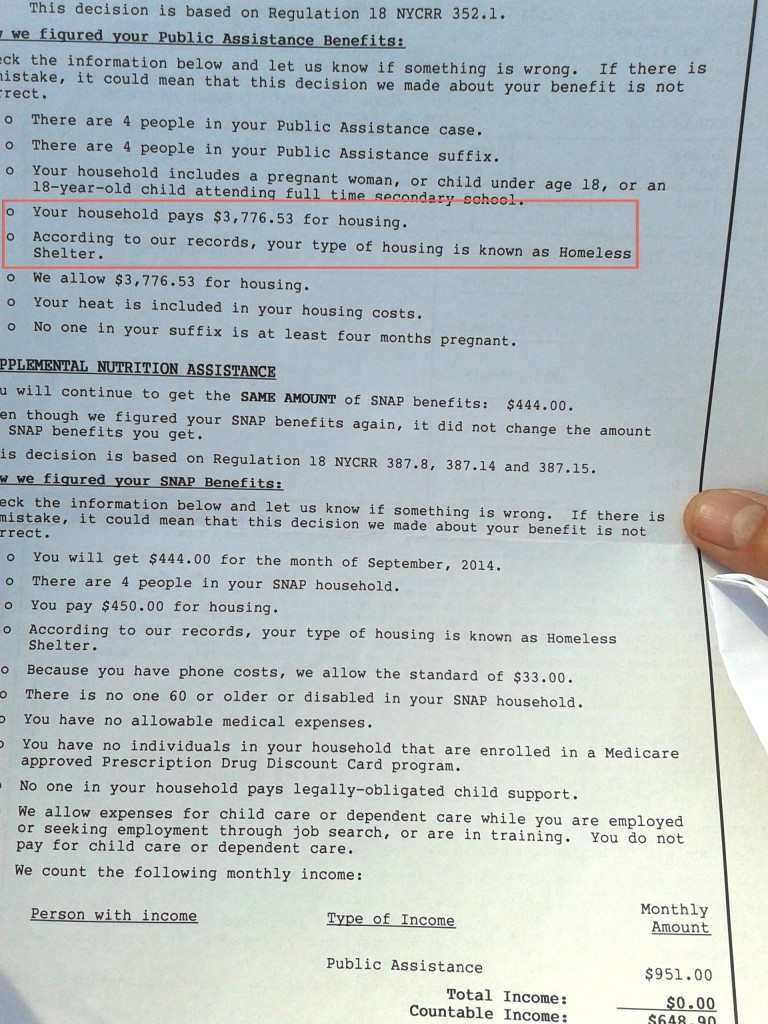 A budget letter to a homeless family in the Pan American Shelter (later known as Boulevard Family Center). Courtesy of Jennifer Chu.

The city pays $3000 to $4000 per family, per month for residents in Pan Am, according to a homeless family’s budget letter. That’s much more expensive than the average rent in the area. More importantly, as PTH found in a citywide count of vacant buildings (2011), there are enough properties to house NYC’s population of homeless five times over. In light of this reality and the community’s advice, PTH suggested DHS move homeless people from Pan Am into regular housing.

The direction that PTH and residents in Elmhurst are trying to move in is in line with the current administration. The revival of rental subsidy programs is one of Mayor de Blasio’s major strategies to deal with homelessness. According statistics from DHS, there are more than 58000 people living in NYC shelters each night and the number is still growing dramatically.

On Oct 21st, the city added over a million funding into a new program called Living in Communities (LINC), a rental assistance program to help families get out of shelter and move into stable housing. LINC was created by the new administration to target three specific groups of homeless people: those who work full time, or have income but can’t afford housing, plus domestic violence victims.

The LINC program has already made some progress in the Pan Am shelter. “I have a couple of friends who successfully participated in this program,” said Caparis, a resident in Pan Am, who did not want her last name used because she is a victim of domestic violence. One such friend who works in the JFK airport and qualifies for LINC has already found a place to live outside the shelter in which she will be required to pay 30 percent of her income for the rent while the government subsidy covers the rest. “By the time Christmas comes, she’d be in her own apartment,” said Caparis, who could barely conceal her admiration.

A chart showing the rising number of homeless people in NYC, from Coalition for the Homeless.

However, critics don’t have much faith that LINC is the solution, as the subsidy only lasts a few years and covers a small portion of the large homeless population. “When you look at all the people who are homeless, that’s a drop in the pan,” said Ms. K from Picture the Homeless.

While transitioning homeless people into permanent housing may still be a long way off, there are urgent problems to deal with. Many landlords of “cluster sites” – an old criticized shelter model which house homeless people in private apartments paid for by the city– have evicted homeless residents due to city’s recent rate cut. In response, the city needs to find more motel shelters like Pan Am to house the rocketing numbers of homeless.

DHS didn’t give any response with regard to the reasons for the recent opening of intensive new shelters in Queens.

While the final destiny of the shelter remains undecided, the community in Elmhurst is prepared for any possible outcome. The council member of the district, Daniel Drome is trying to reduce the size of Pan Am shelter, according to his office. Jennifer Chu is working on building up an umbrella group to unite various local civic groups and residents to continue protesting against the shelter. She fears that the shelter might arbitrarily become permanent just like how it first opened.

“If the city again makes a decision without going through proper protocols and sufficient community input,” she said, “we might consider bringing up a lawsuit.”