Industry City is a 6-million square foot warehousing and manufacturing complex on Sunset Park’s industrial waterfront. It was the nation’s biggest industrial manufacturing complex in the early 1900, before it was left abandoned for 30 years. Manufacturing businesses started coming in again in the 1970s, but as the economic recessions in the late 1990s and 2000s repeatedly hit the nation, Industry City continued struggling to revitalize itself. The complex remained under-utilized and neglected, leaving the surrounding industrial area unsafe and inaccessible to the local residents. The soaring illegal activities taking place in the decaying buildings were not a secret. For the past 50 years, Industry City and the surrounding industrial waterfront area have been known to the local residents as the part of the neighborhood ‘that no one goes to,’ – but, that is about to change.

Today, Industry City looks completely different than it was a year and a half ago. Since 2012, Industry City has been undergoing an extensive revitalization lead by its new owner and investor, Jamestown – who also owns the Chelsea Market in Manhattan – along with the complex’s three other owners – Angelo Gordon and Belvedere Capital, Cammeby’s International, and FBE Limited. Still the biggest industrial complex in the northeast, Industry City recognizes its manufacturing heritage and wants to remain as a manufacturing hub – but now it wants to do more than that. It wants to drive the innovation economy. 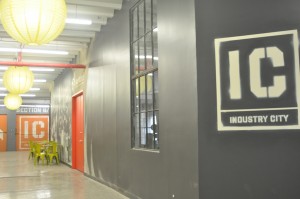 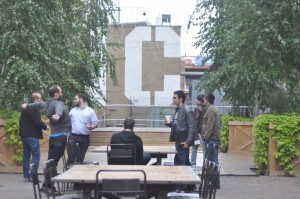 From sculptures to wood-making and from food to 3D printing, Industry City houses hundreds of different manufacturing operations. By letting big and medium-sized businesses operate within the same complex, Industry City provides its tenants with ample opportunities to creatively engage and collaborate with each other – a rare scene in many manufacturing districts.

“We keep seeing our neighbors every day, and that let us to engage in conversations about our business – how to innovate, how to collaborate. To me, that’s innovation economy,” said Andrew Jolse, the co-founder of Colson Patisserie, which has production space located in Industry City Food Hall.

Robert Atkinson, the author of “Innovation Economics: The Economic Doctrine for the 21st Century,” defines innovation economy as a system that “reformulates the traditional economic growth model so that knowledge, technology, entrepreneurship, and innovation and are now positioned at the center, rather than seen as forces that operate independently.”

Taking this theory into practice, Industry City wants businesses under its roof to foster production work along with the creative work within the same ‘maker’s space’ – without separating the two processes in manufacturing business. Food manufacturers, for example, are asked to also have a retail window alongside their manufacturing and wholesale operations. The manufacturing space also has a two-foot glass panel bordering the hallway that allows outsiders to see the process of manufacturing food.

“I think those are the things that people look at now and think that ‘this is the 21st century manufacturing.’ You don’t really see these old kind of factories anymore. There are not so much – even in New York State,” said Cristal Rivera, Industry City’s Director of Community Engagement. “But we’re showing people what this new economy is, what’s this manufacturing means in today’s world.”

Many tenants at Industry City share a similar trait – they are often risk-takers with love for innovation. For food and beverages business owners, the daily interactions that they have with the other tenants of Industry City – who are also their regular customers – have helped them foster innovation in their business. 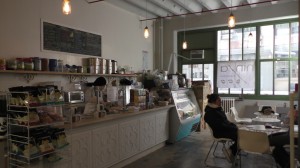 Ninja Bubble Tea was only serving tea when it  first started its business in Industry City in September 2013. However, the opportunity to engage with their customers, who are mostly artists, allowed them to experiment with other menus as their customers are always open to providing suggestions. 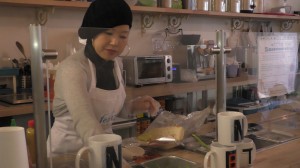 “We might not have grown as artistically if we didn’t start our business here (in Industry City),” said Chantha Uy, co-founder of Ninja Bubble Tea, which is the only retail-only business in Industry City. Uy co-founded the bubble tea store with her friend, Soomee Suh. Both are also practicing nurses, with deep passion in entrepreneurship.

Ninja Bubble Tea is also well-known for being open to sharing space and collaborative works. Both Suh and Uy are open to displaying and selling artworks of other tenants in their store, as most of these tenants’ space is on the upper floors. An artist named Julia Yong was even given one whole shelf to display her works there – at no cost.

Colson Patisserie, on the other hand, has also benefited from collaborating with other businesses.

“We sold parfait once, and we got all of our granola from Granola Bar next door. Rather than going for extra cost getting it somewhere else, we get it from here. It’s a win-win,” said Jolse. “No two food production business here sell the same thing. Their products are all unique on their own.”

To Suh, Ninja Bubble Tea, which is the only beverage business in the complex, also has a unique way to participate in the thriving innovation economy in Industry City. “We are the ‘nourishing’ part of the system, the foundation to keep [other tenants] going,” said Suh. “We feed them, and keep them energized.” 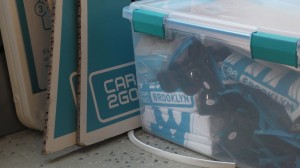 “It’s always so easy to collaborate with other businesses next door, or on different floors,” said Jennifer Urrutia, Marketing and Promotions Coordinator of Car2Go, a new smart-car-sharing business. “Today we collaborated with [Ninja Bubble Tea] on the ground floor and they provided us with tables to sign up for new customers.”

Before the revitalization took place, Industry City was a manufacturing complex that was not accessible to the public. Its decision to make its facilities accessible to the public for the first time, along with the introduction of retail windows, are in hopes of benefiting the local community, according to Jeremy Laufer, the District Manager of Brooklyn Community Board 7.

“They are bringing in innovators, new jobs, and they are creating what should be thousands of new jobs there. It has been a regional power house in the past, and it can be again,” said Laufer referring to the industrial waterfront.

Making the complex accessible will also give a chance for local residents to participate in the innovation economy, according to Rivera.

“We think of it more like, just opening the gates so people can actually see and learn what’s happening in the site,” said Rivera. “[They can] also see things that are made in Brooklyn, which I think is interesting, because it’s on the rise again, but a lot of people don’t really know that means.”

Despite the positive effects that come with the revitalization, Industry City has a long way to go. The revitalization process, however, did not happen without controversy. Repairing and maintaining the entire complex costs more than $300 million. In order to maintain the facility, the new management has increased the rent up to 50 percent last year, pushing many tenants out of the complex, and slowly changing the dynamic of the businesses there.

Local residents, on the other hand, are also not fully aware about the revitalized industrial waterfront, and many do not know how accessible the complex is to the public, due to the long history of the abandonment of the area.

“When we talk to local residents, many don’t even know that we are here,” said Uy.

To address the issue, Industry City has been making efforts to engage with the local community. According to its website, Industry City is also revamping its complex into a “pedestrian friendly series of shops, showrooms, event spaces and courtyards” in order to make it more inclusive and accessible for the public.

“We had a national manufacturing day, where we toured about 60 or 80 [students] from one of the local schools to come down here and to go into the spaces and see what making things means,” said Rivera. “I think that’s chipping away people’s mental barrier about whats happening in this side of the neighborhood.”

Industry City still has a long way to go to fully engage the local community with jobs and opportunities on its site. But to Rivera, for now, Industry City’s aim is to make sure that the younger generation in Sunset Park and Brooklyn will be exposed to the endless possibilities in the innovative economy that the complex is bringing in to the neighborhood.

“To me it’s really important that we are engaged with not only people who are looking for work, but also people who have young children and for them to not be defined only by careers like teachers or lawyers or doctors. But let them know there’s also a world of possibilities and there’s a way to get there,” said Rivera.

She added, “Who would’ve told me that one day people will be creating apps, right? But if there was a means to be exposed to that as a child, saying that your future is kind of truly open, I think that just changes the dynamic for a lot of young people.”