Renovating the Bridge Between School and Community 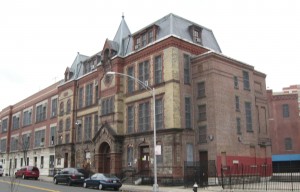 It is a recent Thursday afternoon about 4 o’clock and students of all ages running around, laughing, playing, chasing each other, all normal after school activities of students. Except for these students in the Southwest Bronx, it happens in the concrete spaces underneath the Subway line. The issues for the kids in this community branch further than a lack of green space to play however. The public schools located here are among the lowest testing schools in the city. The lack of resources for kids in low income neighborhoods like Highbridge is often credited for poor performance in schools. The students are not only lacking parks and playgrounds but things to succeed in school like books and paper.

“They had no library…they had no arts, they had no bookstore,” said Agnes Johnson, a Highbridge community activist, “they had nothing but concrete.”

The three public schools in the Highbridge neighborhood of the Bronx are all struggling. P.S. 11 and P.S.126, both Pre-K through middle school, have tested between 15 and 25 percent lower on the English, Math, and Science New York state assessment tests. P.S. 11 received a D on the most recent New York school progress reports. (Despite its test scores P.S. 126 received an A but parents and educators argue that the school is still very much suffering.) The third school, the New Settlement Campus (NSCC), which extends from Pre-K through high school, is too young to receive its first official grade from the city. Center Coordinator, Alexandra Medina, insists that NSCC is doing “much better” than the neighborhoods other two schools but it is still plagued with the same challenges of lack of funding and a vulnerable student base.

The attendees of these schools are mostly students from a low socioeconomic background, or low-SES students. There has been extensive research on the struggles that teaching and planning for low-SES students brings to schools and school districts. While the obvious reasons include funding and transportation some reasons under the surface deal with the mindset of not only the students, but the educators as well.

“There’s insecurity with poverty, too much income goes to bills and the stress in the house impacts kids,” said Dr. Pedro Noguera a Professor of Education at NYU, “the key is mitigating the effects of poverty.”

There is no easy fix for these issues, no one-step solution that will solve all the problems that these schools face. “It’s a hard job,” said Carol Lamberg, former Executive Director of the Settlement Housing Fund, “it all starts with the principal, some know they won’t have the support.” This lack of support is part of what led to the retirement of Bernard Gassaway from Boys and Girls High School in Bedford-Stuyvesant. Mr. Gassaway stepping down has focused much attention on how the Department of Education treats these much maligned schools and the efforts taken to fix them.

While it may be too early to tell with certainty, reports on the surface have shown that community schools, like NSCC, are a step in the right direction with low-SES students. These types of schools are housed in community centers or in other spaces that run events, activities, and programs for all members of the community.

“Community schools give kids a safe place while their parents are working,” said Dr. Noguera. The NSCC in particular is laden with resources; new computers, books, recreation areas, that the rest of the neighborhood simply cannot offer.

“We love it,” said a group of NSCC high schoolers waiting for the train nearby, “it’s way nicer than the other schools around here.” With the amenities visibly available to students it is easier for them to see the investment that is being made in their future.

“We make sure they keep the space clean and kept up,” said Mrs. Medina, “when they see you care, sometimes that’s all the push they need.” The students and educators make good use of the resources provided such as the community terrace garden where many science projects are grown and looked after. This type of involvement encourages ownership, not only in the space but also in their education. The right leadership must be in place for these types of centers to flourish.

“We interviewed several candidates,” said Mrs. Lamberg when talking about selecting a principal for NSCC, “we needed someone who could lead the school and was willing to be active and play ball with the community.” Mrs. Lamberg explained that the design for these community schools is to get everyone in the community including parents and leaders on the same page involving education. They are set up to build an active support system that caters to the needs of low-SES students.

“They have systems in place that focus on development,” said Dr. Noguera, “not just academics.”