It was Sunday morning. Jinxiu Liu came to her Japanese Restaurant as usual. She opened the front door and prepared to welcome the first diner. This was her routine for the past year. Everything was pretty much the same; except that today her rent was $8.19 more rent than the same day last year.

Liu was not the only one who suffered from the rising rent in Brooklyn. According to a recent report released by Douglas Elliman Real Estate, Brooklyn housing prices reached a record high, with the median sales prices increasing 4.5 percent to $575,000 and the average sales prices increasing 16.6 percent to $783,296 from the same period last year.

“The trend in real estate values, both commercial and residential properties, has been rising in Sunset Park for years,” said Tarry Hum, Professor of Urban Studies at Queens College and Graduate Center, City University of New York via email.

The rising housing prices have had a negative impact on small business.

Liu’s friend, who also ran a restaurant in New York City, advised her that the best way to for her business to make money is by cutting rent to less than 10 percent of the monthly costs.

According to her lease, the restaurant’s rent increases three to four percent annually during the five-year leasing period. In order to cut the operation cost and to increase net profit, Liu employs only one chef and relies on her family to staff the rest of the restaurant. She herself works seven days a week as a waitress in the restaurant.

“I haven’t gone to the church for over one year, because I have to work seven days a week,” said Liu in Chinese, who regularly visited the church before running this restaurant.

Ten blocks away from Liu’s restaurant, there is another Japanese restaurant. This restaurant opened one month ago by Chunmei Lin and her elder brother. 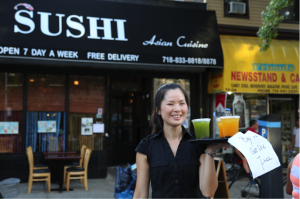 Chunmei Lin sells bubble tea in front of her own Japanese restaurant on Sept. 28, 2014. (By Runze Yu)

But rent was one of her major concerns before deciding to open the Japanese restaurant.

“Monthly rent for a 1,500 square foot commercial space in this neighborhood is about $5,000. My landlord, originally came from Canton, is very nice to me. He agreed to rent the shop to me for $3,000 per month. So I made my mind to take over it,” Lin said in Chinese.

Besides Lin and her brother, Lin hired another three workers. She paid each worker $110 per day, accounting for 30 percent of daily turnover.

Lin said commercial rents along Eighth Ave, one of the most prosperous commercial avenues in the neighborhood, are much higher and rising even faster than this area. A bubble tea shop on Eighth Ave, whose owner is a friend of Lin, pays $8000 a month for 300 square feet and the rent increases 5 percent each year.

“Along Eighth Ave, you can see stores that are divided into smaller areas or stalls for different merchants that each pay rent — this is another strategy for landlords to maximize their rental income by subdividing spaces for multiple commercial renters, “ said Professor Hum.

Both Lin and Liu live near Eighth Ave, saying their apartment rent is also rising, about $50 per year.

According to Jeremy Laufer, district manager of Community Board 7, residential rents have risen in the neighborhood with the increase in demand due to the growing immigrant population leaving not enough apartments to go around.

Professor Hum agreed that while the growing immigrant population creates demand in the real estate market it is not the only factor contributing to rising rents.

“I would say that perhaps more important than population growth is the increasing presence of investors, developers, financial institutions such as Chinese banks that comprise an immigrant growth coalition that is underwriting much real estate speculation and development,” wrote Professor Hum in an email interview.

Professor Hum pointed out that to solve this problem, the government should increase the supply of affordable housing in this neighborhood and NYC’s Department of Small Business Service should do better outreach to understand and address the needs of immigrant-owned small business.

“If the rent is not that high, I can hire one more staff. So I and my families can have some days off in turns,” Liu said.