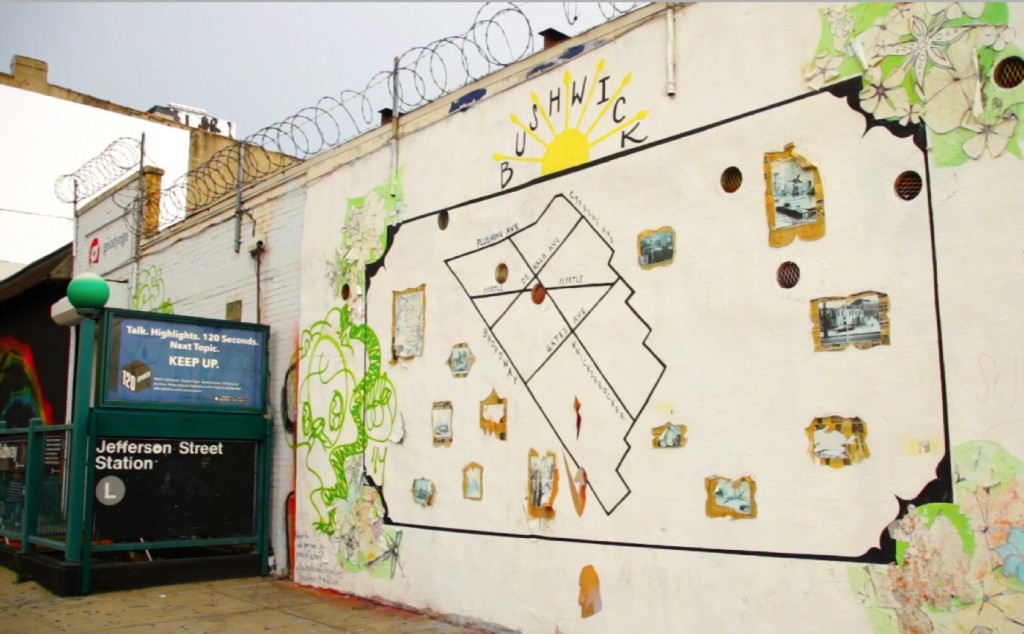 A mural painted outside the Jefferson Street Station off the L Train. Photo by Alberto Zamora

A dim light shined in the small living room of Agustin Ramirez’ and Joslyne London’s apartment at 314 Troutman Street where they met with the other few tenants of the building. Yolanda Coca, the only remaining employee of the Bushwick Housing Independent Project helped translate from English to Spanish the words spoken by attorney Gregory Louis on how he plans to prevent these tenants from being pushed out of the homes they’ve lived in for years.

“This is not the first attempt to displace them and will not be the last; and so we will always be present with them to address the next threat,” said Louis.

London, who has been living in Bushwick for decades recalls that her neighborhood was nothing like what it is today. “I’m telling you the neighborhood was bad, really bad,” she admits. In those years landlords were thankful to have tenants at all.

But now Bushwick is a neighborhood in transition, where the shifting forces that shape its population and landscape almost seem to occur in real time. Of the many observable trends, there seem to be two groups on either end of the spectrum. On the one hand there are successful young professionals who recently moved in and some can afford to keep up with market rent prices, on the other hand there is a community who decades ago, witnessed a place filled with gang violence and drugs turn into a safer livable location; but because of recent market demands for their space are being pushed out.

Adrian Cardona a long time resident of Bushwick started his real estate business five years ago and confirms the dramatic rise in demand for housing. “The neighborhood is in the middle of tremendous growth, the trend for the tenants coming in is mostly working professionals while landlords are transforming old single railroad apartments into two separate bedrooms,” said Cardona. He points out that a two-bedroom apartment five years would be at around $1,450 but that today it’s closer to $1,800.

The data confirms the young working professional trend. According to the U.S Census Bureau the median household income of renter occupied housing units in Bushwick rose by approximately $10,000 in one year, a remarkable 32 percent increase from $31,144 in 2012 to $41,145 in 2013, surpassing the median income of New York. Moreover, the data shows that the household income in Bushwick for the age group of 15 to 24 years has the highest median income of any other age group, $63,734; approximately $12,000 dollars more than the next highest, which is the 25 to 44 years group. 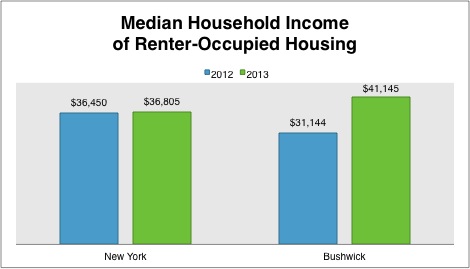 However, at the same time that many young professionals welcome the spaces they can afford, some long time residents are fighting for their right to keep living in the few available affordable housing units left.

“The ‘rent’ problem is that the supply of affordable housing such as their apartment (314 Troutman) is drying up in Bushwick mainly because some landlords are using illegal tactics to drive out low-income tenants,” said Louis.