Near the Jackson Heights–Roosevelt Avenue Station of the 7 train recently, a Bengalese man, Sanaul Haque, was laying out some poster-sized photos that he shot in 2017. He walked back and forth with a 135 mm Nikon camera slung over one shoulder, talking to people at the corner of Diversity Plaza, trying to draw attention to his grassroots photo exhibit.

Many of the photos were of children and families looking tired and struggling. Haque spent three months following and recording the journey of Rohingya people fleeing from Myanmar’s Rakhine State to Bangladesh’s Cox’s Bazar District. “They crossed the border without food, clean water, and medical resources,” he said. “No one helped them and many people died in this journey.” 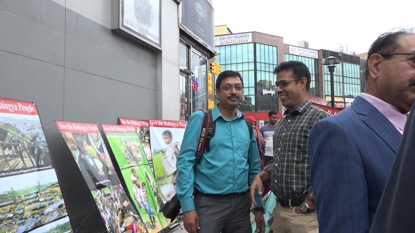 Since August 2017, more than 700,000 Rohingya people have fled from Myanmar, trying to get shelter in Bangladesh’s refugee camp which is the largest refugee camp in the world now, according to the United Nations Office for the Coordination of Humanitarian Affairs.

The timing of Haque’s outdoor photo exhibit was a deliberate choice to coincide with the UN General Assembly where international leaders will gather together to discuss the top issues across the world.

“I come here because [the] UN Assembly will be here in New York and lots of foreign countries will be involved in this assembly. I want more people to see these pictures, and I think by doing this, I can help these people,” said Haque, hoping the human rights issues of Rohingya people can be discussed further in the General Assembly.

Haque and other organizers chose Jackson Heights to hold this exhibit for its diversity and culture fusion. “Diversity Plaza is a very important place for all the people, so we are here. We chose this place to let people from all the community, all the nationality come and see,” said Abu Zafar Mahmood, a social activist in Jackson Heights who helped to organize this exhibit.

Mohiuddin Mohamad-Yusof was among the first-generation Rohingya immigrants who became citizens of the United States through the Refugee Act. He visited the exhibit to support the photographer and the plight of the Rohingya people.“I hope UN and every country could work together to solve this problem,” said Mohiuddin, President of the World Rohingya Organization (WRO), which is based in Jackson Heights. 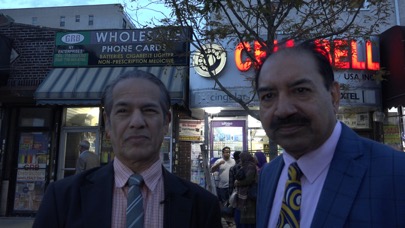 But Mohiuddin expressed concern about China and Russia’s influence in the UN. “China has a huge investment in Rakhine State. So if other countries want to pass a resolution, China may veto,” he warned.

Mohiuddin has spent forty-four years promoting public awareness of the issues related with Rohingya people. He goes back to Rakhine State and Cox’s Bazar every year to help Rohingya people there. He also tries to educate the new-generation of Rohingya people in the United States. “These American-born children sometimes don’t share the feelings I have, because the Rakhine State seems too far away from them. But as the sons and daughters of Rohingya people, they have the duty and responsibility to help,” Mohiuddin said.

Mohiuddin is working to get more people to care about these issues, sometimes giving lectures at universities, but his organization still faces funding problems.

“I hope one day more than one million Rohingya people can come back to their country with protection, dignity, and recognition of their own identity,” said Mohiuddin.