Aircraft Noise is Bad For Your Health 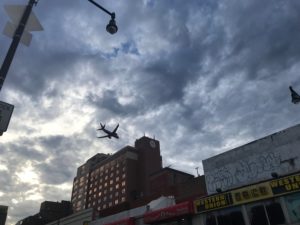 Low-flying airplane frequents the sky of Flushing every 3 minutes or less.

On a Saturday afternoon in July, Esther Jiang relaxed on the lawn in Kissena Park in Queens. The sun was shining, birds chirping and grass fluttered in the breeze. It was her first day off in two weeks. However, no matter how hard she tried to take a nap, her plan was ruined by roaring aircrafts overhead shadowing her body every three minutes.

“I feel like the whole neighborhood is not only built near the airport. It is the airport,” complained Jiang.

The current aircraft departing route from LaGuardia airport, also known as the “tennis climb” first designed to avoid causing noise to the US Open, tightly surrounds not just Flushing but all of Northeast Queens, according to a route map released by the Federal Aviation Administration (FAA).

Jiang, 53, who immigrated to America five years ago from China, has been living with her son in Flushing ever since. At first she thought it is convenient that the airport was a five minutes drive away. But soon she realized how disturbing it was at the same time.

“There is just no escape from the aircraft noise. At home, I shut all my windows but it’s no use. The planes fly right above the building, low enough to brush against it,” Jiang said. Jiang soon realized that the noise wasn’t just annoying but affecting bigger affects. “I found myself more impatient and irritable because of the noise,” added Jiang.

A study that was released by Columbia University last month about the affects of noise polution produced by the aircrafts found that Queens residents, like Jiang, are at greater risk of serious illness because of the noise. “The Tennis Climb increases airplane noises to over 60 dB over some most densely populated areas in the city,” the report reads. “An increased risk of cardiovascular diseases and generalized anxiety disorder are found associated with the aircraft noise.”

The report further concluded that aircraft noise could, in theory, shorten the lifespan of some Queens residents by up to one year, and even broader impact on the “health, economic productivity, and educational outcome among children.”

“It’s crazy,” said Jiang of the research findings. “I only regret we aren’t rich enough to move out.”

The Columbia University report has drawn the attention of local politicians including State Senator Tony Avella, who  urged LaGuardia Airport to change the flight path in a speech in August. However, the research ended up receiving no comment from both the Port Authority of NY and NJ, LaGuardia’s operator, or the FAA.

Avella, who was defeated by John Liu in the primary election earlier this month,  will now have less chance to give the legislation a further push. His office did not return repeated emails asking for an update.

The latest legislation that urged the FAA to study airplane noise passed in April and will not take effect until October 1st. Meanwhile, Queens Quiet Skies, an advocacy group, enables victims of noise pollution to file complaints with one press on a button on a mobile phone app, rather than filling out a complicated form on Port Authority’s website.

At least we know they, too, will keep making noise.