Faced with mounting pressure on the need to overhaul old trains and meet the demands of rising commuters, the Metropolitan Transport Authority is struggling to live up to expectations. While there has been much attention by the media and local politicians to delays during weekday commutes to work, the even more extensive delays in weekend subway service have gotten less attention.  But dozens of passengers from Gun Hill Road and Baychester Avenue in eastern and northern Bronx say routine track replacements on the subways have adversely affected their weekends that are not just filled with play but work too.

On a recent Sunday at the Gun Hill Rd station, several passengers hopelessly wait for the 5 train to commute to work. As the morning wears on, more and more passengers from the Bronx were waiting at Pelham Parkway station for the connecting trains to Manhattan, Brooklyn, and Queens.

“I still cannot get it despite the announcements and bill postings, when is all this maintenance work going to end?  I have tried to make a decent living from a weekend job but since [I] picked this job, I have always been reporting late. I’m getting worried honestly,” said Sam Johns, a resident of Seymour Avenue, who was waiting for the 5 train at East 180th street station in Bronx.

Johns said he usually takes the 5 train to Manhattan where he works, but finds the MTA weekend schedules confusing. “When you take the 5 train from Baychester, you have to change trains and transfer at East 180 where you take the 2 trains to Manhattan. In most cases, you wait for more than thirty minutes without any train. This is totally confusing,’’ Johns pointed out.

Johns is not the only one affected by track replacements work. Hajie Marega, a visitor from Spain who struggles to speak and write English said he was left stranded wondering what to do because some of the passengers did not have time to explain or talk to him. “I don’t know much English, I am stranger here, the people told to wait this way, I am not at the right place,” said Marega, looking desperate while making a point.

“I am here all day because I don’t know what train to take,” said Marega who wondered why the MTA did not have staffers at every major stop to help passengers transfer to other trains.

At 14th Street Union Square station, dozens of passengers waited in calm anticipation for the 5 train to get to Gun Hill, Baychester and 3rd Avenues at 6pm on Sunday, but their hopes were dashed as the MTA announced that there was no 5 train in sight.  “I am here with my wife and children, we want to hang out with friends at the Bronx but this is becoming a nightmare,’’ said Seans Balms.

Responding to the passengers, one MTA track supervisor, Emmanuel Sanchez urged passengers to continue to exercise patience as they work on the track replacements. He said work can only be done during the weekends. “We know that during weekdays a lot of people including children go to school so the delay will affect more people that’s why we felt that we can use the weekends to do some work,” said Sanchez. “During the course of the weekday, we usually post bills and make announcements that maintenance work will be carried out at certain places. It is wrong for anyone to blame us.”

In 2016, the most recent year available, the average weekday subway ridership was 5.7 million people, according to the MTA. It further pointed that this was the highest since 1948. The recent worsening service has received widespread media coverage. Last month, Andrew Cuomo seeking his third term as governor of New York and challenger Cynthia Nixon clashed over the New York city transit system. During the gubernatorial debate Nixon claimed subway delays have tripled under Cuomo and that train speeds are slower today than in 1950. Nixon also alleged that Cuomo stole millions of dollars from MTA to finance his pet projects. In response, Cuomo said: “my opponent lives in the world of fiction. I live in the world of fact.” 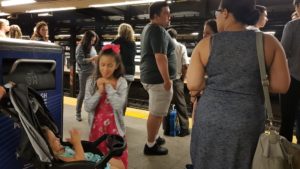