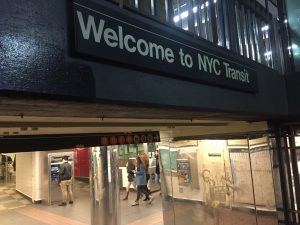 What can you find on the floor in the subway station? One of the city’s largest stations, 42nd street Times Square, offers an answer: an H&M bag, a Dunkin’ Donuts beverage tray, several Trolli gummy candy wrappers and shortbread cookies paper and some cigarette butts still with clear lipstick prints. Luckily, the rats are not here now. But what can’t you see? To find out the answer to that question a team of scientists from Weill Cornell Medical Colleges built the PathoMap, a map model online, which maps “the New York’s microscopic residents”.

The team collected the samples of organisms in 466 stations over 18 months. Researchers found there are 15,152 types of organisms in the subway system, from insects to viruses, though according to Dr. Christopher Mason, who headed the study, these “littlest New Yorkers” do not pose a public health threat.  The research was conducted partly out of Dr. Mason’s curiosity to know what is on the surface of our environment. And apparently the subway in New York City became the top choice since it is one of the largest systems in the world.

Despite researchers claims that a little bacteria won’t harm you, for newcomers, the PathoMap findings deepened their worries of being a daily commuter in New York City.

“I didn’t know the data before but it would be good to know, though it does not help remove my concerns at all,” said Yue Guan, a Chinese student in Parsons, who takes the path train and the R train to school every day. “I had my undergrad in Boston. I thought the subway in Boston was the most horrible one. I was too naïve. I forgot we still have New York.” She said it is understandable that this old subway is a little bit dirty, but it much dirtier than she imagined.

“If I have a choice, I would never sit on the seat in the subway unless I am exhausted to death,” said another student Yiyun Jia, from NYU art administration, who takes the N and R trains regularly. “The only good thing came into my mind about NYC subway would be the artists in it, nothing else.”

Despite all these concerns haunting in newcomer’s mind, Dr. Mason said people really should consider the issue in an opposite direction. “We always think about how to get rid of the bacteria. However, it is important for us to know how to enrich our bodies for good bacteria. Like you are already in the rainforest, surrounded by various species of organisms, it is important to know how to nurture the good, which still remains unknown to us,” said Dr. Mason.

It seems that the hygiene problem might bother long-time New Yorkers much less. “I take subways every day. I think they have really done a great job in keeping it clean. I know they clean it at every last stop and since there are so many people. Things get harder,” said Bella Gren, a high school student. The PathoMap findings did not raise her concern. “I don’t think it is something of great threat,” she said.

Arielle Persard is a mom with a 2-year-old daughter. She’s been in New York since 1997. Now she takes the subway 3 times a week to go to school and she does not really worry about the hygiene problem. “I would say some stations are relatively clean, some are really dirty. But I don’t think it is a huge issue,” she said.

Though, for visitors, the dirty subway is a must-know. “Before I came here, I was already told by a lot of my friends about what I am gonna face in the subway station,” said Alicia Zhu, a student from McGill University visting the city.

However, it does not bother their good impression of New York City. Matthias Lotz, on his second trip to New York from Germany, said that it is hard to maintain everything perfect due to the system’s long history. “But I went to Japan, the subway there is so pretty, clean and efficient. But you know, Americans.” He said he was just surprised that people really throw litter on the track since it is not only about the cleanness but safety as trash is a leading cause of track fires.

If you take five minutes to stay at the entrance in 42nd Times Square station, you will find that there are about 120 people coming in, and almost the same getting out. Half of them would touch the steel handle-bar. Ten percent of people would drop litter and food on the ground and the rest would put them in the garbage bin. It is hard to calculate accurately how many people would disobey the principle of keeping public space clean. According to the statistics from MTA, there are over 140 million people using NYC subways in August alone, the most recent ridership statistic available. It is estimated there will be over 150 million people using subway service every month until the end of this year.

People may complain about the dirtiness in the subway station, but there is still pride in a system that is more than a century old and runs 24 hours a day every day of the year. In fact, October 27 marked the 112th anniversary of the NYC subway system which opened in 1904. The strong sense of history is also an attraction for tourists in New York. Lotz said he really appreciated the beauty of the historical sense in the subway.

While the noise of trains wheels hitting the track, the unknown liquid on the ground and the hotness might be annoying, it is New York City.