Beyond a day of protest, Racism strains

Often overlooked yet an indisputable part of every social conflict and struggle is the psychological journey of individuals involved. Black American communities experience with racism and their long struggle for racial equality has been one that continues to receive immense attention as a movement but beyond the days of activism lies a difficult personal encounter and inner struggle against racism on a regular basis.

The existence of racism in American society is not a sudden occurrence, it is a product of a mindset shaped by decades of human enslavement, of white supremacy and generational gap in economic inequality in the aftermath of the abolition of slavery.

“Slavery was a horrific experience and it was a manifestation of a deadly mindset of Black inferiority and White supremacy. How it effect our behavior firmly establish black lives being devalued,” said Dr Cheryl Tawede Grills, a clinical psychologist and a national Past President of the Association of Black Psychologists. She has long been working with communities of color to bring attention and to provide assistance in dealing with racism induced stress and traumas. “In this age and time of a multi racial existence the fight for equality is even harder because we already work under the illusion that we are equal by law,” Dr. Grills continued.

In 2012, the fatal shooting of Trayvon Martin, a 17 year old African American, by George Zimmerman, a neighborhood watch volunteer in Florida, lead to a nationwide rally and discourse on racial profiling and police brutality that we are still in the midst in. Zimmerman was acquitted and social media responded with the hashtag Black Lives Matter. Trayvon Martin was only one such incident of the many that was to follow and throughout the struggle despite the fact that racism has made it to a choking point of ‘I can’t breath’, the Black collective experience of racism and fight for justice grew from the hashtag to a real movement on the streets. Police brutality has impacted Black psychology deeply.

“My son is one of the reason why I fight,” said Hawk Newsome, president of the Black Lives Matter Movement, greater New York, who is a single parent to an autistic son. “If police give him a command to hold his hands up he wouldn’t understand and he could get killed. For a white man something like this wouldn’t happen.” He added: “It hurts my heart to see my brothers and sisters get hurt and killed. Animals being killed receive more sympathy from white people than a black man being killed.” 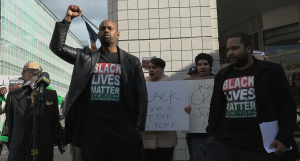 nter with racism does not limit to police brutality but it is existent in work places, in schools, and even when driving a car. ‘There are a good number of Black people who get stopped driving a good car. Most stories from clients are where police has over stepped the boundaries and invariable the victim is a person of color,” said Edward D. McCarthy, supervising attorney, criminal defense practice, the Legal Aid Society.

Members of communities who have been facing racism have shown greater signs of stress in the form of low self confidence, lack of trust for the system, increased alcohol consumption, etc. Although the American Psychiatric Association’s Diagnostic and Statistical Manual of Mental Disorders (D.S.M.) has not formally recognized racial traumas as a legitimate disorder, the need for more scientific research to understand the issue has been a concern for many psychologists. Currently there aren’t any government initiated services that gives special attention to the issue or provide specific services to such groups.

“As a black man you are expected to be strong and within the black community psychological therapy is considered taboo and culturally unacceptable but as we deal with trauma I feel we should have programs that help us deal with stress,” said Newsome.

Indeed, racism induced mental pain and traumas is not limited to a certain age group and it’s effect stretches to members from all walks of life. “It is only with great difficulty that I face these traumas,” said Victor E. Bryant, a criminal defense lawyer in the Bronx, who was a witness and a participant in the civil rights movement. “The experience of racism in effect becomes embodied in stress and it impacts physical and emotional health and happiness.”