Brooklyn Pigeons – A Fight for Flight 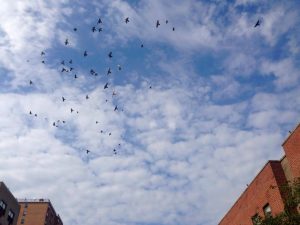 A group of young girls aged 6 to 15 walk into the back of Broadway Pigeons and Pets Supplies in Bushwick. This is one of the few pigeon shops left in New York. Shop owner Joe Scott asks the girls if they like pigeons. The girls shake their heads and ask to see the lovebirds in the opposite cages.

But this hasn’t kept pigeon flyers like Kenny King from building a strong bond to the birds. King is one of Scott’s regulars. Now 55 years old, King started flying pigeons as a young boy in Brownsville with Mike Tyson, former heavy weight boxing champion of the world who has been vocal about his love for flying pigeons. To King, flying pigeons was a way to forget the poverty and the tensions he lived with at home. Spending time with the birds even helped King fight alcohol and drug abuse.

“It becomes therapeutic,” King explains. “If you have any kind of problem, you go up to the roof for 4 or 5 hours and sit there. That’s it.”

King, just like Tyson, is still flying pigeons to this day. But the gentrification of Brooklyn and a growing dislike of pigeons are posing a threat to the destiny of these birds.

Pigeon flying came to life when Italian immigrants brought their own pigeons to New York in the 1950s, according to Colin Jerolmack, Professor of Sociology at NYU and author of the book, The Global Pigeon. Jerolmack explains that they would watch the birds take off for a few hours before they flew back to their coops. The birds are identified by a small bracelet and the flyers used to try to catch each other’s pigeon as a sort of informal competition.

Although pigeon flying used to be a working class white immigrant pastime, says Jerolmack, as neighborhoods diversified people of different ethnic backgrounds became experts in the art. In places like Bushwick, Black and Latin American children helped the older Italian residents take care of their birds. “There were a lot of racial conflicts in the Bushwick area but in the midst of all this, this is a sort of interesting and hopeful story,” says Jerolmack. To this day Scott’s store gets costumers from various different ethnic backgrounds. “We get all kinds of people,” Scott says.

But Jerolmack has seen a steep decline in pigeon flyers over the last ten years, during which a young, primarily white wealthier population has been moving into Brooklyn. Jerolmack estimates that the number has halved, leaving approximately 150 pigeon flyers remaining in New York. This is partly because new neighbors call 311 or complain to their landlords about the pigeons on their roofs. “I know guys who never had inspections before 2000 and then have had several in a year,” says Jerolmack. These inspections often lead to evictions as the coops very rarely meet fire safety norms. Moreover, a large number of these coops have been installed on top of abandoned factories or warehouses, which are being taken over by building owners who have no interest in keeping the pigeons.

“You can’t disconnect how people feel about these pigeons to how they feel about street pigeons – which generally, they don’t feel great about,” Jerolmack says. The concern for pigeon related illnesses in the last decade has prompted a general apprehension about the birds, which Jerolmack sees as a misconception. While common pigeon feeding areas are being replaced with “No Feeding The Pigeons” signs, Jerolmack insists that there has been no real documentation of people getting diseases from being in contact to street pigeons. 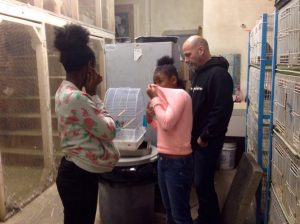 Young girls cover their noses from the smell of the pigeon coops at Scott’s shop.

This hasn’t stopped people’s uneasiness about the birds. New York State Senate Simcha Felder (representing the 17th district) illustrated this general concern vis-à-vis New York pigeons as he suggested to curb the city’s pigeon population in a report written back in 2007 when he was on the City Council. He claimed: “The uncontrolled pigeon population in New York City poses a threat to public health.” However, in the same report Felder admits that “cases of civilians contracting diseases from pigeons or pigeon droppings are rare and the threat is often exaggerated.”

Although Jerolmack acknowledges the possibility of birds locked up in an enclosed space being more prone to developing bacteria and diseases, he argues that this isn’t relevant to pigeon flyers in New York. “People move in not knowing that these guys take good care of the birds and vaccinate them, which people who have been in the neighborhood know,” Jerolmack says. 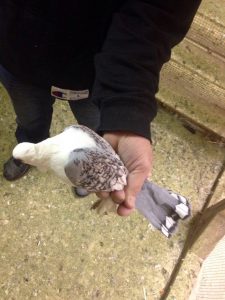 Scott holds one of the pigeons for sale at Broadway Pigeons and Pet Supplies.

Nelson Plaza certainly cares for his birds. Every week, he comes to Broadway Pigeons and Pets Supplies to buy about eight $25 bags of feed for his pigeons. This is just part of the budget: Plaza vaccinates his pigeons every year and gives them vitamins daily. When one of the birds gets sick, he has to spend around $45 on medication. Unlike King, Plaza doesn’t face the risk of having to cover roof damage charges (which, according King, can cost up to $1000 in the case of a snowstorm). He still has to fly the pigeons and clean their coop daily. “It’s a lot of responsibility,” Plaza admits.

But attentive care isn’t enough to ensure the flight of his pigeons. Although Plaza flies the birds from his garden in Crown Heights, the changing landscape of Brooklyn still represents a challenge to his coop. “Right now they are putting a six story building behind me. The birds are going to have a hard time navigating in my borough: they will have to go above the building. People are going to complain about the birds and they will send the health inspector,” Plaza fears, “One day they are going to say: ‘No pigeons in New York City, period.’”