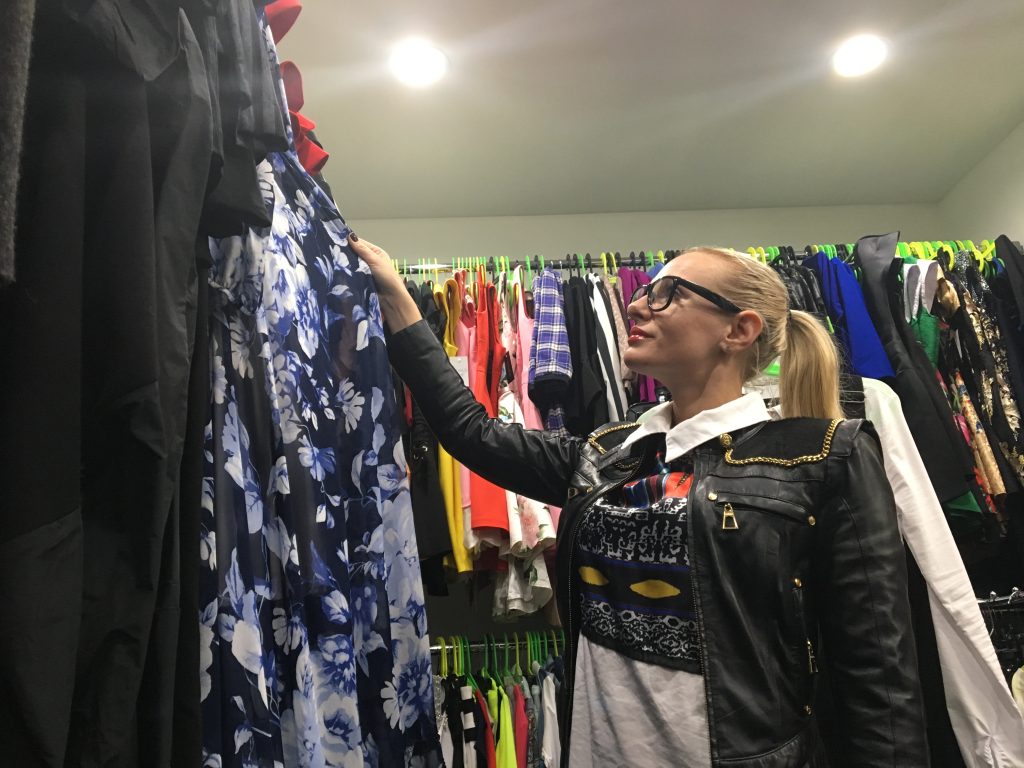 Yuliya Kalashnikov in her store, Impulse

At 29, Yuliya Kalashnikov is the youngest fashion store owner in Brighton Beach.

In an area with a large senior population, selling brightly colored clothes for young people might not be the most obvious business idea. But for Kalashnikov, it’s working.

“It’s my fourth year in this business. Nobody else here is selling clothes to the young. And I am doing better and better,” she says, pretending to spit three times over her left shoulder, which is a Russian custom against the evil eye.

The key to success of her store, Impulse, are troves of new Russian-speaking immigrants bitterly dissatisfied with American mass market.

“From what I see, Americans simply don’t have any taste in clothes,” Alexandra Zubareva, one of the customers, said while checking out jeans excessively embroidered with black beads. “They put on a sack, and they like it. Even at expensive brand stores, something can cost a thousand dollars, but you look at it and think, ‘Honestly, a homeless person could wear that.’” 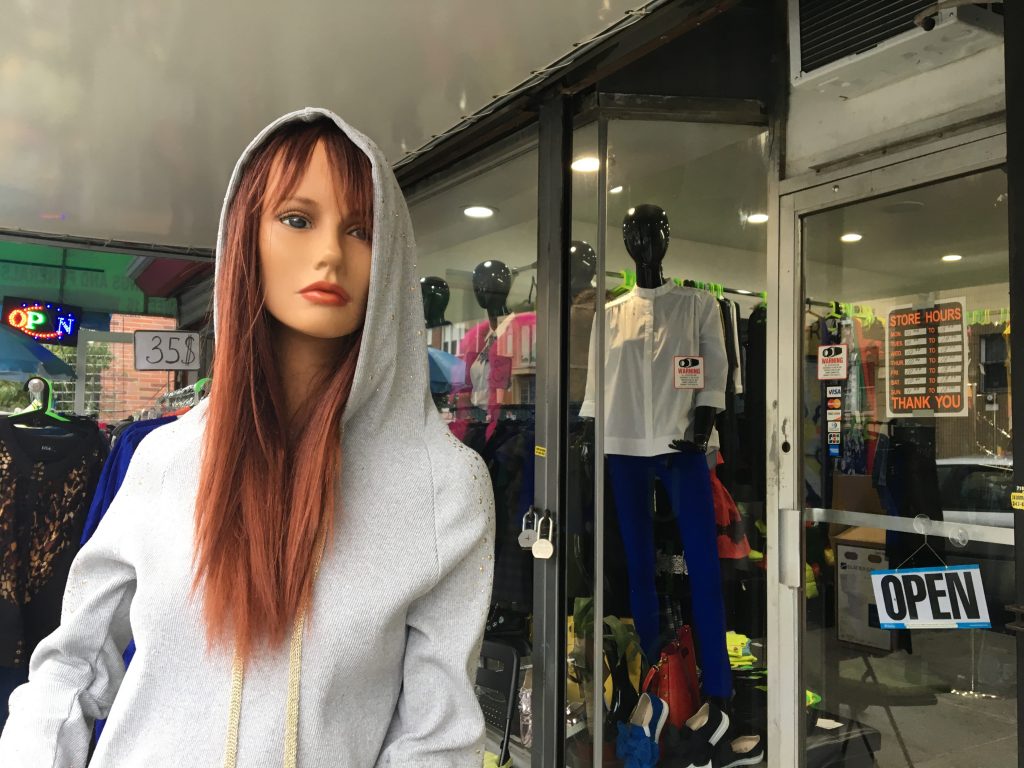 For many in Brighton Beach, Americans’ laid-back and practical style seems like underdressing. Fashion stores in the area have always been catering to the style that is distinctly un-American, business owners agree.

The assortment of clothes in the neighborhood’s stores “screams furs, prints,  ruffled trims and elaborate costume jewelry,” as opposed to “ripped denim jeans, athletic-wear and chokers” one can find in other areas, says fashion designer Stella Kenigstain, who grew up in Brighton Beach.

But in recent years, there has been a shift in the origin of imported goods. Businesses that have been selling clothes from France and Italy for years now find it hard to keep up with those like Impulse, selling cheaper items from Turkey.

A store with a telling name Paris Moda, just a few blocks away, has been in business since the early 2000s.

“People in Brighton Beach really like to dress up,” Zina Aga, the store’s manager, said. “Quite many even overdo it. You look at them and think, ‘Oh my God, how could they go outside like that?” She added: “Recently, I saw a woman – turquoise earrings, turquoise dress, turquoise shoes, holding a turquoise purse in a hand with a turquoise bracelet. I think that was too much.” 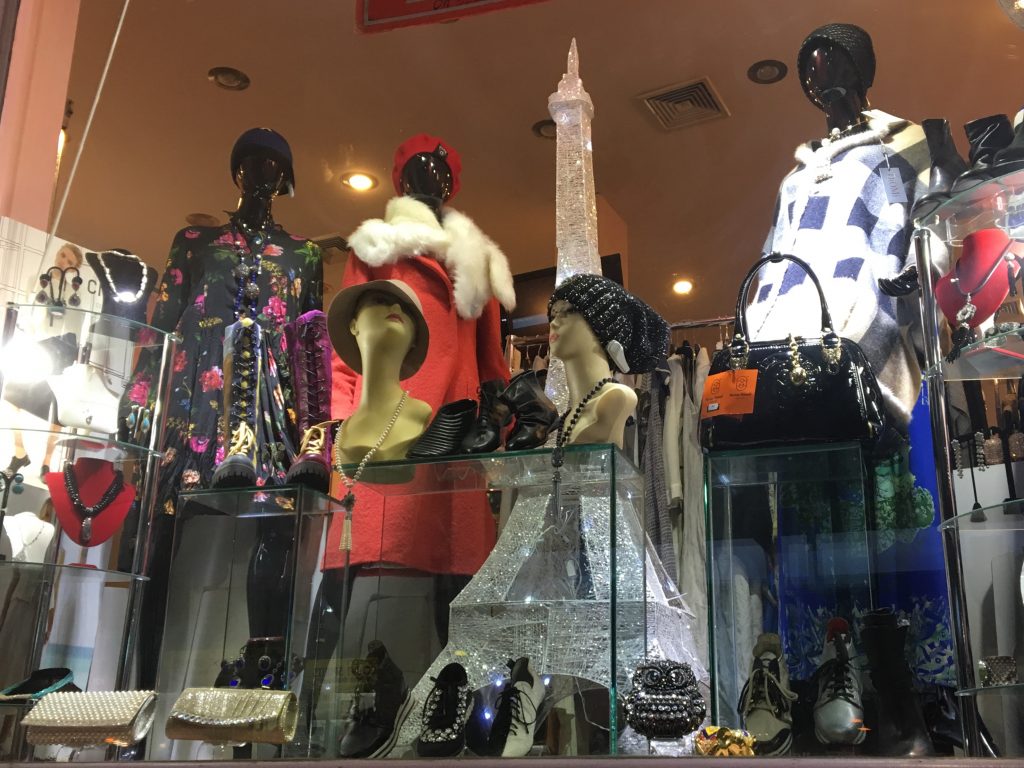 Paris Moda store has been in business since the 2000s

Kenigstain agrees, “Russian women are generally very fashionable and put together, some would say ‘showy’.  In Brighton Beach, women are dressed up just to buy milk. My mother always told me always look your best even if you are going to the store, as ‘you never know.'”

Brighton Beach’s love for glamour was even documented in a reality TV series Russian Dolls which aired on Lifetime in 2011. The short lived show was criticized for upholding every possible stereotype about Russian women.

Although the TV series portrayed lives of the richest few, Brighton Beach, in general, did experience a spike in wealth in the 80s. Back when Paris Moda opened, Russian-speaking immigrants in the area were richer and wouldn’t settle for anything that wasn’t made in France or Italy, Aga said.

But those golden days are now gone. Loyal customers – middle-aged, Russian-speaking locals, many of whom live nearby in the luxury condo complex Oceana — are keeping Paris Moda afloat, but the store doesn’t get any new clients.

“There used to be a lot of people who would come to Brighton Beach from somewhere else. Now it seems those people have disappeared,” Aga said. “Our sales are now lower. I’d say, by 50% in the last three years.” 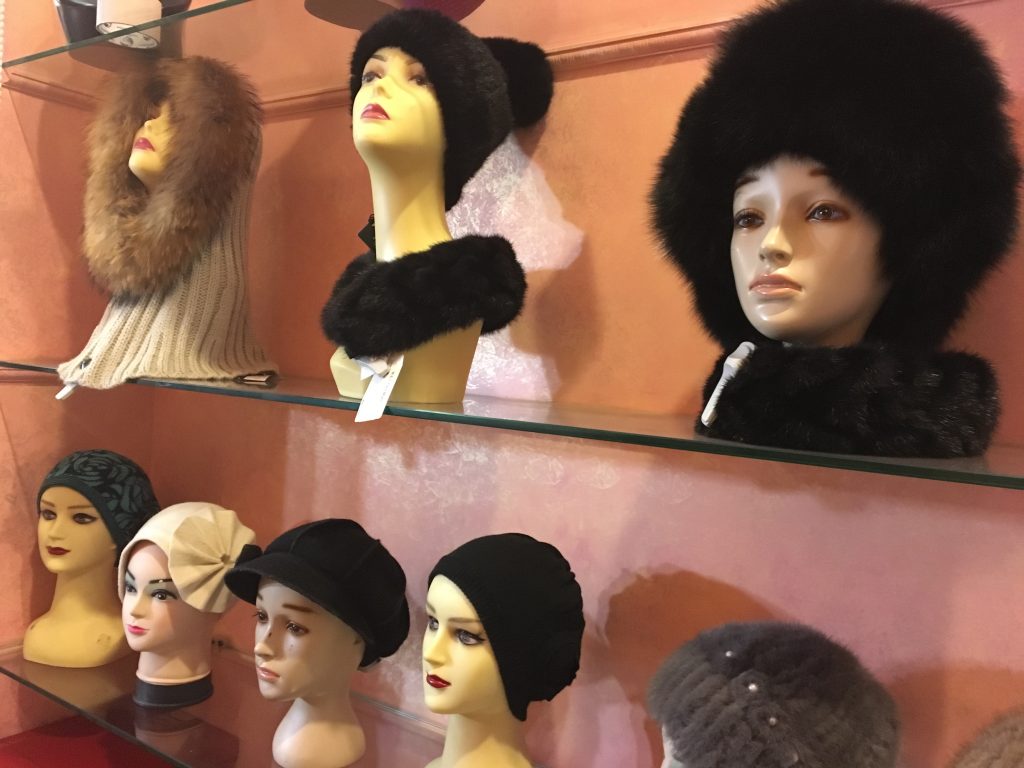 The closing of the famous M&I International grocery store that was just across the street might have been a factor, Aga speculates. That store was a huge attraction spot in the neighborhood – both for Americans wanting to buy caviar and Russians nostalgic for buckwheat and rye bread.

But this is not the only reason. Brighton Beach has an aging population, and with rent prices going up, residents have become poorer, and their purchasing power decreased.

“Don’t forget: a lot of people who were buying European clothes 15-20 years ago no longer need it due to natural reasons, I’ll put it like this. They are now in the better world. There is no one to sell this clothes to,” points out Yelena Makhnin from the Brighton Beach Business Improvement District. 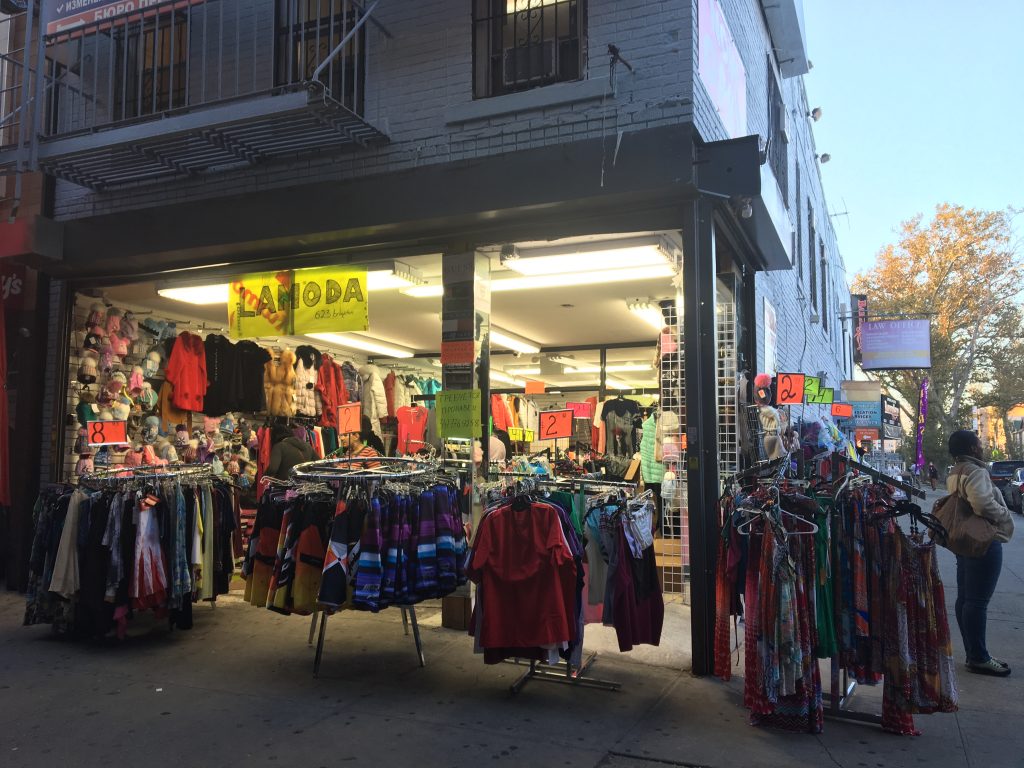 Stores with racks on the sidewalk are selling very cheap clothes

There has also been a shift in the ethnic and economic background of people in the area. Pakistanis and Central Asians are opening up stores on Brighton Beach Avenue, where rent starts at $8,000, selling cheap stock clothes for as little as $2 an item.

“Rent rates started to grow many years ago after corporate businesses moved in. Small amounts of goods imported by little boutiques don’t allow them to have big discounts,” Makhnin said.

From Russia With Clothes

While for shops like Paris Moda the opening of cheaper stores in the area is a worrying trend Impulse’s Kalashnikov recognizes that times have changed. She believes not many people today would buy a dress for $700 just because it was made in Italy.

“We try to support people who have just arrived by making our prices more affordable, similar to those in Russia so that it wouldn’t hit the pocket,” she explained, adding that, on average, dresses in her store cost $135. 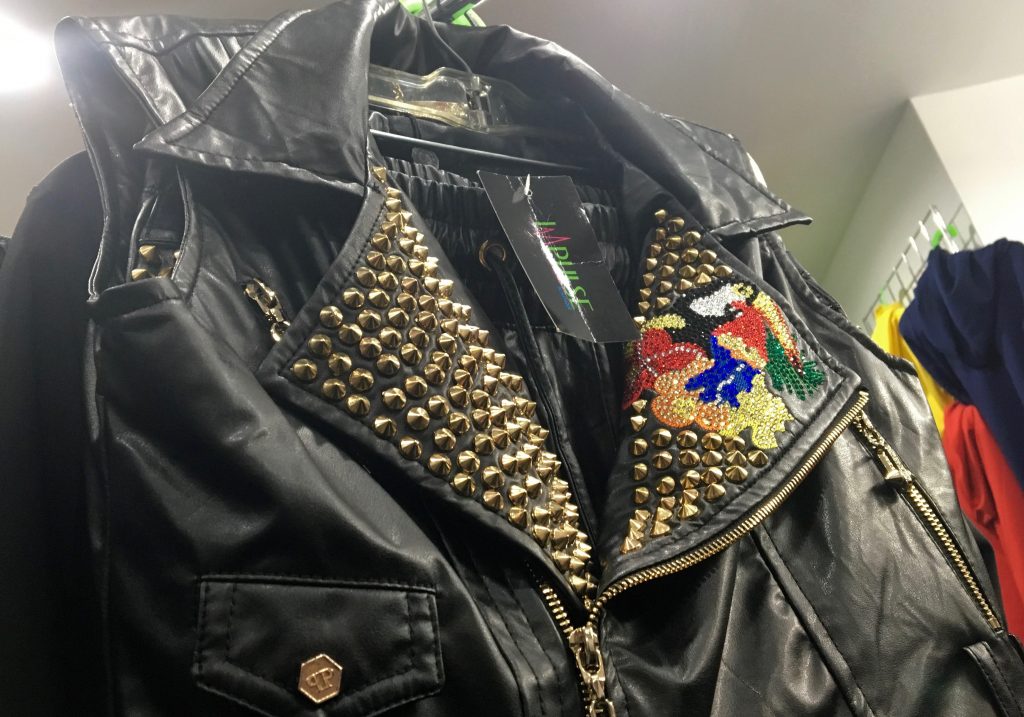 Clothes sold at the Impulse store often has bright decorations

Kalashnikov, a Minsk native, came to the U.S. at the age of 22 on the Work&Travel program. Seven years later, she is a U.S. citizen and owner of two businesses – she also has a beauty parlor.

The idea of selling clothes to the new arrivals derived from her own experience of living in New York. She got married and obtained a legal status in the country quite quickly given her the freedom to travel — and shop abroad. Many of her peers couldn’t do the same fearing they wouldn’t be let back into the country after overstaying their visas.

“I worked a beauty parlor, and my clients liked the way I dress. We all were on the J1 student visa. They were sitting here unable to leave, and when I would go to Russia or Belarus, they would ask me to bring something back for them as well,” she said. “It’s ridiculous, but we couldn’t find the clothes that we liked here.”

Nowadays Kalashnikov also looks for inspiration closer to home. She follows Moscow showrooms on social media and observes new trends whenever she goes back to Belarus and Russia. Customer Alexandra Zubareva called Impulse “a good place to shop, if you haven’t yet adjusted to the American style.”

Impulse is targeting new Russian-speaking immigrants who are not limited to Brighton Beach. In terms of selling clothes for the young, it doesn’t have any competition in the area. Many customers come from Manhattan, and some from other cities ordering clothes that Kalashnikov advertises in social networks online.

On a recent Friday several customers came in, inquiring in Russian about items that Kalashnikov advertised on social networks. When Kalashnikov told people that the shipment would arrive next week, many of the women stayed to try on clothes already in the store. One customer, Alexandra, complained about not being able to find glamorous clothes for pregnant women in mass market stores. Kalashnikov unexpectedly gave her one of the store’s leather dresses to try on.

But long time Brighton Beach locals, many of whom are older than Impulse’s target audience, are also coming in, said Kalashnikov. She introduced larger sizes specifically to serve this community. The older clientele are often the boldest in their fashion choices.

These fashionable seniors also shop at Paris Moda. “They don’t like dark colors; they want violet, blue, red. I’d say, 30% of our c  ustomers are babushkas who like everything bright, others prefer classics,” Aga said.

It is very typical of women from the former Soviet Union to economize on necessities to buy better clothes, shop owners admit. “Our women would skip meals, but dress well. We simply have that in us,” Aga said. “People here dress smart even when they are just taking away the garbage.”