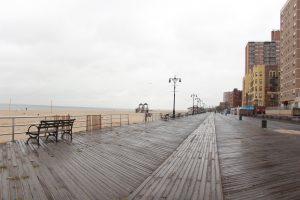 “What number is this?” I ask to an old man on the threshold of a Russian fur store on Brighton Beach Avenue. He gets his left hand out of his pocket and shows me the number three with his wrinkled fingers. “Do you know this address?” I ask him showing a scrap of paper wet from the rain. He shakes his head suggesting a smile. He barely understands English, I don’t speak Russian at all. I’m about to leave when I hazard another question: “Do you remember Sandy, the hurricane?”. “Sandy?” he responds back. His eyes light up. “Here!” he exclaims showing me a mark left by the water, on the right leg of his desk. “Here is Sandy”.

It’s been nearly four years since the second most devastating hurricane of American history, after Katrina, in New Orleans. According to FEMA,  Sandy disrupted 14 miles of New York’s coastline. Across the East Coast, it damaged 650,000 households and over 300,000 businesses causing $65 billion in damages.

In Brighton Beach the memory of its ravages is still fresh and its legacy is always visible in the many small business of the neighborhood. Among the different communities who live here –Russians, Hispanics, Pakistani — Sandy is the only shared word. 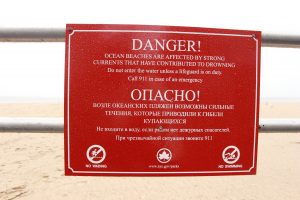 Ask Ignacio Cabrera, manager at Brighton Beach RX Pharmacy, if they managed to recover form the losses suffered after Sandy, and he takes a long sigh. “We lost about $110,000 of goods and machines,” he explains “and we had to pay about $4,500 to clean up the store and the basement from the sand drifts.” Like in most of the cases here in Brighton Beach, insurance didn’t cover the damages caused by the hurricane. “Today, after Sandy, it’s difficult to find an insurance that accept to include basements in their coverage,” Cabrera says “most of the shops on Brighton Beach Avenue don’t have one. People just avoid stocking their goods there.”

At the crossroads of Coney Island and Brighton Beach Avenue, on October 29 2012, the water reached 8 feet. “One day before, we had received our meat delivery,” recalls Maria Cantharero, Tacos el Rey owner. “Under water’s pressure the windows exploded and in no time we lost everything.” It took three days for Cantharero and her family to restart the business. “We had no electricity nor gas, so we sold sandwiches and cold plates,” she explains. “But today I’m still working to pay the damages caused by Sandy.” She had to ask for a loan from his son. “I still owe him $18,000” she counts on her fingers.

After Sandy, many small businesses in Brighton Beach survived with the support of families and friends. “No banks, no insurances” shop owner Human Butt says in broken English. Butt owns Anchal, a colorful store on Neptune Avenue that caters to the South Asian community. All the tissues and the jewelries that he imports from India and Pakistan were lost. His son along with some friends helped him to buy back the goods. “Little by little” he smiles when asked if he has reimbursed them.

On the waterfront, at Tatiana’s, everyone worked hard to reopen the famous restaurant of Brighton Beach, ravaged by the water. “But I don’t want to speak about Sandy,” exclaims the manager, who also refuses to give his name. “It’s still hurts” he adds, walking away.

Although small business owners are still struggling, real estate investors arrived after the storm and snatched up damaged property at cheap prices. “People were scared and they sold their apartments for half the price,” explains Viktoriya Proskwrnyak, employee at Brighton Beach association. Today, Real estate prices have risen more than 26% in the neighborhood with some waterfront condos selling for well over $1 million. “People who took advantage of the situation made it well, but the truth is that everyday, more than everyone else here, they have to deal with this fear…the fear that it might happen again.”