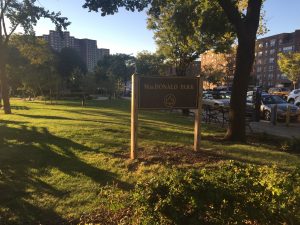 Next to the Forest Hills Jewish center is MacDonald Park located alongside Queens Boulevard. It is always a good place for local residents to go for a walk have a nice rest after a long week or bask in the warm sunshine.

That comfort is being shattered, however, as some residents charge that the park is becoming the neighborhood spot for public urination.

“It is pretty bad that someone is doing this in a public area,” said Steve Lichtenstein, a local resident of Forest Hills. He has been living here for almost 50 years. He said that Forest Hills was a beautiful and peaceful neighborhood to live. However, as time goes by, it has become more and more crowded and the public administration remains unchanged.

Joe Capraro usually sits on the bench in the park and talks to his friend. “A lot of people are aware of the problem here,” he said. His friend Steve Rothstevie added: “It happens a lot. Someone also wash their clothes in front of the water fountain, which is used for drinking. Someone literally uses this place as a bathroom. It is a long-term problem.”

Residents complained that no one is addressing the issue. Despite complaints from the community, the problem may not get better any time soon. This past spring Mayor Bill de Blasio signed the Criminal Justice Reform Act (CJRA) which included eight bills aimed at building stronger communities by reducing the penalties for low-level misbehavior such as public urination or littering. The move changed public urination from a criminal offense to a civil one, meaning instead of jail time offenders could be issued a summons.  “The police have so many things to deal with, surely peeing publicly is not their top issue,” said Lichtenstein.

Many residents blame the lack of resources for homeless people in the area which forces people to live in the park.  According to US Census Data, there are no homeless services in Forest Hills.

Peter Rywak, who was sitting in the park recently is a long time New York who admits witnessing people urinating in public a lot. Sometimes he sees a puddle of urine near the door of his walk-up apartment in Manhattan. However, he cautions against blaming public urination on a certain group of people.

“It is more of a human issue. For the homeless people, we have the local government and different organizations. For public urination, we have the police here. But this is a complicated problem,” he said. He said that though New York is an international metropolis, it does not provide public restrooms. “I think it relates to our quality of life. And it might help.”