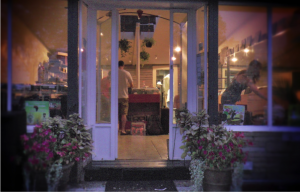 Hand-made wooden shelves and lush indoor plants hanging down the ceiling make this little vinyl shop, located in Red Hook, Brooklyn, as comfy as an old friend’s house. Exotic music with beating rhythms takes you to a far-off village somewhere in Africa. You can almost see native musicians with drums between their legs playing under the sun. Music lover or not, you will like this record shop.

“I am giving a gift to the neighborhood, ” Bene Coopersmith, owner of the first vinyl shop in Red Hook, said while he was organizing records. “This neighborhood is on the edge of getting developed. You can see a lot of construction here.” Recreation centers are being built; fancy restaurants are opening. Coopersmith figured there is no point adding one more restaurant or coffee shop to the community.

“There is no single restaurant in this neighborhood where you can spent less than $20 to have a fancy meal. But you can get a fancy record here with a few bucks, or nothing — just come in here and enjoy the music,” said Coopersmith.

Coopersmith picked out a few records from one shelf and distributed them to others. Each record seems to be an old friend of his. He knows them too well. Is it a R&B? Is it a Soul? Only a glimpse of the cover does he need to know exactly which genre it belongs. “When I finally opened this record store, the community gave me a lot of support,” he said. “People came here to help cleaning old records. For two days, they stayed overnight and pitched in.”

Kate Mattison, a young musician and piano teacher in Red Hook, said: “I’ve been pushing him to open this shop for a long time. He has an incredible collection. Why not share them?”

Coopersmith and Mattison have been in a relationship for five years. They met at a bar. He loves beer; she was a bartender; they both love music. It was perfect. This July, Mattison said to  Coopersmith: “Now is the time, you gotta do it!”

“It’s a small community in Red Hook, but it is also strong,” said Mattison. By her feet, sat a 2-month-old white pit bull with brown spots. “This is Columbo, a.k.a., Bobo. The guy used to own him came all the way from Buffalo, NY, to live here in Red Hook.” She added: “It’s a good neighborhood.”

People stop by the shop and say hi. They stand outside the door, swinging with the music. The shop brings people close. “I used to live in Minnesota, but I moved to Red Hook long ago,” said West Dylan Thordson, a composer, whose most famous works are on the soundtrack for the 2014 movie Foxcatcher. “I’ve been in the music industry for ten years, and it always bothered me that there was no vinyl store near where I live,”

Now that the community finally has its own vinyl shop, its future might not be smooth.

“A real community is where people can afford to work and live,” said Coopersmith. “They can go out to drink in a local shop and enjoy life. But development can split out this community.”

Last September, a vinyl shop in Greenpoint lost its lease, thus ending a 7-year relationship with the community. In 2005, New York City Department of City Planning launched a rezoning plan in Greenpoint, which directly led to leaping developments in the neighborhood.

“In the past ten years, rents have tripled,” said Emily Hunter, a broker from Brooklyn. “In neighborhoods like Dumbo or Greenpoint rents of storefronts have risen to $70 per foot, which a lot of small businesses can never afford. Years ago, a bakery store in Dumbo has to move to Red Hook because the rents there were only $25 per foot.”

Red Hook used to be an outlier among all the other booming waterfront communities in Brooklyn, but not anymore. This year, the city council aims to develop Red Hook into a new commercial center that contains offices, retail space and performance venues. More bus lines and ferries will be added to Red Hook.

“Rents in Red Hook have skyrocketed in the past couple of years. The housing stock is very small and there are few vacancies. Landlords are charging rents that are astronomical because Red Hook is the new ‘hot area’,”said Nadir Aslam, a former resident in Red Hook there for a visit. “But the city council better develop this neighborhood. Especially after the Hurricane Sandy, a lot of properties were destroyed. Yes, rents will continue rising. But this is the city, things change. Roll with it.”

It’s a rocky future Coopersmith faces. At sunset, the shop closed. Coopersmith, leaning against a wall, lit up a smoke.

“Right now the rent is fair, but the store has to make some money before everything become pricier,” said Coopersmith. “Of course, more people will come and that’s good for business, still it’s a small population that buys records.”