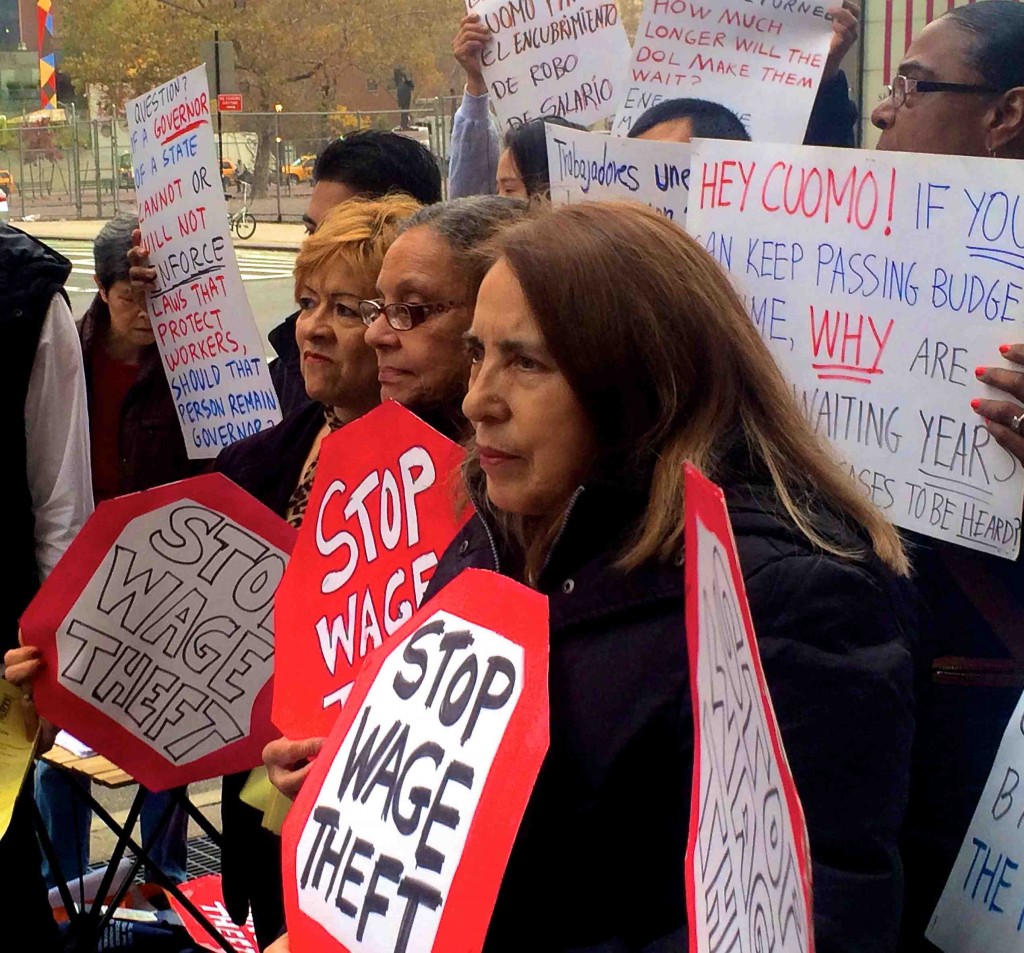 Rally to improve enforcement of wage laws outside the DOL

Volunteers, lawyers, and exploited workers gathered outside the Department of Labor (DOL) Wednesday morning to make their collective voices heard. Armed with posters and flyers, the group of almost 30 shed light on the need for change in the way the DOL handles labor cases. The National Mobilization Against SweatShops (NMASS) along with the National Center for Law and Economic Justice (NCLEJ) are combining forces to tackle the issue of “stolen wages” in New York State.

“Some of these cases have been open for six years,” said Paul Ahn, a volunteer member at NMASS, “people will only get a fraction of their money back.”

Simply put, stolen wages or wage theft is when workers are not paid what they are contractually promised. While wage theft is a national issue it is one particularly prevalent in population dense New York City. The National Employment Law Project (NELP) released a study in 2010 stating that workers in low-wage industries in NYC lose over $18 million a year to wage theft. Data like this as well as the stories from exploited workers like the ones gathered at the event have led organizations like NMASS and NCLEJ to take up this cause. Both organizations have been in support of the Securing Wages Earned Against Theft (SWEAT) Coalition who are the main force in introducing NY State Bill 6658, also called the SWEAT Bill. This bill aims to put more power into workers hands, allowing a judge to freeze employer assets if they determine a worker has fallen victim to wage theft.

“This is a relatively new issue for us,” said Christine Ricardo, a post-graduate fellow at NCLEJ, “but it’s one that’s very much in our spectrum.”

The spectrum Mrs. Ricardo is referring to is the NCLEJ’s tendency to influence state and company policies for exploited workers. She explained that the organization typically helps with litigation as well as new policy advocacy and education on existing policies. Typically the NCLEJ has dealt with issues like proper disabilities screenings and correct implementation of the government benefit system.

The issue of wage theft is one of the first times the organization is helping to push state legislature. Items like Bill 6658, are not typical of the NCLEJ but the organization is familiar to using various methods to impact working communities. “This isn’t necessarily a new tactic for us but it’s best to use a multipronged attack,” said Laura Redman, a Staff Attorney at NCLEJ, “you have to use all your resources.”

The organizations involved were trying hard to get the Bill introduced for vote on the recent ballots but were unable to get it past the judiciary floor. Supporters of the bill know they will face a new set of difficulties with the recent shift to a Republican majority Senate.

“We tried to introduce the SWEAT Bill in the last session,” said Leah Lotto, a Dodyk Fellow and Staff Attorney at NCLEJ, “we will reintroduce it in the next session and hope it passes.”