LGBT Seniors: The Fight Between Better Living and Aging

After seven more states won same-sex marriage rights this month, the lesbian, gay, bisexual and transgender (LGBT) community expressed their excitements and congratulations on organization websites and personal blogs. But there is not much time for celebrating, because the LGBT community has more issues to work on beyond the marriage rights, like problems in senior housing.

“Our generation has gone through a lot,” said Perry Brass, 67, who came out at a very young age during the 1960s. “The last thing I want is to live [my retirement]with a neighbor who holds a Bible and hates us for who we are. It is horrible.”

A LGBT pioneer since college, Brass has participated in many gay rights movements and witnessed changes during the decades. Brass married his husband, Hugh Young, after New York State legalized gay marriage in 2011; and they have been together for 34 years. Brass said he never thought his right to marry would come during his lifetime and “it is like a dream” to enjoy their lives together with more benefits, securities, as well as responsibilities as a legal couple. But as much as he cherishes being a married man, as he approaches 70 he has been thinking more about how the couple’s quality of living can be improved as they age together.

“I wish to stay in my apartment for ten more years, but it is hard,” Brass said. 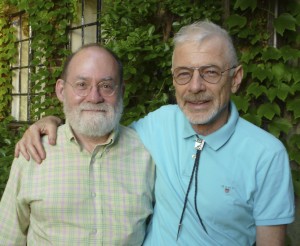 According to a recent report from Services & Advocacy for Gay, Lesbian, Bisexual and Transgender Elders (SAGE), a New York City based national LGBT seniors organization, LGBT seniors struggle to find safe and affordable housing, whether buying or renting a home, or residing in aging and long-term care centers. The report shows that one in eight LGBT seniors reported being discriminated against when searching for housing; one in four transgender seniors reports faced housing discrimination because of sexual orientation and identity.

“We see people experienced discrimination when they try to encounter landlord, building owners who are homophobia. Some folks even have to go back in the closet because of harassment from fellow residences,” said Robert Espinoza, Senior Director for Public Policy and Communications for SAGE.

According to Espinoza, some LGBT seniors came out during a very difficult time in the 1960s and 1970s and as a result were cut-off from their family and have no connection since. As seniors they live isolated without families and they have few resources and no effective support network. The report from SAGE also shows high concerns from LGBT seniors about aging and retirement with regard to personal finances, remaining independent, and loneliness.

Based on an estimate from UCLA’s Williams Institute on Sexual Orientation and the Law, there are at least 1.5 million LGBT seniors who are 65 and older in the U.S., and the population will double by the year 2030 because of the baby boom generation.

“The demographic is shifting; we must meet people’s needs. LBGT Seniors are kind of invisible for discussion; people don’t understand what it means to be a LBGT senior. We are constantly thinking how do we better protect them, and educating the public,” Espinoza said. 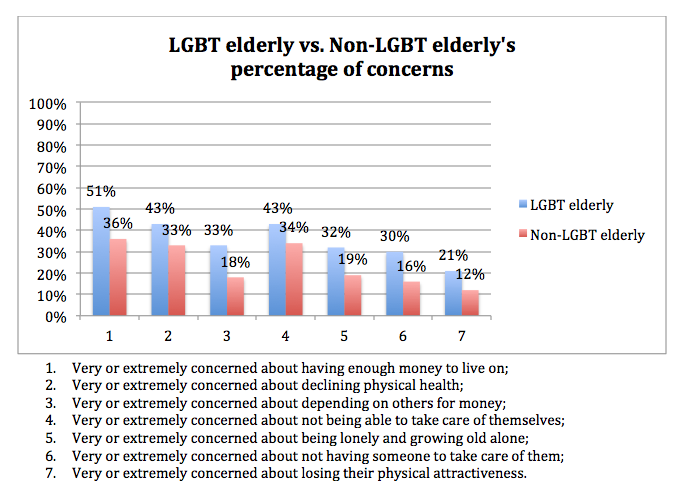 Data from SAGE’s report: Out and Visible: The Experiences and Attitudes of Lesbian, Gay, Bisexual and Transgender Older Adults, Ages 45-75

In addition to providing resources to LGBT seniors, SAGE also offers trainings in the New York City area to service providers to be more sensitive to LGBT residents. The training program has trained 5,000 service providers since 2012, according to Espinoza.

“The effort needed is enormous, and it will take place gradually. We want to make sure people have homes, have a safe place to stay and to call it home at the end,” Espinoza said.

Efforts to improve LGBT seniors’ living is also taking place in other cities. A LBGT friendly six-story apartment building was recently opened in Philadelphia, and has become a national model. Mark Segal, 63, an early gay activist, is the initiator of the housing project. Segal said LGBT seniors rely on the community, and he wants to build the home they need.

But starting the project wasn’t easy. People had doubts and didn’t care about the project at first, according to Segal. He did studies to show people why it is important, and found established models from other communities. After years of fighting, the project finally went though as a part of a campaign by the federal government to address issues in housing discrimination based on sexual orientation.

“It is no different than any other community. People when they age wish to be with like-minded people. That is why there are senior housing for mostly catholic, some for Jewish, and others for African Americans. Why should there not be one for LGBT’s,” Segal said.

The LGBT friendly building in Philadelphia has created a spotlight on the LGBT seniors’ housing issue and many cities are now in the process of building LGBT friendly housing, including Chicago, Los Anglos, and New York City, according to Mark Segal. Espinoza confirmed this information and said SAGE is actively involved in the project in New York City. The project is still at the very initial stage and no detailed information has been revealed, but he said SAGE is committed to make sure the project will be built.

Brass said he has heard the project about building LGBT friendly housing from a friend. Although he understands the project may take years to be completed, he believes it is a great thing for him and the community.

“I think that Hugh and I would be more comfortable in this kind of housing, since not having other gay and lesbian friends around us would be difficult,” said Brass, referring to his husband. We’d feel cut-off from the culture that we both know and like. Because for most of my life, the support I have felt from other gay men has been very important to me.”