New York – Sure We Can, the only licensed, homeless-friendly can collection center in New York, now faces the problem of being asked by its landlord to spend millions to buy the factory in which it operates, or face eviction.

Since October 11, 2013, when the Rheingold Rezoning Plan was first carried out, Bushwick landowners tried to rezone their property to maximize the profits. The rezoning affected a 6-block area of Bushwick, which transformed the manufacturing district into a residential and commercial neighborhood with additional streets, retail stores and 977 apartment units. The Rheingold Plan has opened the doors for Bushwick landowners and other developers, giving them the confidence to pursue more rezoning in the future. It also brings more worries to Bushwick residents.

“I don’t know what the landowner wants to do with the current place,” said Ana De Louc, canner and co-founder of Sure We Can, a Nonprofit Organization based in Bushwick, which welcomes New York’s homeless, who exchange cans for cash. De Louc considers her organization as a way to provide opportunity and give back to those less fortunate. 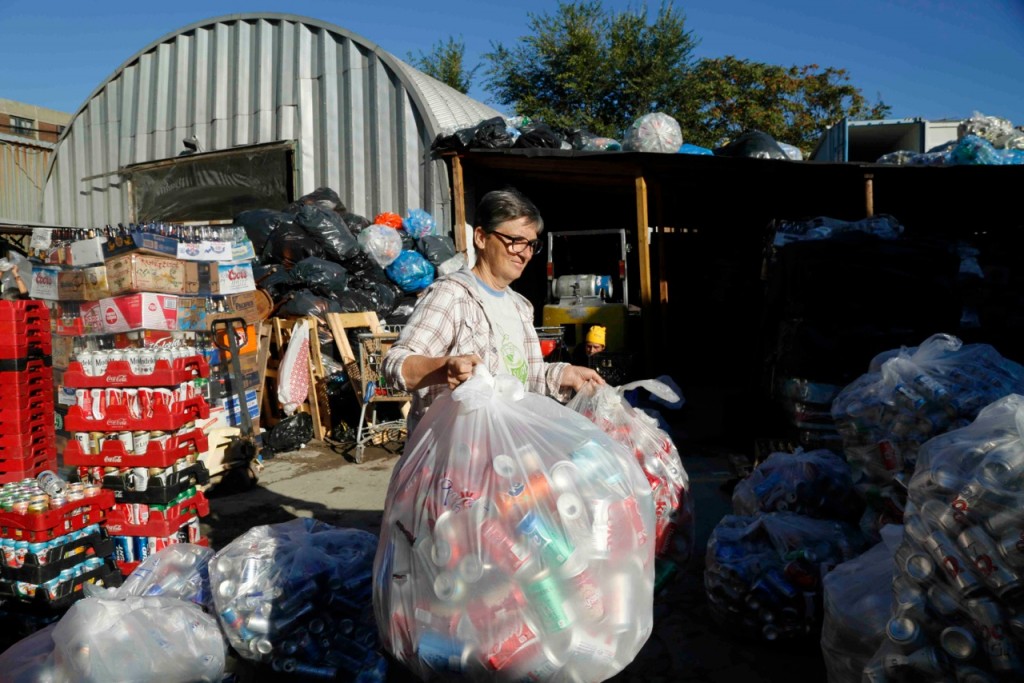 Ana De Louc collects cans at Sure We Can in the morning of Sept 27th, 2014. Photo by Wen Xin

“Small landlords don’t have as many rights as large companies, so that’s part of the reason why they have to take the initiative to make profits, even to the detriment of the neighbors, rather than protecting their rights,” said Matthew Mottel, a member of North West Bushwick Community, an organization dedicated to protecting the neighborhood from the rezoning policy. “The landlords want to rezone the manufacturing district into a residential district for the purpose of making more money from the rents.”

Rising housing prices mean more landowners stand to make huge profits. Under these circumstances, more and more tenants are being pushed out by landlords in Bushwick. Tamara Slogosky, community liaison for Bushwick Senator Martin Dilan addressed the problem during an information session for displaced Bushwick residents.

“Once there were 5 people running into the Senator’s office terrified that they were almost losing their houses. They were frightened because landowners wanted to sell the house at a much higher price and pushed out residents due to unaffordability,” Slogosky said. The huge profits landowners can make by selling their property is infringing on the rights of residents and the hurting the community, according to the information session attendees.

But according to Slogosky, there is an alternative for organizations like Sure We Can. “It could take property as community use,” suggested Slogosky. “Thus, the purpose of using the land is for the community and the price will be much cheaper than it would be for individual use.”

This would require that Sure We Can convince the landlord that designating the property for community use would be more beneficial than the profits he would gain from selling, or getting a higher paying commercial tenant.

“It’s difficult for Sure We Can to find an available price to buy the property. It will be much better if the landowner is in the community, and knows the land is for community use, so it will be more understandable for landowners to provide a reasonable price,” said Gabriela Rendon, an urban planner and adjunct professor at the graduate program in Design and Urban Ecologies at Parsons. She is currently coordinating with the Bushwick community to find vacant properties in the area to combat displacement and provide more residents opportunities.

Meanwhile, De Louc is fighting to stay in her current building. After moving four times since Sure We Can opened in 2005, she finally landed in her dream location. “It’s an ideal place for us to stay,” said De Louc. “For canners, we need a large warehouse with lights and shades to work with when collecting cans.” The 13,000 square-foot warehouse provides enough space for canners to select and classify 150,000 cans every day.

Driven by constantly rising real estate prices, more and more landlords in Bushwick are trying every means possible to sell their properties at maximum cost. At the same time, Bushwick residents have been promoting their own rezoning plan to protect their rights. According to DNAinfo New York, the Department of City Planning will take the grassroot rezoning ideas into account.

Tags: Bushwick Community, Grassroot Rezoning, Housing, Sure We Can