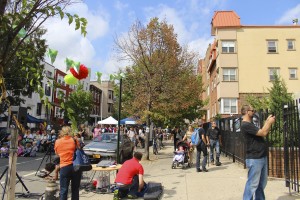 While many neighborhoods across the city transform, shedding old communities and gaining new ones, the changes going on in Greenpoint has caught interest from overseas: Poland.

Greenpoint, which has historically had a large Polish population is currently experiencing gentrification and development on a large scale.   The percent of vacant housing units for rent increased by sixty-two percent between 2010 and 2012, and the percent of vacant housing units for sale went up by over a thousand percent, meaning that a very large number of residents are leaving the area. The turnover has created concerns for residents, who fear loss of unity and increasing costs of living. In addition, the long-standing Polish population has increasingly dwindled according to longtime residents, as people move to cheaper neighborhoods such as Ridgewood.

“[I] started volunteering in the library and the other volunteers were saying that Greenpoint is changing, lots of people have to move out, the rents are high and new people are coming,” says Marta Pawlaczek, who moved to Greenpoint from Warsaw, Poland in 2013. Pawlaczek, who is Vice President of the Culture Shock Foundation, a non-profit organization based back in Warsaw that works to preserve and spread Polish culture, saw an opportunity to extend Culture Shock to the United States.

Pawlaczek created the “Greenpoint. The Transition” program, to unite the increasingly gentrified area of Brooklyn. “It was just an opportunity to do something, to introduce Polish culture to the new incomings, and to create an organization for the Polish people who are still here.”

The program aims to raise awareness about Polish culture in the non-Polish community in Greenpoint, and to foster community between older communities (Polish and non-Polish) and newcomers to the neighborhood. The “Greenpoint. The Transition” program is funded by the Polish Ministry of Foreign Affairs to help ease the transition for new Polish immigrants. The Culture Shock Foundation supports Polish culture on a local basis, although “Greenpoint. The Transition” is their first initiative outside of Poland. The program, which runs from May to December of 2014, includes Polish- and English-language movies, photography and writing workshops, board game events, and other events aimed at sharing Polish culture with the entire Greenpoint community.

So far ‘Greenpoint. The Transition’ efforts to raise awareness and build community seems to be working. “I didn’t know there was this Polish community here,” admitted Hannah Becker, who attended the event. “I definitely think events like this will help unite the community here, and bridge the gap between the older groups and new people”.