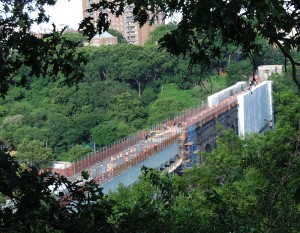 Construction on the High Bridge is nearing completion

HIGHBRIDGE – Columns shrouded in white tarps tower high above the Harlem River as construction continues on the High Bridge. The men and women in hard hats are hard at work giving this 160 year old structure a much needed facelift. Once a major part of the Old Croton Aqueduct system the bridge no longer carries water over its Roman style arches. High bridge, which has been closed for over 40 years, will soon reopen as a pedestrian walkway linking Manhattan to the Bronx.

This 1400 foot structure is in the final stages of a $61 million renovation that began in late 2012. The New York City Department of Design and Construction has partnered with the Parks and Recreation Department to bring this architectural marvel back to life. The goal is for residents on both sides of the river to benefit from having a walkway devoid of cars linking the neighborhoods, improving and adding to New York’s Greenway. The bridge will provide easier access to parks and waterfront for both communities as well, vital resources to these traditionally low-income areas.

With all of the clear signs of construction and progress you would think members of the local communities would be excited about their new walkway. But often there is a different reaction, “I don’t know anything about that,” said Pedro Torres, a residential co-op owner in the nearby Highbridge neighborhood. Other residents on both sides of the bridge share this general sentiment. A majority of the residents had little to no knowledge of the bridge or purpose of the construction, including the owner of the gas station right under the bridge. Those who do know about the project are largely unaware of the project’s December opening, some saying they think it will be completed in 2016. The only means of gathering this information by residents is from the signs posted at the gates blocking the bridge. Walking around the community, there is no evidence or advertisements of this new, safe linkage soon to exist between Manhattan and the Bronx.

“They were involved in the initial planning stages, they wanted benches to be put in and viewing areas so we included them in the design phase,” said Craig Chin from the Public Affairs Department at the NYC Department of Design and Construction speaking of the High Bridge Coalition. Chin said that after these initial meetings, which happened in 2010, the Department has not had any further contact with community groups.

The Harlem River Working Group and High Bridge Coalition have been working in partnership on this greenway project as well as several others in the area. A visit to the HRWG website, will bring you information about the organization as well as some old links from the beginning of the project in 2012. It also advertises dates for the annual Harlem River Celebration, held the first week of October, with times still to be announced. An email contact, that is inactive, is provided for questions as well as a Facebook page. A phone number is provided on the Facebook page which is owned by a member of the HRWG/HBC who also could not be reached for comment.

The listed address for the organization is the Highbridge Community Life Center, where the monthly meetings the group holds presumably occur. However, repeated calls to the Life Center office went unanswered. Photos provided on the HRWG Facebook page show various events and festivals that have taken place along the river hosted by the group since 2011, the most recent being from October of 2013. According to the HRWG website the 2014 Harlem River Festival will be held from October 5th through the 18th. With the High Bridge opening soon, the area should be a large part of the festivities. With the lack of advertisement and information provided to residents, it remains to be seen how many from the Highbridge neighborhood will attend.