While residents in Elmhurst, Queens boast that their neighborhood is one of the most diverse and lively neighborhoods in New York City, for some New Yorkers the community in western Queens barely comes to mind. To make Elmhurst better known, 82nd Street Partnership, a non-profit economic development group in the neighborhood, is working hard to promote the neighborhood’s ethnic businesses.

“Our neighborhood stands out for diversity; 82nd street is one of the centers for food destination, and it may be the most diverse one,” said Sofia Davila, Director of Business Services for 82nd Street Partnership which was founded in 1990. “We market the district on our website and social media, reach out to communities, and hold events on a regular basis. Our goal is to help them promote their businesses and unique products beyond the scope of the neighborhood, reaching and attracting a wider audience that can turn into potential new customers.” 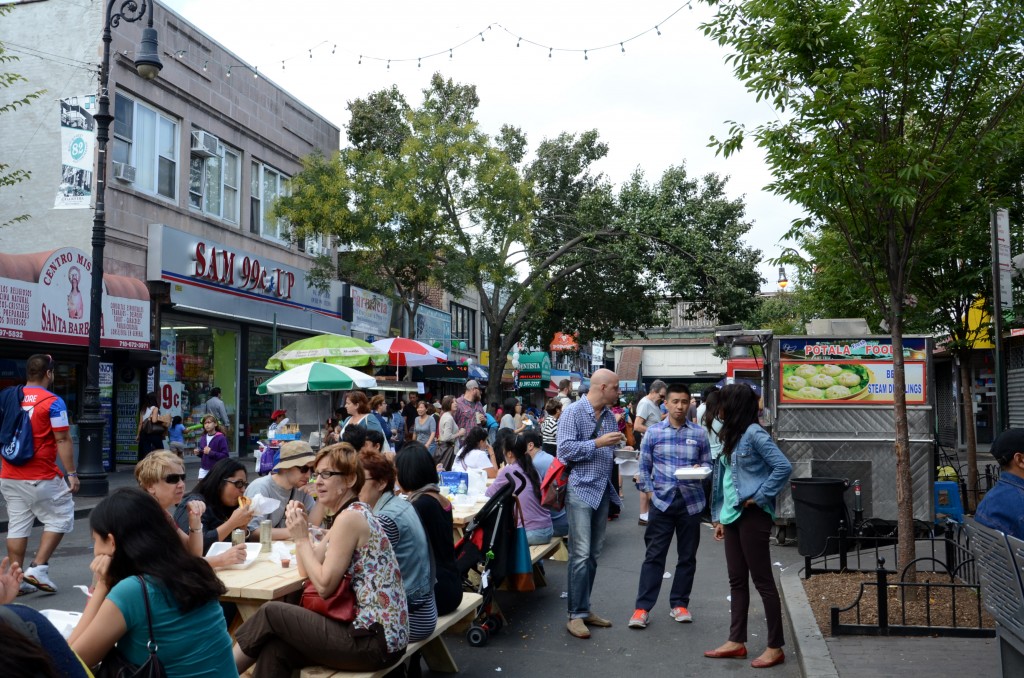 82nd street is crowed by visitors in the afternoon during the Viva La Comida festival. (Ruohan Xu)

On Saturday Sept. 20, the 82nd Street Partnership held a special food and music festival, the third annual Viva la Comida festival in the neighborhood. Over 50 restaurants and food carts participated, and thousands of people came to taste the food. Foods from Mexico, Colombia, China, India, Korea, Italy, etc. were served on the street, and multiple languages  could be heard in the resting areas where people gathered and enjoyed the day.

“Foods here are definitely cheaper and yummier and my girls love them too,” said Grace Andrews, who was born and raised in Elmhurst. She has come to the food festival every year since the beginning. This year, she brought her two daughters and invited friends from all over the city. She enjoyed the festival more this year because it was longer from noon untill night and had more sitting areas, she said.

Stella Heath and Andrey Patrov came from Brooklyn to enjoy the food. They were attracted by diverse and authentic foods, and especially liked the arepas from the Arepa Lady.

“It looks like a pancake, but it is called arepa, from Colombia,” Heath said. “It is like nothing you have tasted before, but it is wonderful.” Patrov added, “That is what you are looking for in New York—diverse and authentic things.” 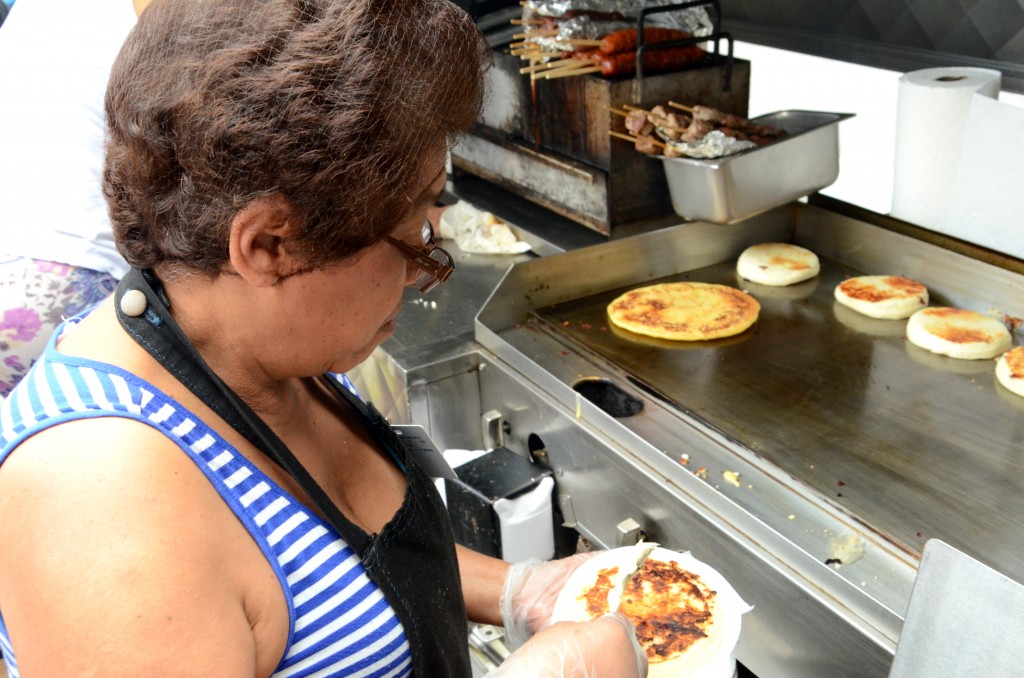 Alejandro Osorio, manager of the Arepa Lady, said his family started the business 20-30 years ago with one food cart. Now they opened a restaurant with the help from the 82nd Street Partnership, as the family gained more customers through the partnership’s marketing and the Viva La Comida festival.

“My mom is already very popular in the neighborhood, but the festival helps us earn much more money, a lot of money,” Osorio said. “The cart is seasonal, and we are not able to sell arepas in winter. We want to keep it going all year around. Our customers also want to have arepas everyday. Now we have the money and start the new restaurant. It is a dream come true for my family.”

Jeff Orlick, one of the founders of the Viva La Comida festival, has lived in the neighborhood for seven yeas and said he loves the culture, energy, and diversity of it. He wanted to promote the street’s small businesses because he saw it as “the future of New York City,” he said.

“New York is always changing, and this area has the seeds of change. This place is awesome, and everyone is interesting. This is the destination for people all around the world,” Orlick said.

The 82nt Street Partnership has already seen some progresses from their efforts. Local restaurants earn more than 30 percent during the festival than in a typical weekend, and many gain new costumers who keep coming back, according to Davila.

“We will continue promoting their businesses, and think about how we can market it because diversity is a huge part of New York, and here is the highlight of the culture in New York City,” she said.